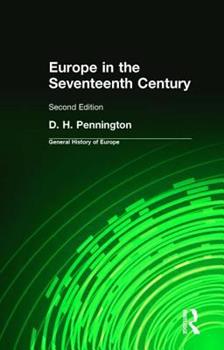 Europe in the Seventeenth Century

(Part of the General History of Europe Series)

As before, the second edition of this widely-used survey is in two main parts. The first analyses the major themes of seventeenth-century European history on a continent-wide basis. The second part moves on to outline political, diplomatic and military events in the various states and nations of the time.For the second edition all the chapters have been rewritten to take account of recent scholarship. Moreover, many new topics are discussed: the family;...

Published by Thriftbooks.com User , 20 years ago
Pennington's second edition to this work in the Longman "General History of Europe" series was certainly worth the effort. Pennington gives a good treatment of the sources for what we know about seventeenth-century Europe, the society, the economy, religion, science, governments, and political history, with the latter surely being most extensive in this work. However, the fact that the book is slightly biased towards political history should not too surprising, for the book is a general history, but also because the seventeenth century was one of statecraft (e.g., Jean-Baptiste Colbert under Louis XIV in France, the Great Elector Frederick William of Brandenburg-Prussia, Peter the Great of Russia, etc.) as well as copious wars. In noting the state, Pennington traces some states that began their ascendency during this period (e.g., Brandenburg-Prussia, Russia, etc.) as well as states that had reached the apex of their power and began (sometimes slowly) to decline (e.g., the Ottoman Empire, Habsburg Austria, Spain, etc.). France is probably afforded a slightly more extensive treatment than the other states. This is understandable considering the importance of France as a "great power" in this period, but also because it reflects the (often) deeper professional scholarship that has been done in French history.This work is one of the better general histories for this period and has a rather extensive bibliography for those interested in further study of the seventeenth history in Europe. It is a great introduction to the period for the student of the period and is often used as one of the texts for undergraduate history courses on the seventeenth history.
Trustpilot
Copyright © 2022 Thriftbooks.com Terms of Use | Privacy Policy | Do Not Sell or Share My Personal Information | Accessibility Statement
ThriftBooks® and the ThriftBooks® logo are registered trademarks of Thrift Books Global, LLC