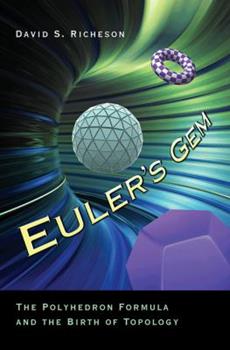 Euler's Gem: The Polyhedron Formula and the Birth of Topology

Leonhard Euler's polyhedron formula describes the structure of many objects--from soccer balls and gemstones to Buckminster Fuller's buildings and giant all-carbon molecules. Yet Euler's formula is so simple it can be explained to a child. Euler's Gem tells the illuminating story of this indispensable mathematical idea. From ancient Greek geometry to today's cutting-edge research, Euler's Gem celebrates the discovery of Euler's beloved polyhedron...

Published by Thriftbooks.com User , 12 years ago
Euler's Gem is a fascinating & well written book. However, it is also a pretty challenging read, one can not really sit back & read it straight through. But this is also what mathematics & learning is all about, as you often have to stop, re-read, & think a bit about what is being said. The claim is made that someone with only high school mathematics could read the book, & while this is probably true, it would be a steep climb. Especially as one progresses further & further into the book, many references are made to calculus, differential equations, & other related ideas, which the author does a fantastic job of explaining the ideas to people that never had the courses, but in the end it really would help the reader to have that knowledge beforehand. What makes this a five star book is that it is so rich in knowledge. The average person won't be able to read it in a week, but if you're willing to put the time into the book, you'll get a lot of out it as it really is a great introduction to topology. Even if you can't pick up all the concepts, you're sure to be able to pick up many of the neat tricks the author points out, such as the wedding ring knot, coloring map problem, etc. Overall, one of the best books I've ever read, & one day I'll probably have to re-read it again because it's just so rich & packed with knowledge.

Published by Thriftbooks.com User , 12 years ago
The title of the book is derived from the formula V - E + F = 2 that holds for any polyhedron. V is the number of vertices, E the number of edges and F the number of faces. First demonstrated by Euler, the proof of this result is surprisingly simple. As is the case with most such formulas and their proofs, there is at least one near miss in the history of mathematics. Descartes was close; in retrospect it is somewhat surprising that he didn't reach the appropriate conclusion. Of course, we are considering the great master Euler here, a giant of mathematics who was able to see things in his mathematical sight that people with the physical vision that he lacked overlooked. Topology is a relatively recent area of mathematics, one of the few that can be considered to have had a point of origin and a creator. Richison works through the historical mathematical preliminaries of the formula, the shapes it describes were well known to the ancient Greeks yet they were nowhere close to the formula. Some historical and mathematical background on Euler follows this and it includes some of his other accomplishments. The last chapters describe some of the results that follow from topology in general and Euler's gem in particular. One of the most interesting is the theorem of combing a sphere, where the conclusion is that there must always be at least one hair that stands straight up. This may seem like an absurd thing for mathematicians to be concerned about but it has a major conclusion, that at all times there must be at least one point on Earth where there is no wind. Even more significantly it means that there will always be a zero. Richison uses a large number of diagrams and formulas when needed, which is to his credit. Mathematics is based on equations so when an author deliberately avoids them in an attempt to increase sales, it is hard to claim that they are actually writing mathematics. This is an excellent book about a great man and a timeless formula. Well within the reach of the intelligent layperson, it is also a good book to use as a resource for a course where the students are required to make presentations. Published in Journal of Recreational Mathematics, reprinted with permission.

Published by Thriftbooks.com User , 13 years ago
i was given this book as a gift after taking a course on algebraic topology. while only some of the material appeared in both the book and the text i used for the course, i developed a much deeper understanding of the subject after finishing richeson's outstanding presentation of a difficult subject. the writing is efficient and enjoyable throughout. many of the chapters serve as interesting interludes or transitions to help clarify relationships between topics. i have searched high and low for similar books in topology without luck. richeson seems to have a unique gift for "popularizing" topology without losing the interest of those of us who appreciate the depth and beauty of mathematics.

More Evidence that Mathematics Is Beautiful

Published by Thriftbooks.com User , 13 years ago
If you want a popularized book-length treatment of string theory, you have two kinds of choices. Brian Greene uses no equations, save in an occasional endnote. Roger Penrose uses 1136 equation-filled pages to teach you all of mathematics you would need to know--although far too fast for anyone to learn it from Penrose alone. There is not much between Greene and Penrose. If you wanted a popularized book-length treatment of topology before Dave Richeson's Euler's Gem: The Polyhderal Formula and the Birth of Topology, you had no choice at all. This is a risky thing that Richeson attempts. Ian Stewart's 2007 book Why Beauty is Truth: The History of Symmetry cites the "conventional wisdom in science writing that every equation halves a book's sales." (34) On this basis, Richeson's book should have only one ten billionth of the sales of other books popularizing science. Yet Richeson pulls it off with a well-written, nicely illustrated book surveying the history of topology from Plato to Poincaré to Perelman. Richeson's book is accessible to an academically minded high school student, yet has something to offer the professional mathematican who happens not to be a topologist. There are no typos in the book. There is a useful, although not comprehensive index. (Richeson mentions flexible polyhedra -- see mathworld.wolfram.com/FlexiblePolyhedron.html -- for example, but the index doesn't.) The only slight confusion that I encountered is at page 157, which says that we have seen V-E+F = 2-2g before. We have not. However, on page 148, we saw V-E+F = 2 - 2T + P + 2C, so let P = C = 0 and rename T as g, and all is clear. Richeson's book ends on the theme of beauty, and well it should. It's a beautiful book! I bought three as Christmas presents for friends. You should buy one too.

I thoroughly enjoyed this book.

Published by Thriftbooks.com User , 13 years ago
I really enjoyed this book. I found that the David Richeson's writing style made this topic very accessible. I thought that there was just the right balance of history and math. Having little experience with topology, learned a lot about it. I was really astounded at some of the unexpected connections between "Euler's Gem" and different branches of math. Lots of fun!
Trustpilot
Copyright © 2022 Thriftbooks.com Terms of Use | Privacy Policy | Do Not Sell My Personal Information | Accessibility Statement
ThriftBooks® and the ThriftBooks® logo are registered trademarks of Thrift Books Global, LLC