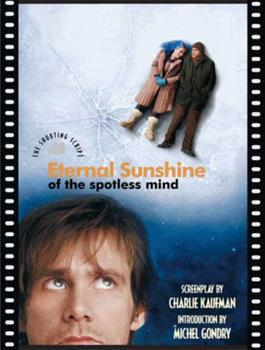 Eternal Sunshine of the Spotless Mind

In this illuminating script book, Charlie Kaufman, the Academy Award?-nominated screenwriter of Being John Malkovich and Adaptation, shares the logistical challenges of writing Eternal Sunshine of the Spotless Mind in a fascinating interview. Kaufman also provides commentary on stills from the movie, revealing remarkable details about the editing process, set construction, and shooting techniques that were used to tell this unconventional story. In...

Published by Thriftbooks.com User , 13 years ago
This is a unique, imaginative, well crafted screenplay by Charlie Kaufman. Like so many, I love the premise. "What if in your mail you find a kind of official card stipulating: 'We are acknowledging, Joel that Clementine has had you erased from her memory. Please do n't try and reach her." And yet in the hands of an average screenwriter the movie could have been an average Hollywood film full of gags and predictable characters. Instead Eternal Sunshine of the Spotless Mind, is an excellent plotted script where Kaufman instead of trying to get it right has celebrated and had fun with his creativity and constructed a brillant insightful story...Reminding us all of our own humanity and providing us to be a fly on the wall in the world of unforgettable characters. Even if your like myself who own the DVD there are gems in the script that ended up on the cutting room floor in particular the Velveteen Rabbit scene. Which is just beautiful.

This is a truly beautiful movie...

Published by Thriftbooks.com User , 17 years ago
This is a truly beautiful movie. I seriously think it is one of Jim Carey's best films. The cinematography is provocative and intelligent. The acting is flawless. And the plot is a well devised mesh of fantastical conception and blatant realism mixed with subtle humor. It should have one an award. It was certaintly better than Million Dollar Baby.

Published by Thriftbooks.com User , 18 years ago
This was a movie I didn't expect to like. I hadn't heard that much about it and wasn't all that enthusiastic about seeing another Jim Carey movie. Boy, was I pleasantly surprised. First of all, this movie is truly original. That's rare these days. It revolves around the premise that you can erase someone from your memories. In this case, the "someone" to be erased is Kate Winslet's character of Clementine. She is wacky and artsy, and plays against Carey's straightlaced character Joel perfectly. I had just seen an interview with Winslet before this movie and was amazed at her accurate American accent. Very well done. And Carey is brilliant. His toned down, not over the top portrayal of Joel was delightful and wonderful. This is the first time I actually thought of Carey as a very good actor. Both Carey and Winslet deserve an Oscar for this film. In addition, the film is beautifully shot as well. This could have been a very goofy movie, with a premise that was hard to actually get into and believe, but this film worked perfectly on all accounts: writing, cinematography, acting. I would recommend this film to anyone that wants to see a thoroughly enjoyable, funny, sweet, interesting, wonderful film that is unlike any you've seen before. From the author of The Difference Now, A New Dish, and At the Coffee Shop. (www.thedifferencenow.com).

Eternal Intrigue of the Spotless Screenwriter

Published by Thriftbooks.com User , 18 years ago
By fusing his already proven intellectual prowess with a warm, beating heart, Kaufman has devised his most affecting work yet.On its own terms, this is a lovely read - a rare screenplay that attains the readability of great fiction, rich as it is with deeply flawed, loveable characters. When compared to the Michel Gondry film it spawned, this truly reveals itself as a catch. The opportunity to study two media, two auteurs at the top of their game, and one heartbreaking story told in two strikingly different but profoundly similar ways is one rarely afforded to the movie lover; take it while you can. If the box office is any indication, it may soon be but a memory...

A script worth owning

Published by Thriftbooks.com User , 18 years ago
Charlie Kaufman has proved himself to far more than a screenwriter by now--a geniune auteur. ETERNAL SUNSHINE has all of the cerebral acrobatics of his earlier works, but far more heart. Beneath all of the inventiveness and camera tricks, there's one of the more real and honest love stories written in the past twenty years. Audiences don't BUY love stories easily nowadays, and Kaufman manages to pen two truly eccentric, difficult, and lovable people, and make us understand and accept the sacrifices they make in order to be together. I can't say enough about his work, and the great irony is that mainstream HOLLYWOOD movies are the medium for the most inventive writer in America today.
Trustpilot
Copyright © 2022 Thriftbooks.com Terms of Use | Privacy Policy | Do Not Sell My Personal Information | Cookie Preferences | Accessibility Statement
ThriftBooks® and the ThriftBooks® logo are registered trademarks of Thrift Books Global, LLC