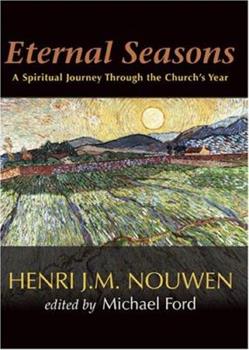 Eternal Seasons: A Spiritual Journey Through the Church's Year

For the first time in paperback and packaged in the unique look of Henri J.M. Nouwen books from Ave Maria Press, Eternal Seasons gathers selections for an entire liturgical year from over forty of Nouwen's books.Eternal Seasons is a unique look at the church year through the eyes of Nouwen, featuring Nouwen's reflections on a complete year of the church's seasons and feasts. Thoughtful introductions usher in each seasonal selection of passages selected...

Published by Thriftbooks.com User , 13 years ago
Eternal Seasons editor Michael Ford, a BBC writer/producer, interviewed Henri Nouwen for a TV show in 1992. He later took a leave of absence to write "Wounded Prophet: A Portrait of Henri J.M. Nouwen," published in 1999. As he gathered material, Ford discovered a batch of old sermons "on a range of liturgical themes" in the Nouwen archives. That discovery, and Nouwen's "immeasurable" influence on him, led to development of "Eternal Seasons." The book is divided into nine liturgical sections, each made up of a short introduction by Ford followed by passages from Nouwen's work that convey the spirit of the season. Reflections for feast days are also included. We examine the seasons as a path Nouwen found for his own spiritual journey, especially when he was confronted with difficulties. In describing that first TV interview and later in the book, Ford emphasizes Nouwen's conviction that "The spiritual life is a constant choice to let your negative experiences become an opportunity for conversion or renewal." The Dutch priest explains several "polarities" that we must all struggle to balance: joy and darkness; hope and despair; faith and doubt. These themes and the painstaking way in which Ford has selected, organized, and presented the passages offer a wellspring of inspiration for individuals and groups, used as is or in conjunction with lectionary readings.

Henri Nouwen and the Church Calendar

Published by Thriftbooks.com User , 14 years ago
This you'll want to keep handy to check out throughout the year. It won't give you details as to the church calendar day being recognized. But if you like Henri Nouwen's writings, you'll like the ordering of excerpts from his writings revolving around the year. And if you want more info on the entry, the internet will give you details.

A rich resource for any pilgrim

Published by Thriftbooks.com User , 15 years ago
Nouwen wrote as he spoke, so simple and yet so profound. Michael Ford has done us a great service in compliling Houwen's writings into the framework of the liturgical year. Those who follow the year will have rich food for their journey, but the book is not just for them. It offers anyone who wants to dig deeper into the Christian life a real companion on their travels.

Year-round Reflections for Individuals and Groups

Published by Thriftbooks.com User , 17 years ago
Eternal Seasons gathers, for the first time, selections for an entire liturgical year from 40 books written by Henri Nouwen, who lived and prayed the liturgical year as a way of connecting with the great mysteries of our faith. Michael Ford presents the writings in nine sections: Advent, Christmas, Epiphany, Lent, Holy Week, Easter, Pentecost, Transfiguration, and Recollection. Each section consists of an introduction and a collection of passages focused on a feast or saint commemorated during the given season. This resource is suitable for personal and group use. An group leader could open to any page within the appropriate seasonal section and find a short quote from Nouwen guaranteed to lead to a meaningful discussion.

An ideal introduction for a whole new generation

Published by Thriftbooks.com User , 17 years ago
Compiled and edited by journalist, lecturer, and broadcaster Michael Ford, Eternal Seasons: A Liturgical Journey With Henri J.M. Nouwen showcases a series of sermons on the great mysteries of the Christian Faith . Drawn from his forty books, Here are the late Henri Nouwen's responses to the spiritual seasons that, in their entirety, cover the entire liturgical year. Eternal Seasons is an ideal introduction for a whole new generation of Christian readers to Nouwen's thought and insights, and will engage a desire on the part of those readers to seek out Nouwen's earlier writings.
Copyright © 2020 Thriftbooks.com Terms of Use | Privacy Policy | Do Not Sell My Personal Information | Accessibility Statement
ThriftBooks® and the ThriftBooks® logo are registered trademarks of Thrift Books Global, LLC