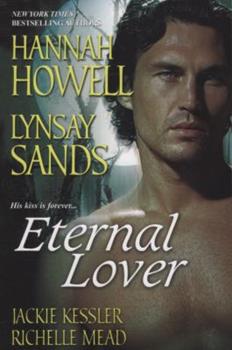 (Part of the Georgina Kincaid Series and Hell on Earth Series)

Theirs is a world of ancient desires and forbidden pleasures. They are men of mystery and women of seduction, wild creatures with the power to entrance and enchant, tease and tantalize. Enter their secret world, if you dare. . . The Yearning by Hannah Howell Alpin has lived for centuries with a lust that can never be quenched with mere physical pleasure. And then he meets Sophie whose own search for lasting love binds them together in a cloak of shimmering...

Published by Thriftbooks.com User , 13 years ago
Hanna Howell- "The Yearning" This story starts out in Scotland, year 1000 A.D. when a scorned witch named Rona is so deeply angered that her love has chosen someone else to marry and leaves her w/ child. She puts a curse on his descendants and inadvertently damns her own bloodline as well. Fast forward to 1430 B.C. a descendant of Rona, Sophie, has discovered the curse and tries to undo it. For her to be successful, she needs to find and convince one of the remaining bloodline of the cursed to risk everything he believes in and to trust her. Only then will his curse (and hers) be lifted. This story was a cute but predictable and I enjoyed it very much. Jackie Kessler' "A Hell of a Time" I was a bit disappointed by this short story. It was good but Jezzie seems to be so dependent on Paul and at times seems a little desperate. It's not just that she is flaky but she's an ex-succubus who seems so one dimensional, needy and dense. For someone to have survived for millennias, you'd think she would be a little less bratty. In this story Jezzie and Paul are on a romantic get away and are attacked by a nymph damned to remain in that forest by the King. Richelle Mead- "City of Demons" This story was the best out of the bunch. Richelle always delivers and never disappoints. Georgina and Seth are off on a little get-a-way weekend until Georgie's boss, Jerome, dumps his obligation on her. Georgie fills in Jerome's duty as a juror in the murder trial of one demon accused of killing another. I love the world Richelle builds. The idea that demons were once angels that had fallen really appeals to me. Georgie gets a once in a lifetime opportunity to sleep w/ Seth w/ no soul sucking repercussions but to get that wish she must do something vile first. Will she risk her hidden goodness to have one night w/ Seth? Lynsay Sands- "Bitter" In this story Keeran has been bitten by a vampire trying to save his father's life and avenging the death of his mother and sister. He is damned to hell, rejected by his small village and left to walk the earth alone. Two lonely centuries pass before he comes in contact w/ his love-to-be Emily. To finally be free of his loneliness he will have to gain the strength and bravery to let love him. I really enjoyed this little story.

Published by Thriftbooks.com User , 14 years ago
The stories in this anthology were very interesting and entertaining to read. I really looked forward to it because of Lynsay Sands, and I was not disappointed. Hannah Howell's story was also very good. It should be pointed out, though, that Sands's and Howell's stories were previously published in the anthology "His Immortal Embrace" with two stories different from "Eternal Lover." Jackie Kessler's and Richelle Mead's stories are both continuations of previous major releases. I never read these previous stories, and I felt that it would have probably helped to read them before reading the short continuations. Kessler's "A Hell of a Time" is the continuation of "Hell's Bells." Mead's "City of Demons" is the continuation of "Succubus Blues." So, I would suggest that you might get more out of these continuations if you read their prequels first and it would have probably made me appreciate the stories more too. Overall these stories were enjoyable reads, but after finding out that 2 of the 4 stories were previously published I have become curious to read their first anthology for the other stories they were published with.

Published by Thriftbooks.com User , 14 years ago
I like the four short stories in this book because they dealt with the "juice" part of the story line and not all the other fluff that usually comes with a full book. Each story had its own view on love and romance and that was refreshing. Overall, a good read. My daughter enjoyed it too.

Published by Thriftbooks.com User , 14 years ago
Loved this book! Four stories by some of my favorite authors under one cover. What's not to like? Jackie Kessler's story about Paul and Jesse and a trip to the great outdoors made me remember there is a good reason why I don't like roughing it. There are scary things in the woods. You can take the girl out of the city, but you can't take the city out of the girl. Well written and fast paced read. Richelle Mead's characters, succubus Georgina and her human boyfriend, Seth take a trip so Georgina can serve supernatural jury duty for her boss, Jerome. She gets caught up in solving the case and testing Seth's commitment. Entertaining glimpse into more of Mead's world...I am looking forward to her next Succubus book. Lynsay Sands surprised me with a historical story because I had only read her contemporary Argeneau Vampire books. She does a good job drawing you into her tale of a lonely vampire and the woman who brings light into his life. I found Hannah Lowell's historical story delightful. Taking place in Scotland, it deals with a curse between two families and what one woman is willing to go through to end it. Although I was puzzled as to why the stories were not all comtemporaries, I was pleased with them as a whole and felt entertained as I read. WHat more can you ask from an anthology?

Published by Thriftbooks.com User , 14 years ago
I loved this book, but I do have to say that I don't understand why the publishers put two historical re-releases with two new urban contemporary stories. Jackie Kessler's "A Hell of a Time" starring Jezebel the ex-demon was great fun. Although Jess is not a demon anymore, she still sees demons and other paranormals, and they won't leave her alone. She and Paul want to get away from it all, but they're not as alone as they think. Steamy and funny and fun! You might learn something about Frank Lloyd Wright while you're reading, too!! Can't wait for "Hotter than Hell," Jackie! Richelle Mead's "City of Demons" is great too. Georgina serves on a demon jury to help out Jerome, and gets more involved in the dispute than she bargained for. Her boyfriend Seth comes along for the ride, and their romance gets tested in ways Georgina hadn't bargained for. I really enjoyed the complexity of the issues of the story, and I can't wait for "Succubus Dreams," Richelle! Hannah Howell's "The Yearning" takes place in 1435 A.D. Once again I have to ask why the publishers put two sexy, fun, contemporary paranormal romances with two historicals. I wasn't sure I would like the two historicals, but I do have to say that I did. The Yearning takes place in Scotland, and I have to warn you that some of the dialogue is written in Scottish brogue, which kind of annoys me personally, but if you can get past that, it's a sweet story. I also enjoyed Lynsay Sands' "Bitten," about a woman saved from a ship wreck by a vampire, was also good. Worth it to get fresh stories on Jezebel and Georgina, while waiting for their next releases! A fun and unusual read.
Trustpilot
Copyright © 2022 Thriftbooks.com Terms of Use | Privacy Policy | Do Not Sell My Personal Information | Accessibility Statement
ThriftBooks® and the ThriftBooks® logo are registered trademarks of Thrift Books Global, LLC