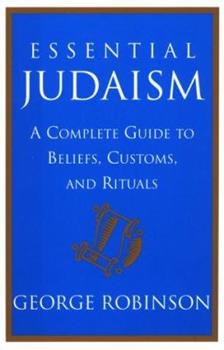 Essential Judaism: A Complete Guide to Beliefs, Customs and Rituals

This is a guide which tells you everything you need to know about being Jewish in a user-friendly way. It explains what Jews do, what they believe and why.

Dense, but well-written and thorough

Published by Evan , 2 years ago
I highly recommend this book to anyone curious about Judaism, Jewish or not. From customs and traditions to the Jewish people's vast, rich history; this book covers it all without being too boring or overbearing. I advise reading it in small sections at a time, as each chapter provides a lot of information.

much more than a primer

Published by Thriftbooks.com User , 16 years ago
as a jew making a recommitment to jewish practice after a 30-year hiatus, i needed a major brush-up. this book, i believe, was heaven-sent. i continually found myself saying out loud, "i didn't know that!" it covers every facet of judaism, from what to do and expect when you go to services, to the history of ancient israel, to the major philosophers, to how we as a people survived 2,000 years in exodus, to the rise of hasidism, to the effects of the holocaust on the religion, to the differences between the four major branches of judaism -- and everything in between. i flew through the 600-or-so pages and enjoyed not only the content, but robinson's writing style. his use of non-sexist language is refreshing. if the book piques your interest in specific areas, as it did mine, the bibliography points to sources where you can dig deeper. thanks, george, this book is a mitzvah.

Published by Thriftbooks.com User , 17 years ago
George Robinson returned to Judaism as an adult looking for spiritual centeredness, a deeper understanding of himself and his place in the world. He's a journalist, not a rabbi. His writing prowess is immediately evident, as is the fact that he has educated himself extensively in the material he treats. His book is primarily conceived as a broad-ranging educational text and guide for those who departed from the Judaism of their youth but are seeking 'something' or feeling drawn back. The book is actually a unique resource for anyone interested in Judaism. Being just such an 'anyone', Robinson's book is for me too, even though I'm not Jewish. Beginning with a chapter on prayer and ritual, it becomes apparent that the reader will need to familiarize himself with many Hebrew words to appreciate Robinson's discourse. There's no way around it, but it's well worth the effort. The book is so thoroughly interesting that, regardless of the language and length (500 pages plus appendices), it may not seem like an effort at all. Robinson's scholarship is generally exceptional. This reader was quickly struck with how fluid Judaism has proven to be. As the author states, "A people's ideas are informed by their history, and vice versa. . . and a lot of this book is about that relationship. . . There are some who would have you believe that Judaism is a transhistorical, immutable system of belief, but that just isn't true." A look at the topics treated might whet your curiosity: 1- Service of the Heart: Prayer and Ritual 2- Rejoice in your Festivals: The Jewish Year 3- Birth to Death: A Jewish Life Cycle 4- 613 Ways: Living a Jewish Life 5- In the Beginning: The Hebrew Bible 6- The Rabbis Said: The Talmud and other Rabbinical Writings 7- Jewish Mysticism: Emanations of the Eternal 8- The Philosophers: The Continuing Evolution of Jewish Thought 9- Beyond the Rabbis: How Judaism Got Where it is Today Appendices (5) and Glossary I expected that I would use the book only topically, that is, to educate myself on Kabbalist mysticism, the Zohar, rabbinical writings, Jewish philosophers (Buber, for example), the difference between Orthodox, Reform, Conservative, and so forth, in a piece-meal manner. In other words, use it as one uses a glossary or encyclopedia, which in a sense, this book is. But upon reading the Introduction I found myself venturing into the book the old fashioned way, from the first chapter (okay, so I jumped around a little too). Either way, it ends up being a reference resource simply because there is such a wealth of religious, philosophical and historical information. Thorough, thoroughly interesting, a book that may have no peers among books similarly conceived. Highly recommended.

Well-written and Balanced Book Essential To All Jews

Published by Thriftbooks.com User , 22 years ago
This book is extremely well-written and useful to the modern Jew. It takes into consideration the different branches in Judaism when it talks about certain subjects. It gives a comprehensive guide to how all of the holidays are celebrated, and it goes over the entire Jewish life cycle to name a few of the facsinating things that you'll find in this book. Every Jewish library should contain this book.

A treasure for the neophyte

Published by Thriftbooks.com User , 22 years ago
I am not new to Judaism, but I have a lot to learn...actually, that is an understatement...I have mountains to learn! Essential Judaism is the one book that all people interested in Judaism, whether just in passing, as a potential convert, or as an actual Jew, should own. You will learn about all phases of Jewish life...from prayer, festivals, and how to live Jewishly, to Torah, mysticism, and philosophy. The narrative is very in-depth for such short overviews of all the various subjects and there are also sidebars to further elaborate on some things, including a listing of the entire 613 mitvot from the Torah. This book has been a valuable learning tool for me.

A lot more than essential!

Published by Thriftbooks.com User , 22 years ago
Over the last few years I've read my way through many of the popular "how-to"s and primers of Jewish literacy, books by Telushkin, Donin and Dosick, for example.George Robinson's Essential Judaism is by far the best of the lot. Subtitled "A Complete Guide to Beliefs, Customs, and Rituals," the book is indeed that and a lot more. In the course of its 650 pages, the book lucidly explores Jewish worship and practice, sacred literature (Torah, Talmud, other rabbinical works), Kabbalah and mysticism, holidays, life cycle events, dietary laws, and Jewish history and denominationalism.The treatment Robinson gives such topics as the prayer service, the blessings of daily life, and the evolution of contemporary Judaism is surprisingly deep for a work of this kind.In particular, his chapters on the mitzvot ("Living a Jewish Life") and non-Rabbinic Jewish thought ("The Philosophers: The Continuing Evolution of Jewish Thought"), stand out not only for their all-around comprehensiveness, but also for their originality of ideas and presentation.Essential Judaism is a well-organized and well-indexed book that can be enjoyed read from beginning to end, dipped into arbitrarily, and kept nearby as a handy reference. In just the month or so I've had it, I've already had several occasions to use it in this last manner, to answer questions or explain references I've stumbled over in other books, and it hasn't failed me yet. Most books like this are written by rabbis, and some have particular agendas, ideological or religious. I think the very fact that Robinson is not a rabbi but a journalist who immersed himself over several years in the literature and lore of Judaism, processed all this information from all points of view, consulted various authorities and experts, and then found a way to explain it that was both accessible to the general reader yet utterly worthy of the importance and depth of the subject matter, goes far toward explaining why this book instantly arrives as the best one-volume reference to Judaism.Essential Judaism is a lot more than "Essential." It's great. It'll make gift-giving time - whether birthdays or Bar-Mitzvahs, Chanukah or conversions - a lot easier. And when friends ask for a recommendation for that one book -- the one that is, besides THE book -- George Robinson's Essential Judaism will make that a lot easier, too.
Trustpilot
Copyright © 2022 Thriftbooks.com Terms of Use | Privacy Policy | Do Not Sell or Share My Personal Information | Accessibility Statement
ThriftBooks® and the ThriftBooks® logo are registered trademarks of Thrift Books Global, LLC