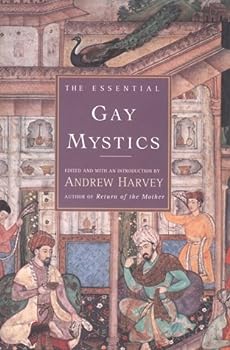 Compiled in this volume are the writings of some of the best-known thinkers and same-gender (and bisexual) lovers of all time. Poems and quotes by such notables as Sappho, Sophocles, Walt Whitman, Shakespeare, Emily Dickinson, Thoreay, Melville, Cocteau, Virginia Woolf and many more, attest to their same sex muses and partners and their brilliance in elucidating their feelings.

A valuable resource for the study of mysticism and spirituality

Published by Thriftbooks.com User , 13 years ago
Andrew Harvey was born in south India of British parents in 1952 where he lived until he was nine years old, a period that he credits with shaping his sense of the fundamental unity of all religions and providing him with an uplifting vision of a world infused with a sense of its own sacredness. He left India to attend private school in England and entered Oxford University in 1970 as a history student. Notwithstanding the fact that he became the youngest person ever awarded a Fellowship to All Soul's College, among England's highest academic honors, at the age of 21, by 1977 Andrew Harvey had become disillusioned with life at Oxford and returned to his native India. The following year he met a succession of Indian saints and sages and began his long study and practice of Hinduism. In 1992, he met Dom Bede Griffiths in his ashram in southern India near where Andrew Harvey had been born. It was this meeting that helped him synthesize the whole of his mystical explorations and reconcile Eastern with Western mystical paths. Andrew Harvey has taught at Oxford University, Cornell University, Hobart and William Smith Colleges, the California Institute of Integral Studies, and the University of Creation Spirituality as well as at various spiritual centers throughout the United States, and maintains a spiritual direction practice in New York City. He today lives in Nevada with his husband Erick. Generally, Western culture separates sexuality from spirituality in very much the same way that it separates the sacred from the events and processes of everyday life. It may therefore come as something of a shock to the average reader that there exists such a category of beings as `gay mystics' identified synchronously by both their sexuality and their pursuit of the sacred. Nonetheless, it has long been accepted that gay persons of both genders have always figured prominently and in significant numbers among the artistic and cultural (and spiritual) elites of societies around the world. While most cultures have never officially recognized or sanctioned gay sexual activities (though exceptions exist), many have at least quietly tolerated the presence of gay persons given the out-sized contributions of such individuals to their societies. As in other realms of human endeavor, this has been reflected in the religious and spiritual realm. From ancient Greek society to today's varied cultures around the world, there are commonalities of spirit and sensibility that can be traced as common threads. This text, part of the 'Essentials' series, examines various mystical and spiritual writings by gay persons across time; however, not all the authors represented in this text are gay. Some (such as Shakespeare) might have been bisexual, or heterosexual, but still seem to be able to tap into that voice which seems most representative of and represented in the gay community. TEGM brings together a broad selection of gay, lesbian, bisexual and transgendered writers who

Published by Thriftbooks.com User , 18 years ago
It has been an accepted fact for some time that gay persons of both genders have always figured among the artistic and cultural elites of societies around the world. While most cultures have never officially recognised or sanctioned gay sexual activities, many have at least quietly tolerated the presence of gay persons given the contributions of many talented individuals to society. This has likewise been reflected in the religious and spiritual realm.From ancient Greek society to today's varied cultures around the world, there are commonalities of spirit and sensibility that can be traced as common threads. This text, part of the 'Essentials' series, examines various mystical and spiritual writings by gay persons across time; however, not all the authors represented in this text are gay. Some (such as Shakespeare) might have been bisexual, or heterosexual, but still seem to be able to tap into that voice which seems most representative of and represented in the gay community.There are nine chapters to this text, exclusive of the introduction by Andrew Harvey. The first two chapters look at ancient Greece and Rome, including Sappho (of course, perhaps the most famous of the gay ancients), Pindar, Empedocles, Aeschylus, Sophocles, Euripedes, Plato, Theocrius, Vergil, Horace, and poems from the Galli, gender-variant priests of the Cybele.Chapters three through five look at native American traditions, Far East, and Persian/Sufi traditions. These include We'wa, Hasteen Klah, Qu Yan, Kukai, Zeami, Basho, Attar, Sadi, Hafiz, Iraqi, Jami, as well as the modern Mohawk descendent, Maurice Kenny.Chapters six through nine look at the more modern Western culture, from Renaissance times (Michelangelo, Shakespeare, Sor Juana Ines de la Cruz) through to the nineteenth and twentieth centuries, where the names become too numerous to mention, but are well known - names such as Walt Whitman, Oscar Wilde, Arthur Rimbaud, Virginia Woolf, D. H. Lawrence, Dag Hammarskjold, and H.D. (Hilda Doolittle). In his introduction, Harvey likens the gay person to the mystic in that they are both risk takers and adventurers of a sort. They eschew conventionality of some sorts, even as they might embrace conventionality and tradition of a different sort. Interestingly, one of the commonalities of many mystical traditions and paths is that for a true mystical deepening and enlightenment, the masculine and feminine aspects should be blended and cooperative within a unified spirit. Gay experience can often relate to this. Harvey has purposefully concentrated on those expressions that emphasise a breaking down of dualisms and barriers - those visions that look to eliminate the gap between heaven and earth, body and spirit, heart and mind, male and female. Some of the authors here have never been included in a collection such as this. Some yearned for silence and solitude during their lifetime. Others sought expression and voice, but couldn't find such. Harvey also talks

Published by Thriftbooks.com User , 19 years ago
As a Westerner brought up in a culture that separates sexuality from spirituality, it had never occurred to me there could be gay mystics who could be identified. Quite frankly, I had never given much thought about any kind of sexuality of the mystics. I knew that St. Augustine regretted his profligate youth, and that St. Francis of Assisi was a notorious hoodlum, but the idea that they had had sexual desires never occurred to me. Perhaps I was naive, and probably the closest I came to such thoughts were from Nikos Kazantzakis' book, Zorba the Greek, (the movie starred Anthony Quinn), which underlined the conflict between flesh and spirit,between Dionysus (sometimes called Bacchus) and Apollo. In his greatest film, Kazantzakis also carried this conflict into the life of Jesus called The Last Temptation of Christ. Those who did not understand this theme picketed the movie houses at the time of its release. Look at Umberto Eco's The Name of the Rose. You may remember that Sean Connery won a British Academy award for best actor in this story of 14th century monks in an Italian abbey where someone is committing many murders. Both of these stories have homosexual incidents in them. Yet, somehow, I could understand that; after all, these were sequestered men living alone without women, similar to military or prison life and homosexual tensions are unbearable for some.The evolution of psychological theories since Freud, Jung, and Adler has moved to an "integral approach," linking body, mind and soul in balance as a holistic unit. In the past, spiritual and other psychologists have treated body, mind and soul as if they were separate entities, whereas, in order to reach the wholeness of spirit, the oneness of the universe, and we must include our bodies and minds. The desires of the flesh, the ideas of the mind, and the luminosities of the soul--all are perfect expressions of the radiant Spirit that alone inhabits the universe. Physical exercise, vitamins, if necessary, sufficient sleep, a time for relaxation, and a healthy sexual life for the body; good reading and challenging creative ideas for the mind; and the joy of the here and now for the soul as observer. The word "mysticism" means a direct intuition or experience of God, what Abraham Maslow called a "peak experience." This will frequently happen to almost everyone who is taken breathless at a sunset, a soaring mountain, or just waking up one day feeling exhilarated for no reason at all. A mystic is a person who has had such a direct experience, not merely from accepted religious beliefs but from first-hand personal knowledge. There is no intermediary of priest, rabbi, or shaman. In addition, mysticismneed not be religious or theistic, but can express itself in art,literature, music or poetry. The other word, "gay," is slightly more difficult to define because it is understood in such a narrow and usually limited construct. Gay usually refers to a middle-class homosexual male living in the West

Published by Thriftbooks.com User , 22 years ago
Andrew Harvey has assembled an amazing collection of Gay mystics and their writings. His arrangement of mystics throughtout history and by culture is well suited to this type of study. I enjoyed the profiles of each mystic and sailed from one to the next. The writing of these ecstatics and enlightned ones was truly a blessing to find. I told a co-worker I was reading about gay mystics and she said "I didn't know there were any". The next day, I was able to show a deluge of them via the book and her own androgenous currents broke through. Thanks Andrew.
Trustpilot
Copyright © 2022 Thriftbooks.com Terms of Use | Privacy Policy | Do Not Sell My Personal Information | Accessibility Statement
ThriftBooks® and the ThriftBooks® logo are registered trademarks of Thrift Books Global, LLC