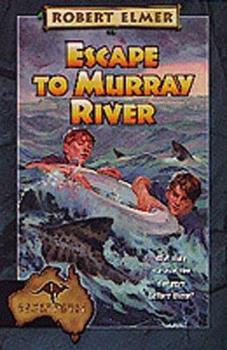 (Book #1 in the The Adventures Down Under Series)

Book 1 in a series of 8Alone in a wild land, thousands of miles from home...Twelve-year-old Patrick McWaid's world is turned upside down when his father is framed for a crime and sent on the last... This description may be from another edition of this product.

Published by Thriftbooks.com User , 22 years ago
I Really liked the Escape to Murray River book. I liked it because I love to read.It was fun to read because it is mysterious.

Published by Thriftbooks.com User , 22 years ago
We think Escape to Murray River is a great book for almost all kids. It makes you want to read more and more,you never want to stop reading once you start. It really makes you think that this is really happening to you. We think you will really like this/these books.

Toatally Awesome for U

Published by Thriftbooks.com User , 22 years ago
Jessica 4/10/00 This book is really awesome. If you like adventure,you should read this book. It`s filled with excitment, suspence,and a little romance. Robert Elmer puts very good details in his stories. Patrick, the main charecter is seperated from his family. Along with his new friend Jefferson. Patrick struggles to find his sister Becky ,his brother Micheal,his mother Sarah McWiad,and his father John McWaid, who was sent from Dublin to Australia. John McWaid was framed for being a Fenian in a bribe scandle, by Mr. Burke and head of chief police. Now Patrick tries to find his parents. So hold on to your seats and enjoy the ride with Patrick and everyone else.

This book is TOTALLY AWESOME!!!

Published by Thriftbooks.com User , 24 years ago
This book starts getting exciting in the FIRST chapter! Patrick's father, John McWaid, is convicted of somthing he didn't do and is getting sent on a prison ship to Australia. The rest of the McWaids follow only to get in deep trouble when they find out that the man that wants John McWaid dead, Conrad Burke, followed them TOO!! This series, Adventures Down Under, is full of adventure.
Trustpilot
Copyright © 2022 Thriftbooks.com Terms of Use | Privacy Policy | Do Not Sell My Personal Information | Cookie Preferences | Accessibility Statement
ThriftBooks® and the ThriftBooks® logo are registered trademarks of Thrift Books Global, LLC