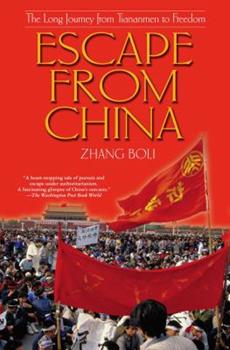 Escape from China: The Long Journey from Tiananmen to Freedom

Who can forget the images, telecast worldwide, of brave Chinese students facing down tanks in Tiananmen Square as they took on their Communist government? After a two-week standoff in 1989, military... This description may be from another edition of this product.

Published by Thriftbooks.com User , 12 years ago
This is a fast paced, insightful account of a dramatic journey in (and out of) China. I like the attention to detail the author pays to daily life aspects.

Escape From China: The Long Journey from Tiananmen to Freedom

Published by Thriftbooks.com User , 17 years ago
This book provides a great view into the life of Zhang Boli, the Chinese culture, and the powerful hand of a sovereign God. Yes, the book contained explicit language; however, after visiting with Pastor Zhang Boli, I came to understand that the translating was done by a foreign writer who used lude American language. Pastor Boli, with his very limited English, was not able to read the final production so was unable to even identify the kind of language used in his story's English version. This is an exciting story that is even more awe-inspiring when one realizes that Zhang Boli is still alive and well, pointing many Chinese to Christ in America as well as abroad.

A Gripping Story of Bravery and Determination Beyond Belief

Published by Thriftbooks.com User , 18 years ago
First, a short response to the review "telling truth or not" by "a reader". Shortly after the June 4th massacre the Chinese government broadcasted on television a video (apparently taken by the secret police) mockingly claiming that "while the 'poor worms' were on hunger strike, the leading 'turmoil elements' were eating in local restaurants using the donations intended for the movement." Almost immediately after the broadcast a university student in Hong Kong (a student of Chinese Universtiy of HK, if I remember correctly), whose face also appeared on the video, came out and clarifed that the dinner took place AFTER the hunger struck (the hunger strike ended at 10:00p.m. May 16). He was a representative of the universtiy students from HK, and he invited the leaders for dinner and he paid the bill -- no money was used from donations. When the video was replayed in slow motion, one could see what they were eating and would appreciate that it was indeed a very, very simple meal. One may find that the way the officers conduct their business and the way the commoners response are somewhat beyond believe. I know that the author is genuinely telling the truth, for I was detained in China twice, once for a month and once for 3 days. I have read the original Chinese version of the book and also some background material about the author. Within three months after he arrived at US he was diagnosed to have final stage liver cancer. The auther immediately started writing his memoir in the hospital bed hoping that he would leave something valuable for his daughter Little Snow. Miraculously his cancer was gone when he finished writing his book!

Cat-and-mouse game between government and dissident

Published by Thriftbooks.com User , 19 years ago
Escape from China is a memoir of a Tienanmen demonstration student leader's 2-year harrowing dodge and escape from Communist China. The original Chinese edition postponed its publication until 1998 (almost 10 years after the massacre) for fear of the government's purge of those who helped Zhang Boli flee the country. Zhang Boli, 26 years of age in 1989, was a graduate student of the Writers' Class in Beijing University, the most prestigious institution of the country. Along with Chai Ling, Wuer Kaixi, Li Lu and other university students, Zhang organized a pro-democracy campaign that sent some one hundred thousand students from all over the country to Tienanmen Square in Beijing. The demonstration and hunger strike, the largest and the most overt of its kind since the 1976 April Fifth Campaign, resonated throughout the country and won support from workers and Beijing civilians. The road to Tienanmen originated from the death of Hu Yaobang on April 15. The national mourning of the former secretary lent it a premonition to a horrible historical event that will be seared into memory of Chinese people. Zhang, in taut manner and rabid details, chronicled the events that led to what the Western world claimed to be the darkest and bloodiest day of modern China-June 4,1989, when the Communist Party ordered troops to pull into Beijing and enforced martial law. From the evening of June 3 to dawn June 4, blood splashed all over the capital and mingled with smoke wafting from vehicles ablaze. Party Secretary Zhao Ziying was forced out of office for his open support for the student demonstrators. While the National People's Congress opposed sending troops into the capital, the Party seized to disperse the students and end the movement by all means. The students and civilians simply underestimated the Army's brutality and were blinded by their naivete. Nobody who has not lived through (and witnessed) the massacre can imagine the terrible burdens imposed on ordinary citizens who live under a totalitarian regime. For two years, Zhang lived the life of a fugitive-he was among the 21 most wanted insurgents who would most likely to be sentenced to death. An executive member of the Preparatory Committee in Beijing University, the editor-in-chief of the News Herald, the deputy commander of hunger strikes, and the President of the Tienanmen Democracy University (a term that refers to the new regime resulted upon the fall of Communist Power, in which people from all over the country can enjoy freedom of speech and rights), Zhang Boli bore the most severe accusations from the Communist Party and was deemed an immediate threat to national security. Zhang fled to Soviet Union and was brought back to the China. He hid in huts along the river banks in Heilongjiang (the northernmost province of China) with the help of friends, distant family relatives and policemen who disapproved of the Party, Zhang settled down as a farmer and lived under a fake identity. His little daughte

Published by Thriftbooks.com User , 20 years ago
I have read the original Chinese version of the book, and found the conversations the most interesting. There are indeed times when the language becomes vulgar - the dialogues between the commoners and the officers, for example - but this shows the author's honesty in writing his book. I found the chapter dealing with his journey to the Soviet Union the most brilliantly written. The author goes through some reflection, admitting the mistakes of the student leaders, including his own. His journey witnesses his change from playing the role of an intellectual to that of a commoner, and it is through this change that he truly understands the fate and lives of the Chinese people. The relationship (and its development) between the author and his wife is very sad, but worth the reader's attention.
Trustpilot
Copyright © 2022 Thriftbooks.com Terms of Use | Privacy Policy | Do Not Sell or Share My Personal Information | Accessibility Statement
ThriftBooks® and the ThriftBooks® logo are registered trademarks of Thrift Books Global, LLC