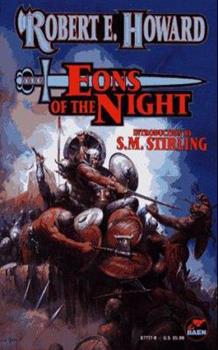 (Book #5 in the The Robert E. Howard Library Series)

Eons after the human race successfully battles Earth's previous owners for possession of the planet, the defeated gods and demons jealously seek to regain control, and a band of determined heroes becomes humankind's only chance for survival. Original.

Published by Thriftbooks.com User , 19 years ago
Robert Howard, author of the short stories collected in "Eons of the Night," is best known for creating the Conan stories. Howard was so successful with Conan that countless authors are writing new stories using the ideas Howard left behind after committing suicide decades ago. But Howard also wrote lots of short stories that are as memorable as anything he ever wrote using Conan as a character. If the collection of stories in "Eons of the Night" is any indication, Howard's suicide robbed fantasy fans of a truly brilliant writer on par with Lovecraft and others in the genre.In "The House of Arabu," a pre-Nordic warrior wanders into ancient Sumeria and confronts a horror beyond time and space. A curse laid against him for killing a priest leads him to the Sumerian underworld, a rather unpleasant place filled with the spirits of the deceased and other strange beings."The Garden of Fear" is set in some unknown time millennia ago. Again, a pre-Aryan warrior and his woman confront a flying beast hiding out in a tower in the midst of a field of flesh eating flowers. This is one of the better stories in the collection. Hunwulf, the warrior, figures out a clever way to get to the tower to save his woman. This is an entertaining story that should have been expanded into a bigger tale."The Twilight of the Grey Gods" is the story of how the Irish threw out the Scandinavian invaders at the battle of Clontarf. The "Grey God" refers to the Norse deity Odin, who makes an appearance or two during the course of the story. The battle sequences in this one are phenomenal."Spear and Fang" is arguably the least interesting story of the lot. In this short tale, Howard takes us all the way back to the age of Cro-Magnon and Neanderthal man. The Cro-Magnons are winning the battle of evolution, but the Neanderthals are still hanging on by hiding out in the forest and attacking the Cro-Magnons whenever they get the chance. Surprisingly, this is a love story, albeit one of the strangest ones ever written. Romance authors have nothing on Robert Howard!"Delenda Est" is a quick story set in the later days of the Roman Empire. The barbarians are running amok and Rome is in a precarious position. A delegation of Goths is on their way to Rome when a ghost out of the past pays a visit. It seems this ghost is a famous Carthaginian with an old grudge against Rome, and he is determined to see Rome punished for its sins."The Marchers of Valhalla" is fantastic. This story alone is worth the price of the book. Texas is the unlikely setting of this story, although it is a Texas none of us would recognize. Delving far back into prehistory, Howard introduces a band of pre-Nordic warriors who travel the world in search of battle and plunder. When they reach the city of Khemu, they discover a city that needs help fighting off an invading army and find a goddess locked in a local temple. The action scenes are again excellent in this tale."Sea Curse" and "Out of the Deep" are two stories about

Some of Howard's less famous heroes

Published by Thriftbooks.com User , 19 years ago
Most of the tales in this volume are in 1st-person; however, the reader would do well to remember that sometimes stories may chronicle a *deceased* narrator. For one thing, the style I refer to as "flashback/present" involves a present-day narrator who, in the midst of the present-day story, recalls a dramatic story of a past life, which (while complete in itself, as a story) fills in background for the present story. Some stories end in tragedy, some in triumph - and others in both."The House of Arabu" (a.k.a. "The Witch from Hell's Kitchen") - As in many Howard stories, the protagonist is a northern warrior far from his birthplace: Pyrrhas, an Argive warrior serving as general of mercenaries in Nippur. Since he burned Anu's temple, no priest will help when the night spirit Lilitu marks him for prey. Pyrrhas extracts a name from his mistress, Amytis, of one who might help: Gimil-isbi, an apostate priest turned diabolist. But did pain bring the truth out of Amytis, or did she lay a trap for hate of Pyrrhas?"The Garden of Fear" - Flashback/present, courtesy of James Allison's remembrance of a past life. (In this life, a riding accident left him with the need to live in the past.) As Hunwulf, the narrator once fell in love with Gudrun, and the pair fled from the vengeance of the Aesir tribe after Hunwulf slew Gudrun's promised mate for her sake. Having fled across terrain that no one less desperate would attempt, they fancied themselves safe when they reached a peaceful little village on the far side of the mountains. They didn't understand the villagers' signs of distress at their intention of travelling further south, not sharing a common language - until the assault of a winged fiend, and its kidnapping of Gudrun, made their fears all too plain...If this one appeals to you, see also Howard's "Wings in the Night" in _Solomon Kane_, and Marion Zimmer Bradley's _Falcons of Narabedla_."The Twilight of the Grey Gods" (a.k.a. "The Grey God Passes") - One of Howard's depictions of the battle of Clontarf, beginning well before the battle. See also "The Cairn on the Headland" in _Beyond the Borders_, in which the aftermath of the battle is remembered (somewhat differently) in a flashback."Spear and Fang" - Often Howard depicts humanity as under siege from other species who once owned the Earth - the snake-people fought by Kull, for example. His treatment of this theme is much less supernatural than that of his friend Lovecraft, but if you like one, try the other as well. In this tale, a Cro-Magnon tribe lives in a forest haunted by monstrous Neanderthals, although neither tribe, of course, uses those terms. The maiden A-ea fears far more than rape when she's captured and borne away through the forest."Delenda Est" - The Vandal conqueror Ginseric and his people are faced with the same problems the Romans had when they conquer Carthage: a small knot of aliens ruling a huge area, too small a group to really change the fundamental character of the place. Whe

Pulp fiction at it's best.

Published by Thriftbooks.com User , 23 years ago
This book contains ten short stories of the supernatural adventure vein. There is also an excerpt of a letter from REH to HP Lovecraft that is very enlightening. Sadly , the book starts out with possibly my least favorite of all the stories in this volume. Thank heavens the rest of the book is classic pulp fiction done right. The very classic "Twilight of the Grey Gods" is included in this volume (#5) of Baen's REH Library. Also in this volume are some of the great racial memory yarns like "Garden of Fear" and "Marchers of Valhalla." There is also Howard's first published short story "Spear and Fang." Two tales of one of Howar's lesser creations, the modern sea village of Faring town, are also herein along with the cult-status yarns of DeMontour the werewolf. All in all , this is one of the better collections of Howard stories currently in print.
Copyright © 2020 Thriftbooks.com Terms of Use | Privacy Policy | Do Not Sell My Personal Information | Accessibility Statement
ThriftBooks® and the ThriftBooks® logo are registered trademarks of Thrift Books Global, LLC