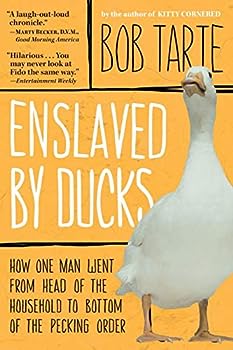 This description may be from another edition of this product. The book that Entertainment Weekly called "hilarious," Publishers Weekly declared "a true pleasure," Booklist called "heartwarming," and the Dallas Morning News praised as "rich and funny" is now...

Published by Thriftbooks.com User , 16 years ago
Do you ever read a book and find yourself saying over and over again, 'I wish I wish I wish I had written this.' I wish I had written "Enslaved by Ducks" (well, I'd have to call it 'Enslaved by Cats.') It is both hilarious and touching: a sort of "Ring of Bright Water" as authored by Dave Barry; except it's not about otters. It stars the eponymous ducks, along with surly parrots, turkicidal turkeys, parrotophobic cats, starving baby starlings, duck-eating raccoons, woodwork-munching rabbits, and the occasional long-suffering veterinarian--I love the way this author lists all of his vets by name at the front of the book, along with hints about their practice: "prescriber of questionable ointments;" "doesn't do turkeys;" "'So you've been bad-mouthing our practice.'" Author, Bob Tarte never meant to end up with a menagerie, but when he and his valiant wife, Linda moved to an old farmhouse near Lowell, Michigan (hold up your right hand and point vaguely at that sort of sinkhole in your palm, way beneath your ring finger), the inevitable occurred. Linda was an animal lover, and they now had lots of property and a barn. Binky, the Dutch rabbit with no social skills was first. "Wouldn't it be fun to have a little animal hopping around the house," asked Linda, and after a long and futile (and funny) argument from the not-so-animal-loving Bob, in hopped their first tenant--and not into the drafty barn. I used to think rabbits would be a cinch to own, until a friend of mine ended up with two from the local animal shelter. Bob made the same belated discovery, but by then his wife was on a roll. (Way back in the Neolithic era of my own marriage, when my husband and I were owned by our first permanent cat, we had to take her to the vet because she was scratching her ears bald. Dr. Platz suggested that she was bored. What we needed was another cat to keep Wendy company.) This is sort of what happened to Bob. And if you think one rabbit or one duck is pretty much like another, you need to read this book. I'm definitely going to buy a copy for my two-bunny, four-cat, two-beagle-mix friend. Trust me, this is not just another cute pet book. The author delves deeply into the bond between human and non-human life-mates, and like the marriage-bond, it's not all sweetness and light. At least my husband doesn't chew holes in the woodwork and poop in my coffee.

Published by Thriftbooks.com User , 17 years ago
Bob Tarte has eloquently captured the animal lover's viewpoint in this hilarious and touching book about coexisting with our furry and feathered friends. Initially beginning with one tyrannical rabbit, Binky, and eventually growing into a menagerie of rabbits, ducks, geese, turkeys, cats, parakeets, and assorted other creatures, Tarte relates all the joys and tribulations of being an animal lover. The relationships between the animals (especially the birds) are wonderfully recreated, as is the relationship between himself (and his wife) and all the animals. The joy of discovery when a new animal is brought into the fold (and the humorous exploits of accommodating all of them), the amazing scheduling impacts of all the animals on their lives, and the harsh reality of coping with the loss of a beloved animal are all poignantly told in a manner that makes it hard to put the book down. I am a diehard animal lover, but my hat is off to the Tartes for the patience and love they show daily to their huge multi-specied zoo. I highly recommend this book for anyone who loves animals!

An Absolute Must-Read for Pet Slaves of Every Variety

Published by Thriftbooks.com User , 17 years ago
Bob Tarte's Enslaved By Ducks is a laugh-out-loud funny, beautiful, and insightful book about how he and his wife Linda live with and care for their vast menagerie of animals in rural Michigan. This book was in the Staff Picks section of the bookstore and I'm so glad I plunked down the hardcover price. The entertaining and often touching tales of Bob's life with a seemingly endless number of animals brought lots of smiles to my face and even had me afraid to read this book in public. You never know when you're going to bust out laughing with this one, but I'd estimate that once on every page is a fairly good guess. If you've ever toyed with the idea of starting your own Noah's Ark, here's your reality slam. Don't get that third, fifth, or tenth pet without reading this book first!It started innocently enough with a bunny named Binky. Being a bunny slave to two angelic/demonic lagomorphs myself, I found it perfectly fitting that his story should start with a bunny rabbit. Rabbits hypnotize their owners into believing that they must acquire more rabbits, and where it stops no one can say. There are animal tales aplenty here with a strong emphasis on the avian variety. Parrots, ducks, turkeys, geese, starlings, you name it. If birds are your fancy, you definitely don't want to miss this read.Individuals who struggle with depression will also find a kindred spirit here, as Bob openly shares his experiences with depression and how the daily routine of caring for all his animals affected him for the better.Every side of being a devoted pet owner is represented here, including the sadness and grief when a special pet dies or when pets suddenly abandon their posh digs for the call of the wild. The upbeat and hilarious commands the lion's share of the book, though, and many passages are to be read more than once as you marvel at the intelligence and antics of Bob and Linda's critters.Contribute to the care and feeding of the Tarte Bunch now by picking up this book Today. Don't wait for the paperback. If you're a pet owner, you know vets and feed don't come cheap.Thanks, Bob, for sharing your brood with us. It enlarged my fondness and affection for my own furkids. Maybe I'll even buy an African Grey parrot!

a nice change of pace book

Published by Thriftbooks.com User , 17 years ago
A great story for anyone who loves animals and nature or just needs a good laugh. Here I thought I was the only one enslaved by my pets.I couldn't put this book down and hope Bob and Linda will write further adventures of their feather and fur kids. Check out their website for pics of the gang.

A book that is laugh out loud funny...

Published by Thriftbooks.com User , 17 years ago
?Enslaved by Ducks? is extremely funny. Funny books are a rarity. Bob Tarte joins the ranks of Bill Bryson and Ian Frazier as one of the very few writers who can elicit belly laughs not bookish titters. What sets ?Enslaved by Ducks? apart from other humorous works is that it does not rely on an unusual setting, celebrity, or wacky characters. Bob Tarte focuses on how truly hilarious the mundane can be. ?Enslaved by Ducks? is no mere mawkish animal book but an odyssey of a man whose enjoyment of life grows from talking to Muffin the Dog through a vacuum cleaner hose to accommodating a menagerie of creatures from many genus including hominids. It is an exquisite piece of writing.
Copyright © 2020 Thriftbooks.com Terms of Use | Privacy Policy | Do Not Sell My Personal Information | Accessibility Statement
ThriftBooks® and the ThriftBooks® logo are registered trademarks of Thrift Books Global, LLC