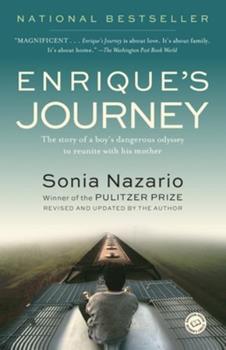 Enrique's Journey : The Story of a Boy's Dangerous Odyssey to reunite with His Mother

An astonishing story that puts a human face on the ongoing debate about immigration reform in the United States, now updated with a new Epilogue and Afterword, photos of Enrique and his family, an author interview, and more--the definitive edition of a classic of contemporary America Based on the Los Angeles Times newspaper series that won two Pulitzer Prizes, one for feature writing and another for feature photography, this page-turner about the...

Published by Thriftbooks.com User , 14 years ago
I recommend Ms. Nazario's book both as a balanced analysis of the problems associated with illegal immigration to the U.S. and as a very approachable read for students of the Spanish language. I can't comment on the quality of the translation since I haven't read the English-language original. However, the Spanish is straight-forward, and the narrative is almost entirely in the present tense. I felt that the book helped expand my Spanish vocabulary, and I would think that it would make a relevant and very useful text for teachers of intermediate Spanish in the U.S. Ms. Nazario attempts to humanize the illegal immigrants that we hear about every day in the news. She focuses on immigrants from Central America whose journey to the U.S. is often a harrowing one. She describes that journey in great detail. More interesting still (to me) was her account of the family problems and conflicts that arise when a mother leaves her children in search of better pay abroad. While the mother believes that the money she sends home will improve the lives of the children she left behind, the children themselves often feel abandoned, unloved, and resentful. I had expected that Ms. Nazario would exploit the emotions aroused in the reader -- our sympathy for the hardships experienced by these immigrants -- and argue that their suffering entitles them to residence in the U.S. (despite their illegal entry.) To my surprise, she concludes that illegal immigration serves neither their interests in all cases nor those of U.S. workers (particularly the unskilled) and U.S. taxpayers. A realistic analysis. She recommends that the U.S. do what it can to help improve economic conditions in the countries from which these immigrants come. I've put my money where my mouth is and sent copies of this book to my mother and sisters, who all live in areas of the U.S. affected by illegal immigration.

Best non-fiction book of the year

Published by Thriftbooks.com User , 15 years ago
I read this story when it was in the LA Times and couldn't wait for the book. I read the story cover to cover in a weekend and thought it was the best non-fiction work I have read in years. Obviously, Ms. Nazario's story shows that our immigration problem isn't as simple as it seems. I was very moved by this story and urge everyone to read it.

Published by Thriftbooks.com User , 15 years ago
Nazario's LA Times stories on Enrique's journey have been hugely successful with undergraduates in my Latin American History courses. Enrique's journey (as told by Nazario) is a gripping, intimate account that reveals the many structural and personal factors that motivate the desperate northward migration of Central American children every year. Like the now-abundant testimonial literature that we profs use to bring Latin American experiences into the classroom, Nazario's text has both troubled and inspired my students. Unike many testimonials, however, Nazario's account skillfully weaves context (and nuance) into the extensive interview materials. One finds here the results of her exhaustive research into US, Central American, and Mexican migration policies and practices; the work of NGO and government agencies with migrant children; the transnational labor market in female domestic service that leaves Central American children in the care of family members; and the train-top world of migrants, gangs, and police in relation to the communities they pass through from Honduras to northern Mexico. After a long semester of powerful but often distant historical study, Nazario's account brings home (literally, across the border) many pressing issues in contemporary US-Latin American relations. I highly recommend this work, both for classroom and personal use.
Copyright © 2020 Thriftbooks.com Terms of Use | Privacy Policy | Do Not Sell My Personal Information | Accessibility Statement
ThriftBooks® and the ThriftBooks® logo are registered trademarks of Thrift Books Global, LLC