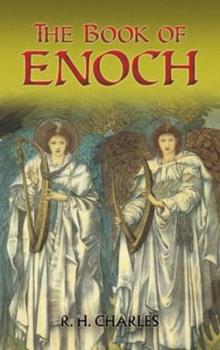 The Book of Enoch

R. H. Charles provides a definitive translation of one of the most noted apocalyptic works still in existence. Often described as the lost book of the Bible, The Book of Enoch seems to have been written in Palestine by several different authors in the first and second centuries B.C. For hundreds of years it was accepted by the early church fathers, but it was rejected by the council of Laodicea in A.D. 364. Today, it remains a written remnant of the...

Published by Thriftbooks.com User , 13 years ago
This may be the greatest book I have ever read about the judgment and the leadership in these last days to get us safely to the other side in these last days. It lets one see as the earth fell there was a civilization that did not fall and that this civilization would be here to help us as mankind and the earth takes the next step towards ascention. It gives detailed information on those that corrupted mankind in its inocence and how this was done. It lets us know that there will be leadership set up in the next world. Maybe one of the best things about this book is it is not written to any one type of people, it is written equally to all mankind. It covers the pre-existance in ancient times of the leadership in the next world. It explains plainly some of the metaphores used in this book and the Bible. There is good detail on the punishments and rewards of the judgment. It may be suprising to some to learn how (or who) will decide some of these judgments. It explains how evil survived the flood.

Published by Thriftbooks.com User , 14 years ago
This Book of Enoch needs to be in the hands of every serious Bible student as an indispensable aid in understanding the New Testament regarding the evolution of theology between 200 BC and 100 AD, and also the Old Testament concerning problem prophetical passages. The book was written by a number of Jewish writers around the second century BC, and was considered inspired Scripture in the century before Christ and up to the third century AD by such early Church Fathers, as Justin Martyr, Origen, Clement of Alexandria, and Tertullian. It was eventually removed from the canon of Scripture in the fourth century and was virtually lost to Western Christendom until the early 1800s AD, when Laurence published the first English translation based upon a single Ethiopic manuscript. There are several other popular versions in print today, but the only translation worthy of serious study is the R.H. Charles edition, published in the early 1900s after twenty years of extensive research. His translation is based upon 23 Ethiopic manuscripts and all available source fragments of the time. Compared to other translations, the Charles version is quite exhaustive in the number of pages (nearly twice as many as other editions). He, alone, offers an extensive, in-depth Introduction of over 100 pages, and a comprehensive analysis and criticism of the text, plus accurate verse numbering. This is definitely the version to purchase without question! Two other important ancient books readers might want to consider are The Book of Jasher Referred to in Joshua and II Samuel (1840 edition), and The Book of Jubilees translated from the Ethiopic by Schodde, offered by Artisan Publishers.

Published by Thriftbooks.com User , 18 years ago
This pseudepigraphon of the Old testament was rejected for what seems obscure reasons, like most of the time with apocrypha, and yet this book is probably essential. It shows that God's creation was far from being perfect, which we knew of course. But it also gives the episode in which some angels known as the Watchers because they were supposed to be watching the human race, got fascinated by the beautiful women on earth. But these angels were not pure spirits and they were sexually very well provided (« the great stars whose privy members were like those of horses » 88:3) and males. Hence they descended from their heights and took some women and procreated a new race of beings with them, the famous giants who destroyed the earth. And the book contains two versions of the tale, the first one with women procreating giants, and the second one with cows, this time procreating elephants, camels and asses. This is a perfect parable for those scientists and technicians who invent anything and menace the life of the planet and of humanity with the implementation of their inventions. This will bring about God's decision to send the deluge and wipe life out completely or nearly. To clean up the damage god causes even greater damage : the radical, though not quite final, solution. But this book is also essential because there is a complete vision of the other worlds, paradise and all the hells that were being prepared for the coming apocalypse and that were surrounding the human world. The descriptions are very vivid and the trip in these climes reminds us of Dante's Divine Comedy. And that is not all. The book contains a strong section about astronomy, summarizing all human knowledge at the time about the sun and the moon, not so much about the stars, except the twelve sun portals that will give the twelve zodiacal signs. It also contains a strong prediction in the shape of wisdom chapters and verses and in the shape of dream visions that the rich and the powerful will be destroyed, even if God has to stir some trouble down on earth among their victims or subjects to have them removed from power. Finally it also predicts there will be a final day of judgment when the Elect One will perform divine justice in the name of the God of the Spirits. This is very similar to the Book of Revelation. In other words it is an important source and model for that Book of Revelation. Finally it reveals very clearly that Noah is an albino, the fear his birth caused among his relatives, first of all his father, and how Enoch saved him from destruction, which was normal in those days for off-standard children, with the argument that he had a divine mission to fulfill and that he, Enoch, knew about it because it had been revealed to him in his visions and his communication with God. This book is thus both tremendously human by the desire to get a compensation for the oppression of the majority of the people by a few rich and powerful persons or the fear an albino baby can c

Published by Thriftbooks.com User , 22 years ago
this version of the book of Enoch is very indepth,easy to read.Enoch is a very odd character Genesis states that he walked with god. What did it mean The book gives us the back story to what happened than.The story of lust,betrayal,greed,and hate.Sex hungry angels who try to take over the Earth with there demonic offspring.The book of Enoch comes from a better source than even the gospels,texts left alone for almost a thousand years.There were no rewrites,no editorial changes by people saying"Well this is what they meant!"A pure source of history found with the dead sea scrolls, and in Ethiopic temples.Even if you don't believe it at all,the story is excellent!
Trustpilot
Copyright © 2022 Thriftbooks.com Terms of Use | Privacy Policy | Do Not Sell My Personal Information | Cookie Preferences | Accessibility Statement
ThriftBooks® and the ThriftBooks® logo are registered trademarks of Thrift Books Global, LLC