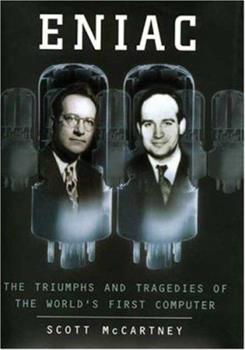 Eniac: The Triumphs and Tragedies of the World's First Computer

Based on original interviews with surviving participants and the first study of John Mauchly and Presper Eckert's personal papers, "ENIAC" tells the story of the three-year race to complete the world's first computer--and of the three-decade struggle to take credit for it. 10 illustrations.

Author got it right

Published by Thriftbooks.com User , 22 years ago
In the late 1980s I edited a feature magazine on the history of computing for Computerworld newspaper, and we concluded as the author of ENIAC does--that Eckert and Mauchly deserve credit as developing the first computer--with the same qualifications that the author states. Other earlier efforts, such as by Atanasoff, were important for advancing the understanding of the field, but they didn't lead to a standalone programmable electronic calculator that can be seen as the forerunner of today's machines. After Eckert and Mauchly, the field blossomed, and this book tells their story well.

Published by Thriftbooks.com User , 22 years ago
Anybody who has taken an introductory computer science course has heard about how Mauchly and Eckert built ENIAC, the first electronic computer, which was originally intended to compute artillery shell trajectories during World War II. Here is the amazing story of the building of ENIAC, and how Mauchly and Eckert deserve far more credit for this triumph than the customary footnote they are usually given in computer science textbooks. After all, it was they who actually turned theory into real electrical wiring and vacuum tubes. This book questions whether John von Neumann deserves as much credit as he is sometimes given for being the "Father of the Modern Computer."

Published by Thriftbooks.com User , 23 years ago
The problem with most books on technology is that they tend to dwell on facts, figures, and data that lose average readers competely. ENIAC is not that type of book. Because he is an accomplished writer, well able to weave human emotion into the tale, Scott McCartney relates a story that anyone--whether technically proficient or not--can appreciate. The only other book that can come close is Tracy Kidder's Pulitzer Prize-winning "The Soul of a New Machine."Those who argue technical details are missing the point. McCartney does understand the complexities of computer design, but he is making the information accessible to those of us who don't have advanced degrees in computer science. ENIAC is a not a textbook; it's targeted for the masses. And McCartney does a great job of making the nearly incomprehensible facts seem, if fleetingly, logical to the vast sea of laymen out here.For the contentious person who said that journalists shouldn't write books like this, I counter with this: Would you rather read a human drama written by a scientist or by a professional writer? I ask this with complete respect given for the capabilities of scientists (my husband is a PhD in computer science). Scientists specialize in research and development; writers specialize in making words come alive. And that's what McCartney does; he makes the story robust and engaging.If this book accomplishes anything, it will set the record straight about the accomplishments of Mauchly and Eckert, two men who were pushed aside by big egos and big money. Even if acclaim comes too late, it is still honor given for honor due.

Finally the true story is debunked!

Published by Thriftbooks.com User , 23 years ago
Strong feelings and misinformation are common on this topic, as you can see by reading some of these "reviews." That is why this book is important, for it gives a popular account of the true side of a story that has been clouded by an earlier popular account by Mollenhoff in which Atanasoff is elevated to "Forgotten Father of the Computer." I don't want to berate the previous reviewer from Iowa too much, but I have a feeling that haven't read McCartney's book. The Iowa cheerleaders have been spouting this stuff for years, while the great majority of computer historians have already accepted the fact that, in spite of one judge's legal ruling on a patent, Eckert and Mauchly did invent the first electronic computer. Never-the-less, you'll continue to hear people parroting some outright lies due to an effective PR campaign by the proponents of Iowa State. (For example, the terms "general-purpose" and "programmable" can never apply to Atanasoff's machine, which was designed solely for the purpose of solving simultaneous equations.) So anyway, the book is about this controversy. So rather than me supporting it's arguments, I recommend you read it! It's a compelling story, with complex characters, not just good guys and bad guys. I believe that the perspective is accurate and true, for it agrees with the serious academic historians. Despite a few unruly naysayers from Iowa.
Trustpilot
Copyright © 2022 Thriftbooks.com Terms of Use | Privacy Policy | Do Not Sell or Share My Personal Information | Accessibility Statement
ThriftBooks® and the ThriftBooks® logo are registered trademarks of Thrift Books Global, LLC