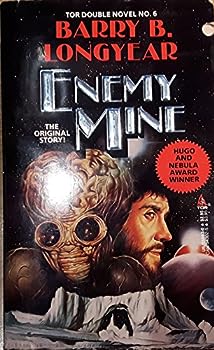 Enemy Mine / Another Orphan (Tor Double Novel, No 6)

(Book #6 in the Tor Doubles Series)

by Barry B. Longyear and John Kessel

Enemy Mine (the Author's Cut). Novella. Expanded version of the award winning story "Enemy Mine" that inspired the 20th Century Fox motion picture starring Dennis Quaid and Lou Gossett, Jr. The story... This description may be from another edition of this product.

Published by Thriftbooks.com User , 13 years ago
This is quite simply one of the best books I've ever read. I believe it was originally published in a magazine as a novella and then reprinted in book form to make money. It is rather short, but every page is worth five in a typical novel. The story is deceptively simple: a human and an alien crashland on an ocean world and most work together to survive. The story has been done before, but never so well as this. The beginning is solid suspense while the middle is a tear jerker. The final third is less intense and moves to more of a cerebral level. It is a fitting conclusion, though not as intense as the first two parts. All in all, Enemy Mine deserves its many accolades. By the way, read the book before you see the movie--the acting is good but they changed too many things for a fan to be satisfied.

accross the sea of xenophobia

Published by Thriftbooks.com User , 13 years ago
[...] The second short story is about a displaced man who finds himself in the novel Moby Dick come to life around him. Both are award winning stories, but "Enemy Mine" in the original form is the prize here:that which is taught here in is worthy.

One of the best SF Books EVER!

Published by Thriftbooks.com User , 15 years ago
I'm a huge fan of "Enemy Mine," and have read every version Longyear has published and every Longyear collection it has been in... "Manifest Destiny" and "The Enemy Papers," to be precise. This is one of the greatest stories of breaking racial barriers and living in peace with people of different cultures ever written. It is just as timely now as ever. I am hoping that the full length novel version of Enemy Mine that Longyear and David Gerrold (author of "The Man Who Folded Himself" and Star Trek's "Trouble With Tribbles") will be reprinted soon. Longyear is bringing back all of his other books, why not that one? Does the movie studio own the rights? I'm sure Gerrold would like to see it reprinted. It fleshed out the story more, developed the relationship between Shigan and Davidge, and added more Zammis material. The ending was almost the same as the short story only it was expanded and improved. The only version out there is the one with the movie tie-in cover, which is long out-of-print.

Published by Thriftbooks.com User , 17 years ago
It is wonderful to be able to read the original Enemy MIne. The book is far superior to the movie.
Copyright © 2022 Thriftbooks.com Terms of Use | Privacy Policy | Do Not Sell My Personal Information | Accessibility Statement
ThriftBooks® and the ThriftBooks® logo are registered trademarks of Thrift Books Global, LLC