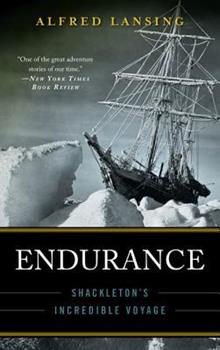 The astonishing saga of polar explorer Ernest Shackleton's survival for over a year on the ice-bound Antarctic seas, as Time magazine put it, "defined heroism." Alfred Lansing's scrupulously researched and brilliantly narrated book -- with over 200,000 copies sold -- has long been acknowledged as the definitive account of the Endurance's fateful trip. To write their authoritative story, Lansing consulted with ten of the surviving members and gained...

Published by SkaBamm , 11 months ago
Years after reading this book, I remember in such explicit detail the harrowing real-life adventure-turned-fight for survival. I don't normally gravitate towards stories like this but something told me to check it out of my local library 5 years ago. The author did extensive research & is an amazing storyteller. He did an incredible job of engaging the Survivor within, and I will never forget what these men endured.

One of the few books I've encountered that was hard to put down.

Published by HT , 1 year ago
From start to finish this is was an awesome book. The true days of "new continental exploration" are all but in our past but in reading this book one could ( from the comfort of their choosing) struggle along with the members of the Great Imperial Trans-Antarctic Expedition. Almost as soon as Shackleton announced his plans for an expedition his uphill climb began. This book teaches as much about patience and leadership as it does sacrifice and obedience. Endurance ( the name of the ship ) is possibly the best word chosen to sum up the spirit of every man aboard, regardless what the arctic threw at them. If you are intrigued by exploration, the turn of the 20th century, or stories of survival I can almost guarantee, you will appreciate this book. Lastly the afterword by DR. James Dobson was well done and encapsulates the very feeling many struggle with.

Published by Sam , 2 years ago
This is one of my favorite stories ever now, shows how powerful the will to survive is.

Nothing is so bad that it can't get worse

Published by Thriftbooks.com User , 20 years ago
This book is one of the few exceptional -absolutely execptional- tales of survival and it proves the maxim that nothing is so bad that it can't get worse. But also it proves that you can know the end of a story - it is a well known fact that Shackleton brought all his men through this arduous trial and all survived - and it doesn't spoil the story at all. Truth is not only stranger than fiction, but it is a good deal harder. The bare-bones of the story are that Shackleton and his team left civillisation in 1914 in the Endurance to travel to attempt to reach the South Pole - a trip he had tried and failed by only a couple of hundred miles or so to achive in 1908. Amundsen had already reached the pole first but for Shackleton it was unfinished business. The Endurance had been built to push through the pack ice, but conditions proved too much and it was trapped in pack ice. Summer wore on and there was no escape - the winds were in the wrong direction - then winter hit and they were trapped in their boat. They settled in to a routine until the ice went against them and cracked the Endurance. Shackleton realised the only way out was on their own, so they abandoned the boat and made for the pack ice at first dragging the boats, then relying a floe to carry them north where they might find more supplies, or be rescued. In the end they had to rescue themselves and this is the story of their indomitable courage and strength to survive under incredibly harsh conditions and in grave discomfort. We are talking about camping out in antartica - in less than adequate shelter, with essentially starvation rations, no heating, barely adequate clothing. Lansing tells this story in a sparing style and it really works. He has had access to (I think) all the diaries available from men who kept them on the trip and they are very revealing of both personalities and foibles of the various characters who made up the trip - and these aren't all a bunch of saintly characters pulling together for the sake of their team and mutual survival - they fight, some are occassionally selfish, they love their dogs but have almost no compunction of putting them down when they have to - and they are very real and human. Lansing also brings to light some of the things you wouldn't think about it - the incredible boredom that they all felt, that they were generally alternatvely wracked by either gripping hunger or desparate need for survival and how to escape - the one emotion replacing the other depending on conditions. He also explains some of the things you wouldn't even think to ask - how they went to the toilet for instance, the conditions inside the huts and the tents and so on. It brings a very vivd picture of life as it must have been for the group.And really, nothing isn't so bad that it can't get worse. Each time you think that Shackleton is about to win there is a small disaster, or the elements go against them - they are constantly battling for their lives with decreasing od

Published by Thriftbooks.com User , 22 years ago
Whew!! That's the first word that comes to my mind. It surfaced in my thoughts numerous times as I was reading this tale. This book is overwhelming. I had always heard tales about Shackleton and this was a most compelling read. I found myself unable to put it down. It just grabs a hold of you and won't let go. Alfred Lansing did a superb job of storytelling here. It is one of the most amazing tales of human courage and endurance ever written. This is a fabulous story. Sir Ernest Shackleton truly displayed extraordinary mettle in spite failing to achieve the initial objective. His leadership is undeniable. He held a crew together to endure the harshest climate on the planet. That the entire crew survived the venture is testament to the power of the human spirit. The will to survive can attain soaring heights as this tale suggests. Lansing attempts to get into the nature of the different men but he allows their diaries to dictate the writing. This is great because supposition by authors of nonfiction can be fatuous. Drawing excerpts from the diaries of the men is a way to draw upon the incredible human drama and psychology that must have unfolded in this venture. The obstacles encountered by the crew are staggering. The wind, the dampness, the bitter cold and the long months of darkness in the winter seem like more than any man should be able to stand. They slept in wet sleeping bags in sub-freezing temperature; ate unappetizing foods; and still managed to keep their hopes alive. These were not accommodations up to Hyatt standards. One wonders how many people today would be tough enough to triumph over these hardships. The pain, ennui and discomfort must have been staggering. I found myself just shaking my head with awe at numerous passages in the book. These are men who went to Hell and came back alive. That is remarkable in and of itself. This book is a classic account of one of man's most remarkable journeys. Read it and discover for yourself.

An Antidote for the Age of Whining and Self-Absorption

Published by Thriftbooks.com User , 22 years ago
Everything that defines courage and leadership for our age and any other is within the 280 pages of this wonderful book. For nearly two years, in conditions of constant zero and below cold, freezing wet, and often hunger, Ernest Shackleton kept all 27 men who sailed with him on the Endurance alive to eventually return to the England they left on the verge of World War I. That single-minded devotion to his men should make this book required reading for every would-be politician and corporate executive before he dares ask for the faith, trust and respect of those he would lead. Lansing dedicated the book "In appreciation for whatever it is that makes men accomplish the impossible." He wisely and without flourish often lets the men's own words -- through the journals that many of them kept at the time and in interviews forty years later -- tell their extraordinary story, each stage of which reads more harrowing than the last. On an expedition that would have attempted to cross the Antarctic on foot (a feat not accomplished until four decades later), the Endurance is trapped in pack ice before it can reach shore. Shackleton's perhaps foolhardy original goal thus turns to keeping his men alive until they can be rescued. After ten months locked in the drifting pack, the Endurance is crushed and the men forced to abandon her for an ice floe, then several weeks later a smaller floe still. Eventually they take to three boats to reach forlorn Elephant Island from which Shackleton takes a skeleton crew of five and in a 22 foot open boat navigates the enormous seas of Drake's Passage to South Ascension Island. Once there he only (only!) has uncharted glaciers to cross to reach the whaling station on the other side of the island from which rescue of the Elephant Island castaways is eventually launched. The only other crossing of South Georgian Island by foot at the time Lansing wrote in 1959 occurred on a "easier" route with equipment and time. Shackleton had neither, only a fifty foot piece of rope, a carpenter's adze, and the knowledge that to stop moving was to invite death by freezing. At journey's end, to the astonished manager of the whaling factory, he says simply, "My name is Shackleton." I would have liked to have known him and all his men.

Published by Thriftbooks.com User , 22 years ago
This is an absolutely amazing and true accounting of the 1914 Antarctic expedition gone to hell. It is clear that the author did an incredible amount of research, and though this book doesn't read like a novel, its presentation is much more powerful this way, giving a panoramic view of the whole terrible and desperate situation of these men.I don't have any experience even comparable to what these men went through, the closest I've ever come is rowing down the coast of Maine in the summer in a 30 foot pulling boat, and I'll tell you, this guy gets every detail.Anyway, an absolutely incredible look at human endurance, at what a person will go through if he must. I definitely recommend this book to everyone. One note...make sure the version you buy or get at the library has expedition photographer Hurley's photographs in it. Some paperback editions don't, and you're really missing part of the experience without them.