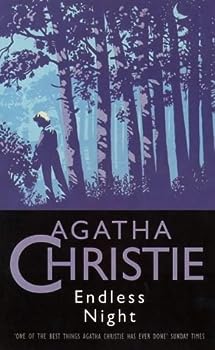 One of Agatha Christie's personal favorites, Endless Night is a critically acclaimed classic crime thriller from the beloved queen of mystery.When penniless Michael Rogers discovers the beautiful... This description may be from another edition of this product.

Published by Thriftbooks.com User , 14 years ago
What "improvements" have been made for the Signet edition? There are already major differences in punctuation, word choices, and scene breaks between the original Collins and Dodd Mead editions of this novel. There are further differences between the Dodd Mead editions republished by Random House/Avenel and the Dodd Mead editions republished by Simon & Shuster/Pocket. There are further additions still in the Bantam, Berkley, and Black Dog & Leventhal editions. For every publishing house putting out her works, there seem to be a new batch of editors altering Agatha Christie's words and the sound of her voice. What's the matter with these publishers? Whose voice do they think we want to hear when we sit down to a novel by Agatha Christie? And what will she sound like twenty years from now? It's frightening that her estate has failed to see the importance of guarding her words as she wrote them. Please tell me I'm not the only one here who senses that a crime has been committed.

Published by Thriftbooks.com User , 18 years ago
Once again, "The Queen of Crime" pleased me with another thrilling mystery. Even more delightful, this book follows a similar pattern to "Three Blind Mice and Other Stories" and "Hickory Dickory Dock." When Agatha Christie sets out to write a story with a nursery rhyme pattern it is truly suspenseful and intriguing. This installmen in Christie's large collection has Miss Marple, my favorite of her detectives, trying to solve the mystery of the poisoning of financier Rex Fortescue with taxeine. This case hits close to home for Miss Marple since Gladys Martin, a domestic maid whom she had trained for service becomes a victim of the killer. The culprit is following a bizarre pattern of using the "Sing a Song of Sixpence" nursery rhyme, and thus three victims are discovered. Rex Fortescue is discovered upon death to have a coat pocket full of rye grain, his young wife, Adelle Fortescue is discovered dead over a meal of scones and honey, and Gladys is discovered strangled with a clothespin on her nose, (A cruel imitation of "The little blackbird who nipped off the maids nose.") Miss Marple uses the nursery rhyme to discover the guilty person, and the motive is both enraging and poignant. Since there is a lemited amount of suspects, Christie superbly develops the characters and purposefully misleads the reader with plenty of red herrings. The characters in this particular installment are not as likable as in previous books of the series, but they each have complex personalities. Perhaps my favorite character is Jennifer Fortescue, whom I can relate too in a way. Of course, Miss Marple is unforgettable, and I cannot help but wish that Christie would have put more of her in to the book. Inspector Neal is fine, but Craddock is my personal favorite police officer in Christie's Miss Marple series. However, this book is terrific, and should be read by all mystery fans as a cozy whodunit that is both poignant and mostly fun. Happy reading to you all.

Definitely NOT a typical Christie...

Published by Thriftbooks.com User , 18 years ago
but wonderful in its own way. This is one of Christie's 'non-series' books - no Poirot, Miss Marple, Tommy and Tuppence etc. Also it is MUCH darker and more serious than her usual work, this is not one to give a 'younger or more sensitive reader'. It is, however, an example of just how talented an author Christie was, capable of much more than clever, formulistic detective stories.This moody, 1967 novel is told by Mike Rogers, a young man who drifted from job to job looking for something, he wasn't sure of just what. He found his passion in a place, Gipsy Acre, a piece of ground that he wanted to buy and build a marvelous house on, a house designed by a famous architect he had met. The problem was that Mike had no money, and very little chance of ever getting the kind of money he would need for this dream. By chance he met a beautiful young woman who happened to be fabulously wealthy. They fell in love, married and.......well, read the book.Again, this is definitely not a 'cozy' mystery, it is dark, disturbing and scary. It is one of those books that will stay with you and haunt you for years to come. As with all Christies the clues are all there for you to follow, you may or may not guess the killer and there is definitely a Christie twist at the finish.

Not many suspects, but buckets full of red herrings.

Published by Thriftbooks.com User , 21 years ago
Almost every formula, idea, and trick that Agatha Christie used in her detective fiction works proved to be entirely successful and won her an enormous reading public. Making use of nursery rhymes was one such formula. Nursery rhymes can reawaken the sense of wonder, mystery and enchantment in any reader. They also can carry symbolic levels of meaning, and some are allegories. In this her 1953 offering she makes use of the nursery rhyme "Sing A Song Of Sixpence". Appropriately it is one of her Miss Marple books. Although her elderly spinster sleuth has little to do here, and is late making her appearance, it is she who perceives and urges the significance of the nursery rhyme. "Don't you see, it makes a pattern to all this." The murders occur in the disfunctional family of Rex Fortescue, a financier, and the action occurs in his London office and in the family home, Yew Tree Lodge. The opening chapters are wonderfully engaging. Agatha Christie, when she took the trouble, could sketch characters vividly. Amongst all of them in this book, there are not more than a handful of suspects. To compensate, Mrs Christie throws in buckets full of red herrings.You'll enjoy the puzzle, and having innumerable theories suggested and dismissed. The solution, when it comes, however, is no more plausible than is the likelihood of a blackbird pecking off a maid's nose. If you can obtain the unabridged reading of the book by Rosemary Leach, your enjoyment will be enhanced. Rosemary Leach is unusually skilled at "doing" the voices of a large cast of characters, male and female.

Endless Night Mentions in Our Blog