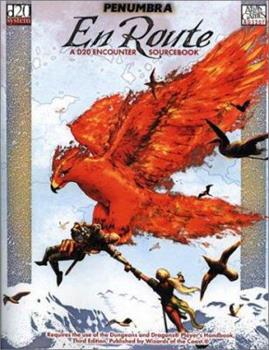 This description may be from another edition of this product. An Encounter Sourcebook for the D20 System Edited by Michelle A. Brown Nephew You've scoured the dungeon, looted the dragon's horde, and lived to tell the tale of your brave deeds. Now it's time to...

Published by Thriftbooks.com User , 13 years ago
Preventing an overland journey from deteriorating into a tedious succession of random encounters has always been a struggle for me as a DM. Therefore, when the player characters found themselves over 300 miles from the next plot point in the main storyline, I was keen to try out some of Penumbra's mini-adventures: Dancin' The Night Away "A travelling party is charmed into serving at a pixie's dance and must escape." - very harsh: all of the DC 20+ Will saves are not something that I would want to inflict on my players very often. If you take away their ability to act, then you reduce them to a passive audience. They are sure to find this trying on their patience. - However, it is in keeping with the reputation of the fey as enchanters and illusionists. Gwydd and his band of cheeky tricksters are only after a bit of fun at the adventurers' expense, but their ploy stands a significant risk of backfiring. - The player who heard Amadan's warning should have known better, but he fell for it hook, line and sinker. Fortunately he had the diplomacy skills to patch things up once he had realized his mistake, but not before half the party had succumbed to sleep arrows. - keep in mind that, according to the Monster Manual, the pixies' sleep and memory loss arrows do not do any damage (contrary to what is stated in the text of the adventure). Dead Drunk "While visiting an inn, the party runs afoul of a drunken poltergeist that possesses one of the players." - a great scenario to use when one of your players skips a game (as an NPC, his drunken antics are more inexplicable) - the player in question is still wondering what his character got up to in his absence - it has become something of an in-joke amongst the others. The Fox's Fraud "A small party meets a waylaid traveller alongside the road, who is really the leader of a bandit troupe that uses subterfuge to mask its small size." - my players were not intimidated at all by the ruse, and attacked the bandits immediately. You will need to put in a lot of effort to sell this scenario convincingly. - dependent upon Spot and Listen checks for the adventuring party to know that they appear outnumbered. Many of the characters were oblivious to the fact, and acted accordingly. Goblin Trippin' "Although goblins and men rarely coexist peacefully, one particular band of goblins has more than a malicious gleam of hatred in its eyes. What has stoked these wicked creatures' fury so greatly?" - by interrogating the Goblins, they discovered that a nearby village's grain supply had been infested with ergot - a good encounter for the druid (or any herbalist) to shine, while also providing an opportunity for heroism in warning the village The Hellcow "After a strange encounter with an old man and a cow, the party has to deal with a troublesome spirit that possesses animals." - the heroic ranger who rode forth to assist the farmer was suitably perturbed when the old man clutched his chest and fell to the ground - there w

Help out the DM and trash the standard encounters

Published by Thriftbooks.com User , 18 years ago
I am not a huge fan pre-boxed adventures. Still I can recomand any DM to pay the price for this fantastic book.In short, this book contains 21 ready to play adventures that will take only a short while... say between half an hour and a couple of hours. But they will be memorable adventures, that can realy spice up the long hours on the road or fill time between two adventures. These adventures will stand out in the memory's of your players way more then the average "You are out on this path and two muggers jump up to you" ....The adventures are balanced and need very little preparation time. Read thru the pages and you can run it basicaly. The artwork is in black-and-white and not always realy top notch, but the quality of the adventures clearly sets a high standard.Best of all, most adventures either require a "non-combat" approach or have a "non-combat" solution.Personaly I love the encounter that features a great golden oak with rubby applesize nuts in it. However, beware of the gnome in that giant oak tree.

More than just a series of encounters

Published by Thriftbooks.com User , 19 years ago
En Route is a sourcebook that provides a great variety of short adventures for a role playing campaign. The quality of the writing and the originality of the scenarios are both praiseworthy, but best of all is the fact that most of the adventures can be solved with only a minimum of armed conflict. That is not to say that the adventures are not challenging--quite the opposite. Rather, players will have to adapt to a variety of situations calling for diplomacy, cunning, or a sense of humor to overcome the obstacles described here. I think my favorite adventure is "The Hellcow," in which the PCs are set against...a perfectly ordinary cow. A riot!
Copyright © 2020 Thriftbooks.com Terms of Use | Privacy Policy | Do Not Sell My Personal Information | Accessibility Statement
ThriftBooks® and the ThriftBooks® logo are registered trademarks of Thrift Books Global, LLC