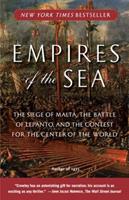 Empires of the Sea: The Siege of Malta, the Battle of Lepanto, and the Contest for the Center of the World

In 1521, Suleiman the Magnificent, Muslim ruler of the Ottoman Empire, dispatched an invasion fleet to the Christian island of Rhodes. This would prove to be the opening shot in an epic clash between rival empires and faiths for control of the Mediterranean and the center of the world. In Empires of the Sea, acclaimed historian Roger Crowley has written a thrilling account of this brutal decades-long battle between Christendom and Islam for the soul...

Published by Thriftbooks.com User , 12 years ago
Roger Crowley, author of the excellent 1453: The Holy War for Constantinople and the Clash of Islam and the West, continues his history of the clash between Islam and Christianity after the Middle Ages in Empires of the Sea: The Siege of Malta, the Battle of Lepanto, and the Contest for the Center of the World. While some Americans know that Europe thwarted the Ottoman land invasion at Vienna, few realize that the Ottoman threat hung over the Mediterranean Sea for much of the 16th century. Crowley deftly covers several of the major sea battles between the Ottoman Empire and Hapsburg Spain, including the siege of Malta and battle of Lepanto. Crowley has a gift for writing historical narrative. His writing is extremely readable and fluid. History comes alive with several personalities, including Barbarossa the Muslim corsair/pirate who brought terror to coastal Europe; the stern La Valette, Knight of St. John, who raised the drawbridge at Malta to ensure that the fortress defenders would not retreat; and Don Juan, the dashing Spanish prince who pushed his unwilling fleet towards battle at Lepanto.The focus of Empires of the Sea is, of course, the battles, and these are narrated with gripping detail. Crowley lets readers really feel like they are on the galleys, from the way the arrows stuck out of the deck to the noise of the cannons. My only complaint about Empires of the Sea is that it doesn't provide much background about the Ottoman or Hapsburg Empires. I understand Crowley had to limit that background information he provides in order to focus on the narrative and battles. Still, I suspect many readers will know next to nothing about these empires, which might make them reluctant to invest in the narrative. Fortunately, I did remember quite a bit from my university history courses, but still I felt I could use a brief refresher on key events like the Battle of Vienna, which Crowley barely mentions but defined Ottoman-European relations during the 16th century. I guess my point isn't so much a criticism of Crowley's book as much as it is a suggestion that readers at least browse an article about the history of the Ottomans and Hapsburgs before taking on this book. Overall, if you generally don't like to read books about European history, Roger Crowley's books might change your mind. If you do like history, then Empires of the Sea will be as exciting and enjoyable as watching the space battles in Star Wars.

Outstanding telling of the great conflict in the Mediterranean

Published by Thriftbooks.com User , 14 years ago
Mr Crowley has captured the brutal and grim conflict that spanned from 1521 to the fateful fight at Lapanto in 1571. The clash between the forces of Islam and the combined units of Italy, Spain and others is detailed in a most readable fashion, touching on key events like the battle of Cyprus, Famajusta and Malta. The incredible siege at Malta in 1565 is without a doubt one of the greatest stories of a 'last stand'. I would recommend Ernie Bradford's terrific book 'The Great Siege' for more insight into this important battle against enormous odds, but this book covers much about Malta in a handful of chapters. Some powerful characters and their lives are explained in this fine book and it is rich in detail, historical information and some rather gruesome tortures and scenes of combat. Excellent data that leds one to search out other books on this vast and often bloody period in history.

Published by Thriftbooks.com User , 14 years ago
Empires of the Sea: The Siege of Malta, the Battle of Lepanto, and the Contest for the Center of the World by Roger Crowley provides the reader with a clear picture into the world of the 16th century Mediterranean and more importantly into warfare for the time. Crowley wastes no time with preliminaries but gets quickly to work in the first chapter with Suleiman's attack on Rhodes. There's no beating around the bush here. Crowley does a terrific job looking at the art of war and how the two sides differed in their respective approaches to battle. On the one hand, the Knights of Saint John, who, like the Templar's, was an international organization with members pulled from the major European countries and provinces of the time. On the other was the Turkish army of Suleiman, large, mobile, well equipped and quick to mount an offensive; apparently lacking nothing needed for conquest. That the Christians were out-numbered is made clear. To the defenders of Malta the loss of any knight was a loss that was difficult if not impossible to replace. Suleiman had numbers on his side and spent freely suffering huge casualties for the time of both his soldiers and slaves. It was all out warfare. Rhodes was strategically important, in part, due to the loss of Constantinople in 1453. However, the loss of Rhodes could not compare to the loss of Malta fifty years later. Without Malta, Italy would become the "front lines" in the battle between Christendom and the door to Europe would be open. Crowley also does a masterful job by incorporating primary sources where possible. Descriptions by eyewitnesses are scattered throughout the text and add an important element to the book. Also the Turkish side of things is presented pretty clearly as illustrated with the following: "Selim, Ottoman Sultan, Emperor of the Turks, Lord of Lords, King of Kings , Shadow of God, Lord of the Earthly Paradise and of Jerusalem, to the Signory of Venice: We demand of you Cyprus, which you shall give Us willingly or perforce; and do you not irritate our horrible sword, for We shall wage most cruel war against you everywhere; nor let you trust in your treasure, for We shall cause it suddenly to run away from you like a torrent; beware to irritate Us." (page 207) Empires also does a great job in examining the growing Turkish presence in the Med as a naval power. Sulieman's reach and projection of power was made possible in part by the wonderful naval commanders that were available to the Sultan and by the absolute naval incompetence of the Europeans. In the end Sulieman's navy couldn't help him however. Crowley writes for the layman and explains himself clearly. The information that is presented is done so in context and though I'm not an expert on the subject feel that I've read a complete treatment of the topic. The maps that are included in the book make sense and are easy to read and the inclusion of the illustrations and woodcuts add to the information in

Published by Thriftbooks.com User , 14 years ago
My cultural blinders have long confined my view of 16th century history mainly to northern Europe and the Atlantic. Roger Crowley's "Empires of the Sea: The Siege of Malta, the Battle of Lepanto, and the Contest for the Center of the World" is a powerful corrective for that too-narrow point of view. The story of the struggle between the Islamic Ottoman Empire and Catholic Hapsburg Spain for control of the Mediterranean (with important consequences for the lands bordering the Mediterranean) as told by Crowley makes for compelling reading, filled with dazzling characters and astounding events. The Pope fleeing Rome in advance of an army of invading Turks was a real historical possibility, averted by a chain of circumstances perhaps much less likely than normally seems evident from this distance of time. Malta, a geographic key to the central Mediterranean withstood a massive Muslim attack and siege only by the narrowest of margins. And Lepanto, the last great battle of oared ships, could very easily have been lost by the Hapsburgs, and Islamic domination of Italy and the south of France and of Spain might well have followed, greatly altering the future course of events in Europe. Crowly has done a superlative job of narrating this slice of history and making it wonderfully vivid.

A very entertaining and educational read

Published by Thriftbooks.com User , 14 years ago
AS the published author of several books about Islamic terrorism I find this book hypnotic in its content, but sadly I had read it in two sittings, I could have read on and on. The history crammed into 300 pages is truly rivetting, and a sad reflection of the struggles we see today in the same parts of the world. The description of the sheer power of Suleiman the Magnificent, Muslim ruler of the Ottoman Empire at the height of its power, can only give the reader the slightest glimpse of the power the Ottomans held, in an epic struggle between rival empires and faiths for control of the Mediterranean and the center of the world. In Empires of the Sea, acclaimed historian Roger Crowley has written his most mesmerizing work to date - a thrilling account of this brutal decade - long battle between Christendom and Islam for the soul of Europe. It is educational and an awe inspiring read, give it a go, you wont be let down.
Trustpilot
Copyright © 2022 Thriftbooks.com Terms of Use | Privacy Policy | Do Not Sell or Share My Personal Information | Accessibility Statement
ThriftBooks® and the ThriftBooks® logo are registered trademarks of Thrift Books Global, LLC