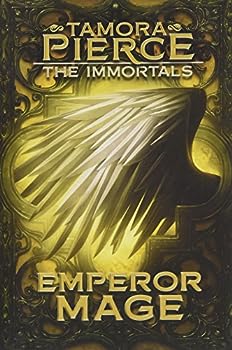 (Part of the Tortall Series and The Immortals (#3) Series)

Daine must confront a powerful leader in this third book of the Immortals series, featuring an updated cover for longtime fans and fresh converts alike, and including an all-new afterword from Tamora Pierce. When Daine is sent to Carthak as part of a Tortallan peace delegation, she finds herself in the middle of a sticky political situation. She doesn't like the Carthaki practice of keeping slaves, but it's not her place to say anything--she's only...

I love these books so much

Published by Jessica , 1 year ago
I love these books so much. I love this author. I already have a complete set but I've been looking to get matching cover sets for the hard covers. I'm so glad that I found this because I'm about to order the cover I want!

Is there trouble ahead ?

Published by Thriftbooks.com User , 17 years ago
"Emperor Mage" is the third book in Tamora Pierce's "The Immortals" quartet. If you haven't read the previous books in the series, please do so because then you will enjoy this one more. I want to point out, too, that some characters in Pierce's "Song of the Lioness" quartet appear here too, so if you have read it you will appreciate this book even more. Despite that, and as I already said in a previous review regarding "The immortals", this new series can also be read on its own. In "Emperor Mage", Daine has to accompany a delegation from Tortall to Carthak, a country that is threatening with war, and that might have been responsible for the troubles that Daine had to face in "Wolf-speaker". The delegation includes Alanna (the king's champion), Duke Gareth, and Daine's teacher Numair. As a gesture of peace, Daine is supposed to heal the emperor's cherished birds. But is that all he wants from her?. And why does her patron god give her scary new powers?. Is the badger trying to warn her that trouble is ahead?. The answer to those and many more questions, can be found in this book. Daine will take her young dragon Kitten with her to Carthak, and he will amuse you with his antics. Daine will also find another good companion in the form of a small monkey she rescues from being eaten, and names Zek. We will also have the pleasure of meeting again some of the immortals that appeared in the previous books, and will learn what happens when gods get really, really mad. On the whole, I highly recommend "Emperor Mage" as a good addition to "The Immortals" series. I believe that readers older than 10 will love his book, and that even some parents will enjoy reading it with them. Enjoy it! Belen Alcat

Published by Thriftbooks.com User , 21 years ago
Wow...this was an amazing book. It was my favorite out of all the immortal books. I love the way the setting is set up and described; it really jumps at the reader. This novel is about a girl named Daine who posesses wild magic. She and others from Tortall are visiting an emperor for peace talks. When the emperor turns out to be evil as was first thought, it takes courage and determination for Daine to put him down with the help of a special gift from the badger. Hey....those of you who have read it....is there something between Numair and Daine here? I first saw it in the first book and it gets stronger as the stories go along. Now I'm nearly sure that Numair loves her and I really REALLY have to read the fourth book. If there really isn't anything between them I'll cry...and that would just be wrong. Anyway, this series really really REALLY draws you in so BEWARE!!!!!! I loved this book and I hope that you will, too.

couldn't put it down!

Published by Thriftbooks.com User , 22 years ago
Ok, this book is the 3rd book in a series by my favorite author. I absolutely luv it! The story gets a little unrealistic with all the magic and gods and bringing animals back from the dead, but you can't let that stop you from reading it cuz it's just too good. I had a feeling Daine and Numair would be lovers, and can't blame Numair when he gets mad at Daine for hanging out most of the time with Prince Kaddar, heir to the Carthaki throne. I found Emperor Ozorne really hateful. The way Ms. Pierce makes all her characters makes the story go great. I really like how in each Tortallian series the author brings back the characters from the series before it, making the scenes more familiar and fun to read. You have just got to read all of Tamora's books, because they are the best! I recommend every single one of them to you.

Awww, our Daine is growing up!

Published by Thriftbooks.com User , 22 years ago
This book is really very different from the first two, because Daine seems so much older here. It was also very interesting, how we get to see a new side of our favorite 15 year-old. In Wild Magic and Wolf Speaker (my two books which are so worn they probably shouldn't be called books anymore), Daine was always this sweet, forgiving, pretty little angel. She seems so much more REAL. It's like Ms. Pierce's way of saying: "Yes, ladies and gentlemen, Daine IS capable of feeling jealousy, embarrassement, and she IS capable of mass destruction when she hears of the death of one of her dearest friends!" That, I think was a very good touch.

This book is the best I've ever read!

Published by Thriftbooks.com User , 23 years ago
Look, I may seem to be eccentric here, but when I read the part when Numair warns Kaddar off of Daine, I started laughing my head off. I mean it's just plain obvious that Numair's in love with the girl when he says stuff like "All of us would take it amiss if we thought for one moment she was being trifled with, particularly a young man who wasn't free to do the right thing by her." I can tell you that Daine was pretty steamed when she heard that. I felt like kicking him myself. I mean, what does he think he's doing when he has to get all protective over her? Sheesh, sometimes I think that Numair and Kaddar are fighting over Daine like male lions over a female lion! Now that is stupid, especially with Ozone looking on.
Trustpilot
Copyright © 2022 Thriftbooks.com Terms of Use | Privacy Policy | Do Not Sell or Share My Personal Information | Accessibility Statement
ThriftBooks® and the ThriftBooks® logo are registered trademarks of Thrift Books Global, LLC