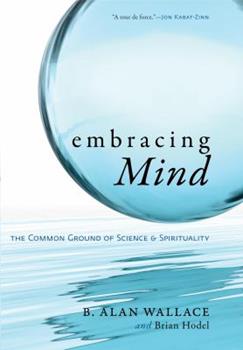 Embracing Mind: The Common Ground of Science and Spirituality

by Brian Hodel and B. Alan Wallace

What is Mind? For this ancient question we are still seeking answers. B. Alan Wallace and Brian Hodel propose a science of the mind based on the contemplative wisdom of Buddhism, Hinduism, Taoism, Christianity, and Islam. The authors begin by exploring the history of science, showing how science tends to ignore the mind, even while it is understood to be the very instrument through which we comprehend the world of nature. They then propose a contemplative...

The Integration of the Scientific Method with Contemplative Practice

Published by Thriftbooks.com User , 12 years ago
The central theme of B. Alan Wallace's work is that the empirical study of consciousness requires the integration of both the third-person perspective (i.e. the scientific method) and the first-person perspective (i.e. introspection or contemplative practice). In this book, he continues that theme. To begin with, Wallace discusses the theological underpinnings of science. He avers that the third-person perspective of science was actually based on the theological notion of a "God's-eye view" or God-like objectivity. This, he believes, is what eventually led to the rise of scientific materialism. Secondly, Wallace discusses in detail the following terms (which are not to be conflated with each other): 'science,' 'scientific materialism,' and 'scientism.' Thirdly, he discusses how the new physics, wrought by the theory of relativity and quantum mechanics, undermine the materialistic worldview. Wallace stresses the point that mental phenomena have no physical property and that consciousness cannot be scientifically measured; and yet, it is commonplace in the scientific community to assume that consciousness is physical. Next, Wallace argues that the only way to fully study consciousness is to employ the first-person perspective (i.e. introspection or contemplative practice) and the second-person perspective (i.e. the experts in contemplative practice training and communicating with those learning the practice). Wallace likens the second-person perspective to peer-review. Then, Wallace discusses the Buddhist contemplative practices of 'shamatha' (meditative quiescence) and 'vipashyana' (insight meditation). And finally, he discusses the Buddhist 'Middle Way' philosophy (Madhyamaka) and the way of the 'Great Perfection'(Dzogchen). What I especially enjoyed in this book was Wallace's discussion of the Buddhist concepts of 'substrate consciousness' (i.e. the individual's mindstream) and primordial consciousness (i.e. Dharmadhatu or Buddha-nature). Also, I found the glossary located in the back appendix to be particularly beneficial. The bottom line is that this is a wonderful read. I highly recommend it to those who are interested in science and mysticism and the common empirical or experiential method that both share.

Published by Thriftbooks.com User , 13 years ago
An excellent if somewhat scholarly approach to reconciling the Western scientific and Buddhist theories of the mind and consciousness. Wallace writes and is never dismissive in his commentary about traditional scientific approaches to the subject. If you enjoyed the Joy of Living this is your kind of read.

Published by Thriftbooks.com User , 13 years ago
"Embracing Mind" is a work of incredible brilliance and insight - think "Divine Matrix" on steroids!! Beware, the concepts in this book range from classical and quantum physics to "The Middle Way" approach to Buddhism with a good rational argument for linking science and spirituality, and specifically studying the mind/consciousness. As each concept in the book would take volumes to completely explore, the reader is given a rather "down and dirty" overview of each, with the purpose of showing clearly that scientific materialism has merely supplanted religious dogma with a more insidious form of mind and attitude control. This well written book is deep, rich, logical and has benefits for scientists, theologians and people like me: those that would like to bridge the two disciplines. Well worth every penny and every second!

Here are some quotes

Published by Thriftbooks.com User , 13 years ago
Wallace (and Hodel) do a very good job in "Embracing Mind." They break the book down into three parts. In Part One, Wallace takes another look at science, and where science may drift off into scientism. Wallace (page 22) tells us where scientific materialism carries hidden metaphysical assumptions - " what did that interpretation boil down to? The five principles examined previously: objectivism, metaphysical realism, the closure principle, universalism, and physical reductionism." Without going into detail what the principles entail, I will merely summerize what Wallace (page 23) concludes: "So strong was their enthusiasm for an all-embracing scientific worldview that they often allowed their hopes, dreams, and beliefs to masquerade as facts. They were especially impressed with Darwin's theory of natural selection. According to their own interpretation, natural selection meant that organisms best suited to win the competition for scare resources survived, passing on their advantageous traits to succeeding generations." Wallace (page 24) writes: "Social philosophers influenced by scientific materialism created social Darwinism, the view that nations and individuals competed for economic supremacy in an arena where only the `favored races' or toughest individuals would succeed. There was no room here for any softness or idealism and, of course, such a philosophy gave at least tacit approval to war, imperialism, and racism. In like manner, Karl Marx reduced all aspects of culture to economics." Writing on modernity, with its scientific progress, Wallace (page 25) writes: "We have been exposed to this philosophy throughout our lives - in the classroom, in the media, by our doctors, and through the decisions of government agencies ruling on health, the environment, and elsewhere. It has been pounded into us consistently for so long that we've come to accept it as common sense. This, we are told, is what `non-believers' accept as truth." Wallace (page 75) writes on the study of mind and brain: "It wasn't until the late nineteenth century that science attempted a formal study of the mind. Given the enormous influence of scientific materialism, it is not surprising that a physical approach - the study of behavior and the brain, the `gray matter' - held sway. By the early twentieth century, nonmaterial qualities attributed to the mind (thoughts, feelings, images, dreams, and so on) were neatly avoided by correlating them to the physical brain, with its internal physiology, and to physical behavior. This, mind was simply redefined as the brain." Wallace (page 82) writes: "By relying on the argument of mere correlations between mental phenomena and brain physiology, cognitive psychologists remind us of astrologers, who rely on correlates between patterns in the heavens and events on earth, rather than astronomers, who have actually explored the skies scientifically with telescopes." Wallace (page 83) writes: "Shouldn't cognitive scientists firs
Copyright © 2020 Thriftbooks.com Terms of Use | Privacy Policy | Do Not Sell My Personal Information | Accessibility Statement
ThriftBooks® and the ThriftBooks® logo are registered trademarks of Thrift Books Global, LLC