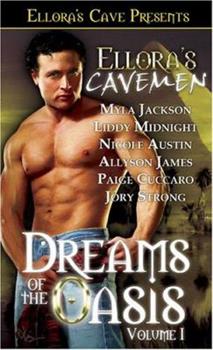 (Book #1 in the Dreams of the Oasis Series)

He is a Prime Warrior of the Dragon Clan. An alien to Earth. Fighting a battle that could tip the balance between two seperate worlds. But now his greatest mission isn't the battle, or the blood of the enemy. It's the love of one woman's heart. One he's lost once already and vows he will not lose again.

This book contains six sizzling stories told in a variety of genres that will tempt, tease, and exci

Published by Thriftbooks.com User , 14 years ago
THE AMBASSADOR'S WIDOW by Myla Jackson Agent Andre Batello is a chameleon. He has the ability to take on another person's identity based on a single strand of DNA. He was supposed to be on vacation, but an ambassador died the night before he was due to sign an important treaty. The ambassador is supposed to be estranged from his wife. The night that Andre must play the part of the ambassador is the same night that Briana decides to make one final last ditch effort at resurrecting her marriage. Andre has made it a policy to stay away from the cases where widows are involved. Briana turns out to be too tempting to resist Myla Jackson does a beautiful job depicting the self-doubt years of being in a loveless marriage can have on a woman as well as restoring hope in future happiness. CALL ME BARBARIAN by Liddy Midnight When Princess Cedilla sees twin barbarian gladiators for the first time, she experiences a burning on her chest resembling the stinging of insects, and an emotional reaction she'd never experienced before. As soon as her father realizes what has happened, he pulls her aside and disowns her. He knows what that burning on her chest meant . . . she is not his daughter. He even goes so far as to have her escorted from the amphitheater and left in an alleyway - where the twin gladiators find her. Held between them, the burning eased. She doesn't understand what's happening but she does know that with these two men she is safe. Being disowned may turn out to be the best thing that ever happened to her. Liddy Midnight uses a society where women are treated as property and barbarians are not tolerated except as gladiators and pulls off a true "in your face" kind of story! I love it. SPONTANEOUS COMBUSTION by Nicole Austin Maddy's internal fires need extinguishing and she'd like nothing more than for her best friend and firefighter, Jake, to spend a little time quenching her flames. Unfortunately, she believes he's more interested in ditzy women who are named after foods so Maddy figures she's out of the running. Jake's interested in Maddy but he thinks that she's way too smart for him. However, he knows that she can never resist a challenge. He has the perfect challenge to entice her too - if he can guess her wildest fantasy then she'll leave with him and they'll enact it. Nicole Austin gives us a deliciously wicked fantasy of having our deepest desires fulfilled. Let's face it, we all have fantasies. Wouldn't it be fun to be able to indulge just once? DRAGONMAGIC by Allyson James Witch Clymenstra knows Arys true name and therefore can call him from Dragonspace on a whim. Bound to her through magic, Arys longs for his freedom, a freedom that Clymenstra will unknowingly help to provide. To complete her spell, the witch needs a maiden. Naida is a young maid just discovering her powers. She chooses to visit Clymenstra to get the witch's opinion. Instead of knocking and talking with the witch, she glances thr
Copyright © 2022 Thriftbooks.com Terms of Use | Privacy Policy | Do Not Sell My Personal Information | Accessibility Statement
ThriftBooks® and the ThriftBooks® logo are registered trademarks of Thrift Books Global, LLC