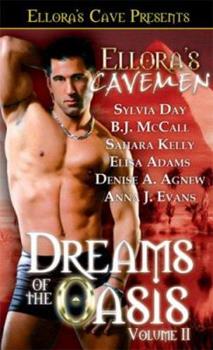 (Book #2 in the Dreams of the Oasis Series)

Book 3 in the Shadow of the Dragon series. As a child, Prince Bren of Xicanth saw the devastation created when a dragon is rejected by its mate...and vowed he would never unleash that kind of horror and suffering on a woman. The promise is simple to maintain until Tynan, the dragon who shares his existence, chooses a mate and demands to claim her as only a dragon can. Bren's own needs make it almost impossible to deny his dragon the taste of her flesh...

Published by Thriftbooks.com User , 15 years ago
TREASURE HUNTERS by Sylvia Day In 2015 the Conservative Censorship Committee banned all erotic reading material - both print and ebooks. Now the ban has been lifted and treasure hunter Rick Bronson has decided that the hidden database containing the ebook files is the treasure he intends to find. To find the ebooks, Rick needs help from literary antiquities expert Samantha Tremain. Together they race across the galaxy in search of the missing ebooks. They might get to them faster if it wasn't for all their hands-on research. ALLERGIC TO LOVE by Anna J. Evans Werewolf Marcus Ashton has found his true mate, Ella Bradley. Unfortunately, she has canine allergies that act up every time he's around and he's had to slip allergy medication into her cocoa. Ella caught him doctoring her drink and assumed that he's trying to kill her, or maybe it's a libido-enhancing drug. Either way she's determined to have him fired and then she'll be able to get control over her wayward body again. They give in to their baser needs only to discover a major problem that could leave them fighting like cats and dogs. ECLIPSE by Denise A. Agnew In hopes of rescuing her sister again, Dawn enters the Den of Wolves in New Orleans to search for the one man she knows can help her - her sister's ex-boyfriend Niall. Saving her sister from her destructive path may be beyond Dawn's abilities but Dawn learns that there's a possibility that she can help Niall. The only way he can be saved from his curse is by having sex with his true love on the night of the blood-red eclipse. Could she possibly be Niall's love and what if it doesn't work? GENESIS by B.J. McCall The Purge practically destroyed the entire Zyrai population. Dr. Tria Anara and four other young women only lived because they were off planet at science camp and hid on a lifeless moon. Without men there's no hope of keeping their race from becoming extinct. Fortunately, Captain Dax Rann heard Tria's call and with his all male crew navigated their ship to Tria's location. They thought they were going to aid and comfort but Tria has other plans - ones the men are more than willing to go along with. BLIND DATE by Elisa Adams Mike and Ruthie have been friends for years but Mike wants more and Ruthie never takes any of his sexual innuendos seriously. He can see her desire for him as well when she looks at him. Neither of them have been brave enough to do anything about it, until now. Mike knows that Ruthie would never agree to a date with him because she'd be afraid of ruining their friendship. Setting her up on a BLIND DATE is the only way he can think of to show her that he's serious about her. Imagine Ruthie's surprise when her date turns out to be Mike and he knows all her secret desires. SIR STEPHAN'S FORTUNE by Sahara Kelly Sir Stephen O'Mannion's "father" disowned him after discovering his Stephen's mother's journals in which she'd admitted that Lionel is not Stephen's father. He has no destina

Dreams of the Oasis Anthology

Published by Thriftbooks.com User , 15 years ago
Treasure Hunters by Sylvia Day Samantha Tremain is an expert in ancient erotic romance and looking for a little adventure in her life. Rick Bronson is a mercenary looking for a very valuable database of erotic e-books. When these two 23rd Century individuals meet, sparks fly as they try to find the ancient treasure together. Throw in a rival treasure seeker who happens to be an ex-lover and Sam finds the adventure she has always dreamt of. This is a very fun futuristic story. Sam and Rick together sizzle on the page, and I found them enjoyable both in bed and out. The story seems slightly rushed at some points, but overall it is a very enjoyable read. Allergic to Love by Anna J. Evans Marcus Ashton is a werewolf who has just found his mate. The only problem is that his prickly mate is allergic to him. When Ella Bradley issues an invitation for drinks Marcus jumps at the chance, not realizing the challenges that lay ahead. Ella has been hurt in the past, her mother was institutionalized for believing in the paranormal and Ella has already endured one abusive relationship with an ex-fiancé. She doesn't want or need another dominant man in her life; especially one who believes in the very things she thinks are crazy. Marcus and Ella make a very interesting couple. They are fleshed out and appealing, with a layer of humor that is hard to find in such a short story. This was my first book by Anna J. Evans, but it won't be my last. Eclipse by Denise A. Agnew Dawn Chartrier is desperate to find her troubled sister and there is only one man who can help her, Niall Machaire. Ten years ago, Dawn fell helplessly for Niall only to see him run off with her sister Maureen. But now Maureen is caught up in a world of vampires and werewolves and needs Dawn's help. Niall has been desperate for over 550 years. He has his own share of problems, and there is only one woman who can help him. Lucky for him, she just happened to walk right into his arms. Dawn and Niall together are scorching and their lust jumps right off the page. Niall's problem adds a different twist to the story, one that I wasn't expecting but thoroughly enjoyed! Genesis by B. J. McCall Dr. Tria Anara is charged with protecting the last of a dying race. Her planet was invaded and her people destroyed. Now all that remains are Tria and four young women. Dax Rann is a Captain in the Sarruian Expeditionary Force charged with finding any remaining trace of the Zyrai. When he chances upon Tria's Station, he initiates contact, bringing with him four crewmen. Dax and Tria are instantly attracted to one another, but Tria has responsibilities to her charges that she cannot ignore. This is a very unique world, with two likable characters. The addition of the women and crewmen adds another layer of spice, along with a very interesting plant that I found very intriguing. Blind Date by Elisa Adams Ruthie Ryan and Mike Allen have been best friends for 10 years. They know ea
Copyright © 2022 Thriftbooks.com Terms of Use | Privacy Policy | Do Not Sell My Personal Information | Accessibility Statement
ThriftBooks® and the ThriftBooks® logo are registered trademarks of Thrift Books Global, LLC