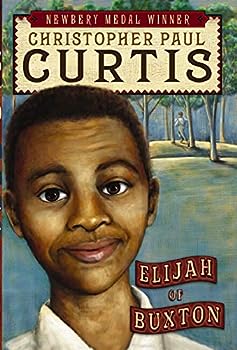 Master storyteller Christopher Paul Curtis's Newbery Honor novel, featuring his trademark humor and unique narrative voice, is now part of the Scholastic Gold line Elijah of Buxton, recipient of the... This description may be from another edition of this product.

Published by Thriftbooks.com User , 14 years ago
We used this book for our Mother/Daughter book club made up of girls ranging in age from 10 to 13. It was an excellent text for Black History Month. The book centers around the first free child born in Buxton, named Elijah. He is a fictional character, but the setting, Buxton, is an actual town that was settled for the sole purpose of providing a safe haven for ex-slaves where they could own property and participate in community government. Although there are some serious themes regarding slavery, the author handles them in a fashion appropriate for children. He also interjects humor into the story as well as page turning adventure. I would highly recommend this book to anyone wanting to give their child a better understanding of slavery.

Buxton's worth a trip

Published by Thriftbooks.com User , 14 years ago
I'll tell you upfront I'm a fan of Christopher Paul Curtis, and his young and "fra-gile" (read gullible and easily scared) hero Elijah is my favorite. If I have any criticism, it is that ELIJAH OF BUXTON Is a bit slow starting, but once the author hits his stride, watch out! Those who read this book will learn a lot about slavery and its after effects. By turns hilarious and heart-breaking, children who read it will realize that even the most "fra-gile" boy is capable of being a hero, and helping to make the world a better place.

Published by Thriftbooks.com User , 15 years ago
The Author's Note of "Elijah of Buxton" begins with a statement on the part of author Christopher Paul Curtis declaring that when you ask authors what their favorite published work is, they'll generally hem and haw and refuse to select just one title. Not Mr. Curtis. Unlike these writers, he has no qualms about selecting the book he has always loved the most (it's "The Watsons go to Birmingham", in case you were curious). Now ask a librarian what his or her favorite Christopher Paul Curtis title is. Go on. The answer is going to be interesting. Some might play the hem and haw game, but many will burst out with their favorites without hesitation. The Watsons Go to Birmingham - 1963! Bud, Not Buddy! Mr. Chickee's Funny Money! One or two brave souls might even select his teen novel on the sly. Not me, of course. My favorite Curtis novel is "Elijah of Buxton ", no question. And when I am old and grey I will claim that it was my favorite right from the start, publication dates be damned. To my mind "Elijah" is an example of everything Curtis does well. His historical research is superior. His characters heartwarming. His prose funny and heart-wrenching in turns. Plus, any book where a character is famous for having upchucked onto Frederick Douglass when he was a baby is worth its weight in gold. Be prepared to meet your favorite Christopher Paul Curtis book as well. Elijah Freeman's known for two things. First and foremost, he was the first child born free in the Elgin Settlement at Raleigh in Canada West (better known as Buxton). Second, when he was a baby he barfed all over the great Frederick Douglass. That's the kind of stuff no one ever lets you forget when you grow up in a town as small as Buxton. Populated entirely by escaped slaves and their children in 1860, Buxton residents make it their business to help new arrivals any way they can. Described as "fragile" because he cries easily, Elijah has a hard time convincing anyone that he's ready to be a man. But that's before Mr. Leroy, his friend, gets enough money to buy his family. Before he trusts that money to the slick-talking preacher in town. Before the preacher disappears with the money somewhere in Michigan and Mr. Leroy wants Elijah to come with him to track the double-crosser down. And before Elijah must puzzle through and come to terms with a decision that means life or death. When it comes to writing, doff your hat to Mr. Curtis. The history of Buxton was what really hooked me from the start. As the Author's Note in the back points out, Buxton was a real place and it thrived and survived beautifully. Economically self-sustaining with an enviable school system, the place was practically custom made for a children's novel. And the more I learned about the place, the more I wanted to learn. I wouldn't be shocked if next year we see a crop of fine Buxton-related non-fiction children's titles sweeping the marketplace. As for Curtis's subject matter, not only does he go in for great setti

Lauren's Review of Elijah of Buxton

Published by Thriftbooks.com User , 15 years ago
Christopher Paul Curtis has created another masterpiece in the realm of children's literature with his new novel, Elijah of Buxton. Like his previous books, Bud, Not Buddy and The Watson's go to Birmingham - 1963, Elijah of Buxton depicts the struggle of a young boy to understand and overcome the atrocities of racial injustice. Eleven-year-old Elijah Freeman takes readers on a journey to the final destination of the Underground Railroad, the Canadian settlement of Buxton. Like many contemporary children, Elijah enjoys a life of freedom characterized by normal childhood activities. As the first child born free to parents who were former slaves, Elijah is sheltered from the harsh realities of slavery. His only knowledge of slavery is obtained through secondhand accounts painfully recounted by residents of Buxton. Young readers will laugh out loud as they accompany Elijah on hilarious adventures with Hoopsnakes, Moth Lions, and Chunking Stones. Students will feel empathy for Elijah as he realizes that he isn't the brightest bulb in Mr. Travis's class. Children struggling to grow into young adults will identify with the shame Elijah feels when he is teased and rebuked for being a "fragile boy". A vivid cast of characters peppers the book with spicy personality and captures the reader's interest more effectively Elijah's chunking stones capture fish. As Elijah interacts with former slaves, he realizes that the scars of slavery go deeper than the flesh. Elijah stumbles upon a hornet's nest of human nature when he utters a racial slur which causes a former slave to attack him. Throughout the book, glimpses of racism periodically appear, but Curtis skillfully encourages the reader to befriend Elijah so neither the reader or Elijah will face the atrocity of slavery alone. When at last Elijah crosses the Detroit River into America and encounters slaves, the reader feels as if he or she is alongside Elijah, facing danger, feeling nauseous, and desperately searching for methods to free the trapped victims of slavery. As tears of empathy begin to roll down reader's cheeks, they almost expect to find Elijah there beside them, identifying with their deep sorrow. As a child who has faced bigotry firsthand, I felt inspired to become actively engaged in changing the world after reading Elijah of Buxton. Elijah Freeman's courage reminds us that it's not enough to merely be a survivor of hatred. As children we share a moral obligation to become "conductors" of social change. Elijah of Buxton leaves readers with a universal truth understood by all groups who have been oppressed and enslaved; as long as Hope survives, a brighter tomorrow exists for future generations. I was deeply honored to be one of the first readers of this monumental book which chronicles the story of one boy's journey into adulthood set against the backdrop of a peoples' journey into freedom. Librarians, teachers, parents and students, make room on your bookshelves for what is s
Trustpilot
Copyright © 2022 Thriftbooks.com Terms of Use | Privacy Policy | Do Not Sell My Personal Information | Cookie Preferences | Accessibility Statement
ThriftBooks® and the ThriftBooks® logo are registered trademarks of Thrift Books Global, LLC