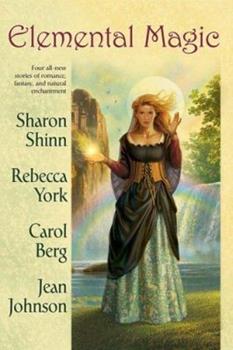 Romance and Magic in Four Stories

Published by Thriftbooks.com User , 13 years ago
BARGAIN WITH THE WIND by SHARON SHINN (3 ½ stars) After a whirlwind courtship, the new owner of Grey Moraine estate marries the love of his life, Lady Charis. But the narrator, Grey Moraine's housekeeper, is worried. Lady Charis is certainly charming and seems to be honestly in love with her kind and loving husband, but she is also capricious and mysterious and has an odd grudge against the powerful Horton family. Although no exact time period is given for this book, it does have a Regency feel, with balls, teas and social calls (and social snubbings) prominent. However, it is also a world where superstitious beliefs of elemental spirits persist: protective earth spirits, mercurial water spirits, and dangerous air spirits who can give a person anything she wants--for a terrible price. I originally read this collection for this story in particular, as I love Sharon Shinn. I have read nearly everything she's written, including her other short stories in To Weave a Web of Magic and The Queen in Winter. Not only do I like her writing style, but I also enjoy her consistently happy endings. However, while she manages to create an interesting story with a very intriguing main character in the form of Charis, this is not the light tale of Cinderella romance that the book description suggests. From the first line, the dark undertone of the story is clear: "I was there the first time the master caught sight of the woman who would destroy him." Those who are looking for the typical romantic Shinn story will be disappointed. If you don't have such expectations then you can enjoy the story for its own merits (and it does have many). BIRTHRIGHT by JEAN JOHNSON (4 ½ stars) Since Arasa and her twin sister were born via C-section, no one knows which one is the first born and heir to the throne. After setting off on a quest to find the answer, Arasa encounters Elrik, a young mage who helps give her the final clue on how to prove who is the first born: both twins must make a dangerous journey together and the rightful heir is the one who is protected by the land itself. I thought this was a very well written story and especially enjoyed the climax, where Arasa must protect herself and Elrik from a terrible betrayal. Arasa and Elrik are both highly likeable characters, although I did feel that the story dragged a bit when they have a short "I want you," "I want you, too" scene and then an intimate encounter which is rather unnecessary in a story that's only a little over 80 pages. Of course, I am not a romance novel fan, which might put me in the minority considering how popular that genre is. UNMASKING by CAROL BERG (5 stars) Joelle is training to be a Searcher, a sorcerer who uses her magic to exorcise the demons that plague humanity. When a spy from a hostile kingdom enters her homeland, she is chosen to be part of a plan to convince the spy that the people of her kingdom are primitive and know nothing but simple illusion spells (and thus are not a

Three excellent and one good stories of mystical romance

Published by Thriftbooks.com User , 14 years ago
This book consists of four stories, loosely themed around Air, Earth, Water and Flame. The stories are all widely different but each has its own fascinating concepts with appealing characters. BARGAIN WITH THE WIND by SHARON SHINN This first story in the collection was a beguiling tale apparently set in England in the Regency period. Duncan Baler has recently inherited the house Grey Moraine after the death of his uncle and his cousin on the same day. Duncan arranges a social event at the house and it is gatecrashed by a beautiful young woman, Charis, who immediately catches Duncan's attention. Over the next week Duncan and Charis spend time together and then get married and Charis begins to settle into life as Lady of the Manor. However things might not be as they seem. The whole story is narrated from the point of view of the housekeeper, Nettie, and she spends a great deal of her time listening at keyholes and overhearing conversations in other rooms. Nettie begins to suspect that Charis may have some secrets she is hiding from her husband. Why, for example, does she seem bent on alienating the next most important household in the county? Why is she so worried after hearing Nettie's explanations of the Air Spirits and the disastrous bargains young women will make with them to get what they want? What is Charis's secret and is she something other than she appears? This story is well written and always interesting as we learn, along with Nettie, in snatches of overheard conversation, what's actually going on. If this is set in the English Regency period there are some historical and language mistakes but they are common errors and don't detract too much from the story. It's an interesting read and wasn't at all predictable which I very much liked. Five stars. BIRTHRIGHT by JEAN JOHNSON This story almost couldn't be more different than the first in this collection - one of the advantages (and sometimes disadvantages) of collections of this nature. This story is set in a fantasy world with mages and magical lore. Arasa is on a quest to discover whether she or her twin sister were the firstborn as there was some doubt at their birth. Arasa has discovered a way of finding out by retreading a walk that one of her ancestors did between "The Womb" and "The Heart". "the Heart" is the name of their major city but the only "Womb" she knows is in a faraway land. The story starts as Arasa is trying to find a good map of the route to the Womb of Tarden; she is almost tricked by an unscrupulous chap but fortunately a Mage who is also in the Inn offers her the use of a Truth Stone and it soon becomes apparent that the map-seller was trying to confuse her. In discussion with the Mage she very quickly discovers that she's on the wrong track for the "Womb" anyway and that it actually refers to a temple in her own land. She and the Mage, Elrik, agree to travel together to her land so that he can visit the Mage academy and so that she has some protection on the

Published by Thriftbooks.com User , 14 years ago
"Bargain With the Wind" by Sharon Shinn. At Grey Moraine Lord Baler meets Lady Charis, who is in trouble. As they elope he is remains ignorant of the air that surrounds him, but could kill him. "Birthright" by Jean Johnson. Elrik the mage escorts Arasa on a quest to learn who will inherit the fire. "Unmasking" by Carol Berg. Joelle is a searcher, who has failed at passing the final exam that would allow her to fight demons; yet whether it is in water or land, she will use her skill anyway to save those she can like Gareth the vegetable farmer. "Huntress Moon" by Rebecca York. Although she feels as if she is on hell on earth, to save her mother from a terrible fate, Zarah accepts being sold as a slave, who must spy on Griffin to regain her freedom. These four entertaining elemental romantic fantasies are fun quest tales that sub-genre readers will want to read. Harriet Klausner
Copyright © 2020 Thriftbooks.com Terms of Use | Privacy Policy | Do Not Sell My Personal Information | Accessibility Statement
ThriftBooks® and the ThriftBooks® logo are registered trademarks of Thrift Books Global, LLC