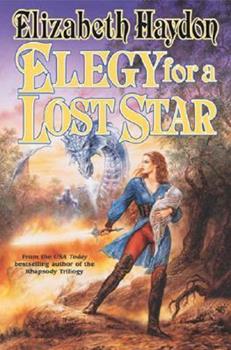 Elegy for a Lost Star (The Symphony of Ages)

(Book #5 in the Symphony of Ages Series)

Elegy for a Lost Star sets the stage for a major turning point in the Symphony of Ages series. The dragon Anwyn--who has lain for three years in deathlike sleep in a grave of rock and black coal is freed by the cataclysm that concluded REQUIEM FOR THE SUN. sisoriented and confused, she remembers only two things-the person who trapped her in dragon form and locked her in the grave-Rhapsody-and an all-encompassing desire to wreak vengeance. Meanwhile,...

The Calm Before the Storm...

Published by Thriftbooks.com User , 13 years ago
Elegy for a Lost Star is, perhaps, one of the most gripping and breathe-taking book of the series. Once again, we have Achmed and Grunthor coming closer and closer to completing Ylorc, and Rhapsody being pregnant with Meridion. Ashe, Anborn, Gwydion and Llauron are there as well in all there glory. And Anwyn just won't die... This book caused me to double-take on my favorite character, Achmed The Assassin King of Ylorc. He may seem like he does some pretty rotten things for selfish reasons (so what else is new?) but his intentions are good. And we are once again reminded that Achmed knows a heck-of-a-lot about the world and it's mysteries, which Rhapsody isn't as All-Knowing as we sometimes are lead to believe. His obsession to build the Lightcatcher threatens his friendship with Rhapsody, but like I said above, Rhapsody fools herself and makes everything worse. Talquist is stirring evil and pain, molding holy living stone into a Titan-being of the former son of Micheal, The Waste of Death/Breathe, Faron. While I read more and more about Talquist, he held a surprising resemblance to the former Master of The Brother, Tsoltan the F'Dor, as odd as that might sound to some. But while Talquist is a former Merchant who has risen to power with the help of one of the scales of the Stolen Deck, Tsoltan had risen to power with the help of the spirit, hosting demons F'Dor. With this resemblence, and war coming on it's way, dejavu is likely as the Wrym Lands are threaten with war by Talquist as Serendair was with Tsoltan. Anwyn is on a rampage, emerging from the Hintervoid, destryoing all in her path to hunt down the Lady Cymrian, Rhapsody. While Rhapsody goes through her pregnancy with the help of Achmed, Krinsel, Ashe and Elynsynos, Anwyn is ever-searching for the Lirin Namer. When Anwyn does catch-up with her, it will take Achmed, Elynsynos and Llauron to stop her, when both Achmed, Rhapsody and Meridion are trapped within an ended Wyrm... Elegy for a Lost Star is a fantastic book. A nice installment to the World Wide Bestselling series The Symphony of Ages. While most series becomes dull and boring after a while (like Dragonlance by Weis and Hickman was for me), and lost there former shine, I believe EFALS carries on Mrs. Haydon's masterpiece quite nicely. The book still causes me to feel for the characters, laugh, smile and cry when other books can't make me beat an eyelash. So if you haven't read past Requiem for the Sun, pick-up Elegy for a Lost Star, one of the grandest fantasy books to be written to date. I'm sure you won't be disappointed.

Published by Thriftbooks.com User , 16 years ago
After just reading the free online prologue of the latest book in Robert Newcomb's horrible series, I was compelled to run to my bookshelf and kiss my Elizabeth Haydon books. There is something so wonderful about reading the work of an intelligent author who respects the intelligence of her readers. Haydon's books are filled with beautiful wriing, black humor, unflinching action and, most importantly, exceptionally well-drawn characters who you CARE about. I have not really given a damn about any fantasy character since Sam Gamgee, and so it's a delight for me to finally be reading about people who matter to me, wondering what happens to them next, and sometimes fearing for them, since Haydon has no problem killing them off rather brutally. Elegy is a wonderful book, even if it's not the same doorstop length as her earlier offerings. Without spoiling, I just want to say that any one author who can write something as horrifying as the carnival of freaks [the Monstrosity] in the same book with the most gorgeous description of seeing inside an expectant mother's womb is a blessing for the discriminating fantasy fan who does not want to drown in the hogwash out there these days. Buy this book, read this series.

A Breath of Fresh Air in the Genre

Published by Thriftbooks.com User , 17 years ago
In the midst of stories that devote entire novels to endless exposition, strain to breathe life into a story that should've ended seven books ago, or preach endlessly about political ideals while fabricating trite cataclysms for the heroes to avert in suspiciously convenient moments of inspiration, The Symphony of Ages is a rare gem of a story that the reader hopes will continue, instead of desperately awaiting the final volume. The characters' abilities to use various types of magic almost seems natural, unlike the contrived, "the hero is born gifted," strictly categorized magic of other fantasy series. Magics range from using music to heal a wounded man to intuitively locating an unknown path to manipulating air for the purpose of speaking. The world is rich with culture and magic and rings true even while leaving you breathless with the impossibility of it. The conflicts are believable, rising from the world we already know and not from some forgotten corner of the globe where a cataclysmic evil has been waiting all this time, beknownst to everyone EXCEPT the main characters. In short, if you're sick of the same-old same-old of trite fantasy, sit down with Rhapsody: Child of Blood and work your way through to Elegy for a Lost Star, and remember why you fell in love with fantasy in the first place.

Published by Thriftbooks.com User , 17 years ago
I have to admit that I toyed very briefly with giving this book 4 stars instead of 5, because it lacked the breadth and depth of previous Haydon novels, and I think a little more background and interaction with the characters was in order for those unfamiliar with earlier books. However, considering its much shorter length -- a little over 300 pages, compared to nearly twice that size for Requiem for the Sun, the first installment of this trilogy, and nowhere near the 850+ pages for Destiny, the last installment of the first trilogy -- you still get a lot of bang for the buck. It is hard to top the cunning menace of the F'dor, yet Haydon still manages breathtaking suspense and action with the awakened Anwyn and the transformed Faron. I was delighted to see the emphasis on dragons in this book, and those who are fond of Haydon's beasts will be very satisfied. I would have liked to have seen more of Grunthor (my very favorite character, with Achmed a close second). And we at last have the birth of Meridion, the time manipulator; I'm hoping at some point in this series we get to see the time line that Meridion changed, which Haydon has tantalizingly hinted at on a few occasions. If you are as entranced with these characters and Haydon's writing as I am, you will enjoy this book. If you are expecting another long, complex novel like the previous ones, you may be slightly disappointed and simply have to wait for the next installment, which Elegy has set up beautifully.

Published by Thriftbooks.com User , 17 years ago
Rhapsody and her half-dragon husband Ashe are enjoying the quiet serenity of married life. Both are elated that she is carrying his child and look forward to raising a brood of kids together. The calm has allowed their allies King Achmed and Grunthor to make progress on restoring the kingdom of Ylorc. Finally, they celebrate that their ward Gwydion has become an adult. Everything is perfect. Not! Vengeance is in the air. Assassins plan to kill Achmed because of his killing of their lead; Anwyn the Dragon has arisen like a phoenix with plans to kill Rhapsody who put him into the death-sleep that he lived for the past three years. Finally Sorbold Emperor Talquist has a new ally the evil seer Anwyn. The war to end wars seems imminent. The middle book of The Sympathy of Ages series is a solid fantasy that is a bit different in tone than the first series (see Rhapsody) or the first book in this trilogy (see REQUIEM FOR A SUN) as this tale contains much more action, but a lot less philosophical mythos. The story line starts slow as readers are lulled into the calmness that seems to be everywhere the trio are, but that serenity ends rather quickly into hyperspeed action packed thriller. Fans of the series will enjoy this rousing tale, but must adjust to the different tone. Harriet Klausner
Copyright © 2020 Thriftbooks.com Terms of Use | Privacy Policy | Do Not Sell My Personal Information | Accessibility Statement
ThriftBooks® and the ThriftBooks® logo are registered trademarks of Thrift Books Global, LLC