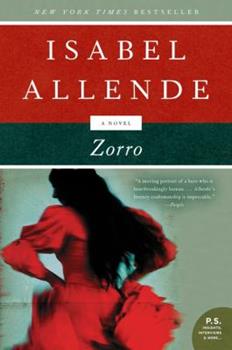 A child of two worlds--the son of an aristocratic Spanish military man turned landowner and a Shoshone warrior woman--young Diego de la Vega cannot silently bear the brutal injustices visited upon the helpless in late-eighteenth-century California. And so a great hero is born--skilled in athleticism and dazzling swordplay, his persona formed between the Old World and the New--the legend known as Zorro.

News about Zorro You Never Knew

Published by GranSarh , 3 years ago
The book really went into detail about Zorro, his childhood, youth and then, finally, the reason he became Zorro. I appreciated the historical detail about the times, dress and actions of the different classes. It was interesting reading. I recommend this book.

The making of El Zorro

Published by Thriftbooks.com User , 14 years ago
Isabelle Allende has created a believable childhood for Diego, his family, friends, and adventures. The historical context is very interesting as well. I have always been quite a sucker for this romantic hero, going back to the television series as a young girl--so I am probably a fairly easy "sell". I am reading the book in Spanish (with some cheating in the English translation). I find the language elegant and highly readable in either language. This book was a great idea--wished I'd have thought of it!

One of the best Allende's Books

Published by Thriftbooks.com User , 17 years ago
I really enjoyed this book, it was a refreshing way of seeing Zorro, since his very beggining, before that even, and we could understand why he become what he become and why he was doing what he was doing. Me encantó este libro, tiene una dosis perfecta de ironía pero aun así me llegó al corazón, pudimos enterarnos por qué el Zorro hacía lo que hacía y cómo se convirtió en él.

Published by Thriftbooks.com User , 17 years ago
This is the first time that I have read anything by Isabel Allende. Initially, her narrative style put me off a bit. I'm used to a lot on dialogue that describes the situations rather than a lot of narration telling me what is happening. HOWEVER, within a couple of chapters, I was completely pulled into the story by Isabel Allende's tremendous ability to invite her reader into the world that she so adroitly creates. I found myself smiling as each piece of the puzzle that makes up the story I know so well fell into place. Allende allows her readers to observe young Diego De La Vega as each of his skills, personality traits and burning desires snap neatly into place. None of the characters motivations are left to chance, which makes for wonderful story telling. Her detailed descriptions of early California, Barcelona and Panama make the reader believe that Alende actually has seen and experienced the 18th century world that she describes. Also, she pulls no punches when it comes to her description of the indians and their mistreatment by early European aristocrats. The deep rifts between the upper class and lower class that is currently still in place in Mexico is made clear. Although the world of 18th century California is detailed, this story is character driven. Diego De La Vega (Zorro) is an extremely three dimensional character that runs the gamit of human emotion and Allende allows her readers to see his flaws as well as his attributes (as is so often true, the two are one and the same). Bernardo, who in previous incarnations of the Zorro story is a typical "sidekick", is anything but a "sidekick" in this novel. Bernardo is a complex, spiritual young man that in many ways is the moral superior of Diego. He is a brother, but also a wise guide, keeping the brash young man on his life's path. Rather than serving Diego because he is of "higher" caste, Bernardo serves out of love and a deep sense of destiny. In Yogic terms, these two men have found their darma, their purpose in life. "Zorro" is an interesting look at the legend as well as a wonderful, non-judgmental description of a world of the near past. "Zorro" is fiction, but Allende fills this story with historical fact as well clever analysis of the ramifications of many of the political decisions made at the time. Every dollar you spend on this one is an investment in thought and entertainment.

A zesty saga about the making of a legend.

Published by Thriftbooks.com User , 17 years ago
Isabel Allende's enchanting new novel, "Zorro," traces the origins of the legendary folk hero, who evolved from a privileged and foolish young man into an intrepid warrior. Zorro's mission was to use his wits, agility, and formidable fighting skills to defend the poor and downtrodden in early nineteenth century Spain and California. Allende laces her narrative liberally with humor, irony, wit, and dozens of colorful characters. The story begins with the birth of Zorro's alter ego, Diego de la Vega, in Alta California. We follow Diego to Barcelona, Spain, where he changes from a playful and callow youth into a passionate young man. The author enlivens her story with intrigue, sword fights, romance, treachery, adventures on the high seas, prison breaks, and fascinating historical background about the relationship between the Native Americans, the Spaniards, the French, and the Catholic Church during those turbulent times. There is never a dull moment in this nearly four hundred page book, and the translation from the Spanish by Margaret Sayers Peden is excellent. Without compromising the spirit of fun that permeates her tale, Allende makes it clear that the Indians in North America were victims of genocide. The Spanish conquerors came to the New World, greedy for land and treasure, and they murdered the Indians, burned their villages, and enslaved those who survived. Allende creates a number of unforgettable Native American characters. Bernardo, Diego's devoted "milk brother," becomes mute after his mother is brutally assaulted; White Owl, Diego's grandmother, is a respected shaman and medicinal healer who teaches her grandson to be faithful to his spiritual guide, the fox; and Toypurnia, Diego's mother, is a fierce warrior who cannot be tamed, even by the love of the handsome hidalgo, Alejandro de la Vega. "Zorro" works so well because Allende goes back to storytelling basics. She puts interesting people in exotic settings, and she has them contend with nasty villains who will stop at nothing to get what they want. Finally, she features a brave, albeit flawed hero, who risks his life, with panache and style, to fight for justice. If this sounds like a Spanish "Star Wars," that's not far off the mark. Although the characters, the setting, and the time frames may vary, well-told stories about the battle of good versus evil will always find a place in people's hearts.
Trustpilot
Copyright © 2022 Thriftbooks.com Terms of Use | Privacy Policy | Do Not Sell or Share My Personal Information | Accessibility Statement
ThriftBooks® and the ThriftBooks® logo are registered trademarks of Thrift Books Global, LLC