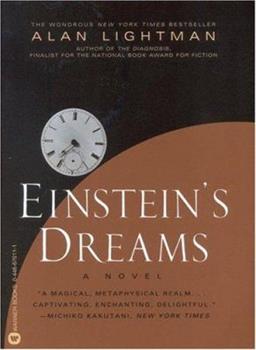 Thirty vignettes take the reader back in time to 1905, when a young patent clerk named Albert Einstein was putting the finishing touches on his theory of relativity.

Published by Ryan Krueger , 1 year ago
This book is extremely interesting in many ways, and focuses on worlds in which time works different. I would definitely recommend it to anyone who likes a book that gets you thinking.

Published by Thriftbooks.com User , 19 years ago
Imagine a scientist and a writer contemplating the range and meaning of life experience and collaborating on how best to depict them on the printed page. Now imagine the scientist and the writer bundled into one person and you have Alan Lightman, professor of physics and writing at MIT.This is a book of deceptive brevity and focus. It is not a novel. Instead, it is a collection of short essays lucidly joined togheter by the common thread of supposing that time could exist in forms apart from the linear that we take to be true. It brilliantly seizes upon the familiar and revered Albert Einstein (who hypothesized that time slows as one approaches the speed of light) during his patent office days. Einstein features in these essays only tangentially; rather, it is his well-known idea about the progress of time that provides the reader with a logical foundation and a springboard for ruminations (dreams) about other courses time might take. Time might be circular, endlessly repeating, it might run backward, it might go so slowly as to be almost frozen, it might last a day, or it might last forever. The possibilities are explored in thirty separate ways, and Lightman the scientist is imaginative and exciting indeed.This is all very interesting, but the crux of the essays, it seems to me, is how the movement of time would affect people living in these different scenarios. Thinking about how these things might happen, the book opens a window into the human heart. Here Lightman the writer displays insight, conveyed with delicacy and fragility. The tender longings of the parent, for example, are, with a few deft strokes of the pen, drawn in aching wishes that their babies, toddlers, and children could stay - O so much longer - the little ones they are. Lightman has an unusual gift for conveying meaning, not only with his sentences, but also with sentence fragments. Ordinarly this would exasperate me, but in this book, the technique added to its soaring beauty.Einstein's Dreams is so short that you can whiz through it, but I think that, in so doing, you would shortchange not only the depth this book has to offer, but also your own reading pleasure. If it is read slowly, so as to soak in its messages and the wonder of its language, you will come away with much joy and much to think about.

Published by Thriftbooks.com User , 19 years ago
first of all I would like to say that I am a 16 year old who really loves jack's novels, esspeialy the ones with Dillon in them.thunder point was really good it had a great story line and followed on from the other books perfecaly apart form dillon books I also liked Solo, The last place god made, Sheba, Night of the fox,The savage day,Luciano's Luck,Sad wind from the sea and Dillinger.I have 20 books and counting. JACK HIGGINS RULES. buy his books support the master so he can keep writing these great wokes of art.

Understanding Reality by Imagining the Alternatives!

Published by Thriftbooks.com User , 20 years ago
This book deserves many more than five stars for its potential to make you a better thinker!!One of the most creative people I know (holder of dozens of patents that have created two new industries) first told me about this book. He said that Einstein's Dreams was better for stimulating new ideas than any other book he had ever read. Naturally, I added the book to my list . . . but didn't get around to it right away. That was a mistake! I found Einstein's Dreams better for stimulating creativity than all other creativity books I have read combined. I wish I had read Einstein's Dreams when it first came out. Einstein, of course, was famous for this "thought experiments" in which he would imagine what would happen if he were placed in different circumstances. For example, what if he were riding on a photon of light? What would happen if he shined a flashlight ahead of him? How would someone riding on a parallel photon of light perceive his flashlight if he flashed it toward the other person? The result of most of these thought experiments was to understand the nature of time, and to create his famous special and general theories of relativity. (If you want to know more about this subject, be sure to check out Professor Stephen Hawking's latest, The Universe in a Nutshell.)Alan Lightman has created a novel built around 30 "dreams" (or scenarios) that make differing assumptions about time, and describe how the lives of ordinary people living in Switzerland in 1905 would be changed. In the process, you will probably have several epiphanies. For example, so much of the way we run our lives depends on the fact that time runs forward in what normally seems like a linear, predictable way . . . but without giving us certainty about what happens next in our lives. If time operated in a fractured way, for example, we would find little incentive to try to create connections to others and to create something better for the future. The other epiphany you will probably have is that you can take everything that you believe to be well understood, and think about that factor as being dozens of different things using these dreams as templates. For example, you can apply the ideas in this book to an academic discipline like linguistics, art history, behavioral psychology, or anything else. In the process of thinking through these "factual" areas in terms of assuming that reality is different, you will immediately see "reality" more clearly and objectively than ever before. Finally, you will realize that the greatest limitation we have in creating new learning is our lack of imagination. Fill in the empty spaces in our minds with new questions, new possibilities, and new problems, and vast new insights immediately emerge without using computers, mathematics, or any sort of technology. All you have to do is dream . . . or day dream, if you prefer. My suggestion for you is that you plan to read this book several times. After the first time, when yo

Back to Basic in this no holds barred thriller!

Published by Thriftbooks.com User , 24 years ago
Sean Dillon is saved from a Yugoslavian firing squad if he will help the British recover Martin Borman's briefcase from a U-Boat at the bottom of the Atlantic Ocean. Once again Jack Higgins has done the unbeleivable by turning the most dangerous terrorist that the British Government has ever opposed, into a highly skilled, although intractable, agent on the side of good. Skilled as a pilot, scuba diver, and a deadly killer, Dillon turns his energy toward the salvage of the most controversial documents to come out of the war. Along the way, Dillon spars with Scotland Yard detective, seconded to Ferguson, Hanah Bernstien. She is both attracted and repelled by Dillon. Jack Higgins books are always suspenseful, and with the added tension of Sean Dillon, and whether he is on the level, or planning some other agenda, makes this one of his all time best books
Copyright © 2020 Thriftbooks.com Terms of Use | Privacy Policy | Do Not Sell My Personal Information | Accessibility Statement
ThriftBooks® and the ThriftBooks® logo are registered trademarks of Thrift Books Global, LLC