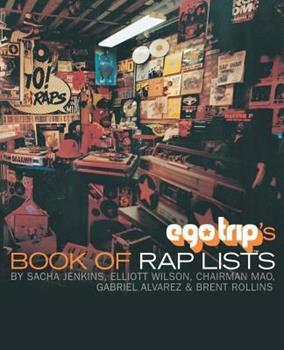 Ego Trip's Book of Rap Lists is more popular than racism Hip hop is huge, and it's time someone wrote it all down. And got it all right. With over 25 aggregate years of interviews, and virtually every hip hop single, remix and album ever recorded at their disposal, the highly respected Ego Trip staff are the ones to do it. The Book of Rap Lists runs the gamut of hip hop information. This is an exhaustive, indispensable and completely irreverant bible...

This is a BIASED Review!!

Published by Thriftbooks.com User , 16 years ago
Pretty much everything that needs to be said has already been said here about this incredible book. Yes this book can rightly be considered the BIBLE of hip-hop history. Not only is it informative and entertaining, but it's done with tongue-in-cheek humor. Now the reason why my review is biased is because I'm fortunate enough to be listed in this book. In 1983 I was part of the group Rickey G & the EverLOVING 5 MC's and we recorded the single "To The Max". Well... as far as I knew it was played a couple of times by Mr. Magic in New York, and that was about it. Yet lo and behold it's listed on the Holy Grail that is Hip Hop's Greatest Singles by Year (1983). The Editor's of this book have Exquisite Taste... but that's just my humble opinion. But in all seriousness, anyone who loves Hip Hop will thoroughly LOVE this book!

EVERY HIP-HOPPER SHOULD OWN AND CHERISH THIS BOOK!!!

Published by Thriftbooks.com User , 20 years ago
Like Busta Rhymes constantly says, you won't know "the 1/2" until you get your hands on this exhaustive collection of lists, trivia, lyrics and titles. I haven't found one important rapper who hasn't been touched on in this book, and most of it will leave you rolling ("Why Rappers Don't Dance No Mo'"), thinking ("Most Racist Rap Songs") or reflecting ("Most Misunderstood Lyrics"). Try your closest hip-hop heads in a game of trivia after this, and you will CLEAN UP: this book has it ALL!!! Quit being cheap/lazy/triflin' and GET THIS QUICK!!!

This book is comedy!

Published by Thriftbooks.com User , 21 years ago
Ego Trip unfortunately no longer exists as a magazine, but this book should be remembered as their most significant contribution to hip-hop as a cultural icon. It doesn't attempt to be objective--many of the lists reflect the originator's tastes and biases (see for example "Women Russell Simmons Wishes He Could Have Dated Before He Got Married")--but it does attempt to be thorough. From hip-hop history to fads to speculation on Tupac's death, Ego Trip's Book of Rap Lists covers it all with tongue in cheek. Best of all, it doesn't attempt to glorify or deify--and they have pictures of the Biz Markie puppet.

Published by Thriftbooks.com User , 22 years ago
this book has so many topics and is alot of fun.the best mc's,best rivials on wax,free-style.songs that mention po-po problems,cars,sex,girls,drugs,clothes,hoods,and dreams etc.. very well written.it gives another insight to the rap world that most folks don't hear about.the rappers that have worked with michael jackson and lauyrn hill's all-time favorite artists.2pac segement that will have you thinking? puffy gets dissed so much on record it ain't even funny.it's as important as anything that rolling stone has put out period in there history.must have book.fun,insightful,and a piece of history.

an absolute must for hip hop fans with a sense of humor!

Published by Thriftbooks.com User , 22 years ago
this book is a wonderful blend of information and irreverant humor. you can find everything about rap under the sun--from the first hip hop record ever recorded to what rappers are related to what songs slick rick wishes he had written. there are also list from lauryn hill, slick rick, big boi (of oukast) and dj premier, just to name a few. if you think you know everything there is to know about rap, you don't. but you will after reading this book!
Trustpilot
Copyright © 2022 Thriftbooks.com Terms of Use | Privacy Policy | Do Not Sell My Personal Information | Accessibility Statement
ThriftBooks® and the ThriftBooks® logo are registered trademarks of Thrift Books Global, LLC