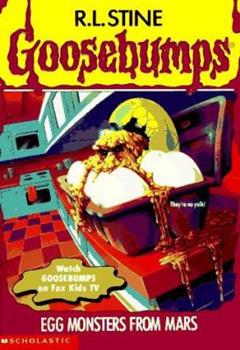 It's the size of a softball. It's covered with blue and purple veins. It's the egg that Dana Johnson finds at Easter time--and it's no yolk! Neither is the slimy yellow creature inside. Is it really an egg monster from Mars?

Published by Thriftbooks.com User , 15 years ago
I just LOVED this book!! Starting with an innocent easter egg hunt,you end up biting all of your fingernails off!!

Published by Thriftbooks.com User , 20 years ago
Now this book is just as interesting as the title is!!! Its more sci-fci then horror. Its not scary, but is VERRRRRY interesting!!! Dana Johnson is a normal 12yr boy with a totally bratty sister who get's whatever she wants whenever she wants. She demands an egg hunt for her birthday party... And so of course she get's one!!! Now Dana to his suprize finds an egg the size of a softball in his yard with purple viens, and it throbs... He keeps the egg in his sock droor to keep it from his little sister. Soon one day he finds it hatched in his sock droor. But its nothing that normally fromes from an egg... Its a small yellow,gooey,slimy creature with beedy black eyes. Dana is shocked, but he wants to know what it is and he takes it to the science lab in his town to have them check it out. And that's just where the fun begins!!!To find out the rest read this interesting book it has and interesting ending as well!!!God Bless ~Amy

Published by Thriftbooks.com User , 21 years ago
Did you ever had an egg hunt in your backyard and you found something that's out of this world? A kid name Dana Johnson did in the book Egg Monsters From Mars by R.L. Stine. dana tried to show his egg to his parents but they would not to listen to him, so he kept it in his sock drawer. The next morning the egg hatched into a horrible yellow glob. Dana went to a lab two blocks away to find out what of creature it was. the scientist name Dr.Gray said it was an egg creature from Mars. Dr.Gray had had found four dozen of these egg creatures already. Dr.Gray is making Dana stay in the lab against his will with the egg creatures. The creatures can communicate with each other by chattering. The lab was cold and Dana thought he was going to get frostbite. There was no way out of the cold room that he was in . He had fell a sleep, and when he woke up he heard his father's voice. Then Dr.Gray lied to Dana's father, he said Dana wasn't there, but he was. Dr.Gray was going to do testing on Dana tomorrow morning. Dana was freezing in the lab. All of the egg creatures joined thogether to from a blanket to cover up Dana to kept him warm. The next Morning Dr.Gray was mad when he had found the egg creatures all over Dana inthe lab. The egg creatures started coming after DR. Gary, but I will not tell you what happens next so you will read this book. Are you excited to read Egg Monsters From Mars to find out what happens next? I invite and encourage you to read Egg Monsters From Mars by R.L. Stine.

this book is the best ITS COOL

Published by Thriftbooks.com User , 21 years ago
THIS BOOK IS COOL THATS WHY I chose to put it on line if you ever get time to read this book pleaes do. this book is about a girl that finds a egg from MARS she takes it to a science lab to see what it is inside but the boss locks her up but why? the rest is yours to find out my nick name is gohan DVZ MY AGE IS 11 ONE MORE TIME PLEAES PLEAES PLEAES READ THIS BOOK IT WAS THE BEST BOOK I HAVE EVER READ

Published by Thriftbooks.com User , 22 years ago
I like this book! Not bad! I hope I read this book for a long tim
Trustpilot
Copyright © 2022 Thriftbooks.com Terms of Use | Privacy Policy | Do Not Sell or Share My Personal Information | Accessibility Statement
ThriftBooks® and the ThriftBooks® logo are registered trademarks of Thrift Books Global, LLC