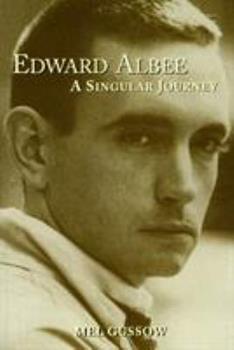 (Applause Books). Mel Gussow's critically-acclaimed biography of the three-time Pulitzer Prize-winning playwright ( Seascape , A Delicate Balance , The Zoo Story ), who first electrified the American theatre scene in the 1960s with his groundbreaking The Zoo Story followed by the legendary Who's Afraid of Virginia Woolf?

Informative page-turner for an Albee fan

Published by Thriftbooks.com User , 16 years ago
Albee is without doubt my favorite living playwright, so I'm a little biased, but I read and enjoyed this book, and felt like I got to know Albee a lot better in the process, without losing any of my respect for him. Since his plays are so much about family and the pursuit of "success", it's worthwhile to know about how Albee--who was adopted--grew up. I recommend this to anyone who admires Albee's plays, and also to sceptics who want more insight on the ideas and the man behind them.

Published by Thriftbooks.com User , 18 years ago
Gussow's biography of Edward Albee is a more-than-fair depiction of the playwright. It is a concise overview of the creative mind behind the American Absurdist movement. It steadily charts Albee's childhood, schooling, and progress in the theater. Gussow goes to great lengths to cite the history of Albee's works, their reception, and the performers who acted in them. It balances criticism with accolades while shying away from any type of theoretical correlation between Albee and his works (as most literary biographies lend themselves via the Formalistic approach). Though incomplete (Albee is still writing steadily), it is a great introduction into the life of one of the foremost playwrights in American theater.

One of the best theatrical biographies I've read

Published by Thriftbooks.com User , 19 years ago
With all due respect to Tennessee Williams, Arthur Miller, Lillian Hellman and William Inge, Edward Albee is the most important American playwright to emerge since Eugene O'Neill. I don't say best because "best" is too subjective a term to be applied to the arts. Albee is important because of the influence his work has had on playwrights such as Arthur Kopit, Sam Shepard, John Guare and David Mamet. Mel Gussow has produced an indelible portrait of this artist. One revels in Albee's current success - The Tony Award for "The Goat or Who is Sylvia?" and a Pulitzer Prize for "Three Tall Women." However, what Mr. Gussow's biography illustrates brilliantly is that Albee hasn't staged a "comeback." Indeed, Albee never went anywhere - it was the audience and the critics that abandoned Albee. Throughout the past forty years Albee has continued to produce masterful plays - award winning plays - "A Delicate Balance," "All Over," "Seascape" and "The Lady from Dubuque" - plays which are finally gaining the recognition and stature they deserve.The personal story is here as well. Albee was adopted and raised by people who were emotionally aloof to the needs of a gay adolescent. The relationships with Terrence McNally and Jonathan Thomas (his companion for the past thirty years), friendships with John and Elaine Steinbeck, Carson McCullers, William Flanagan, Alan Schneider and all those leading ladies from Uta Hagen, Colleen Dewhurst, Jessica Tandy and Irene Worth to Marian Seldes, Rosemary Harris, Elaine Stritch and Maggie Smith. The story of how the Pulitzer Prize board denied him the honor for "Who's Afraid of Virginia Woolf?" even after the prize jury had voted unanimously for the play. It's all here - warts and all - best of all is the happy ending.

Published by Thriftbooks.com User , 21 years ago
The primary strength of the book is that the author has known Albee since _Who's Afraid of Virginia Woolf?_ opened on Broadway. This isn't written by someone who just decided to do a book but by someone who has been preparing to write it for years without knowing it. There's depth here, insight into the plays and the man behind them.

Published by Thriftbooks.com User , 22 years ago
Mel Gussow takes the reader on a singularly intelligent, yet emotionally astute journey into Edward Albee's works and life. He also evokes the New York scene in which Mr. Albee began his career. A beautifully balanced biography of a major figure in the American theatre. I loved it.
Copyright © 2020 Thriftbooks.com Terms of Use | Privacy Policy | Do Not Sell My Personal Information | Accessibility Statement
ThriftBooks® and the ThriftBooks® logo are registered trademarks of Thrift Books Global, LLC