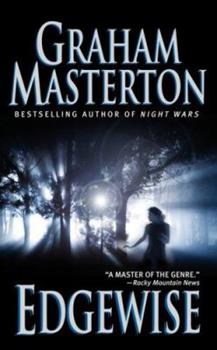 A woman unleashes an invisible Native American spirit (the Wendigo) to help her find her children, but then the unstoppable demon begins to haunt her!

Published by Thriftbooks.com User , 13 years ago
This was a very scary book. A little graphic at times. but a very very good book. Makes you think twice about messing with certain forces! Be careful who you make a promise to! Highly recommended.

Hunt this one down...

Published by Thriftbooks.com User , 14 years ago
There are a few things we can count on Graham Masterton to deliver with each horror novel he writes. First, he will flesh out characters who we can believe, understand, empathize wtih, and relate to. Second, he will pick an out-of-the-ordinary, supernatural entity of some kind, research the heck out of it, and present it to us in amazing detail. Lastly, he will wrap up his tale in a climax that is original, and that goes beyond just a hack-and-slash resolution; A Masterton climax is a thinking-person's climax. With Edgewise, Masterton explores the Native American, North Woods legend of the Wendigo, and delivers in all of the areas we would expect him to. Lilly BLake is a real-estate broker and single mother. Her life is changed one night by a group of masked men who break into her home, kidnapping her children, lighting her on fire, and leaving her for dead. When the FBI fails to locate the missing children, Lilly vows to get them back, no matter the cost. At the advice of a co-worker and friend, she seeks the aid of a Native American shaman, to whom Lilly promises to pay an unobtainable fee. The shaman calls upon the fierce tracking skills of the Wendigo, the ancient spirit of the forest and the hunt. But when her children are returned, and their kidnappers gruesomely dealt with, Lilly comes to realize that she cannot repay the debt owed to the Wendigo. Soon, the tables are turned, and Lilly's own family becomes the target of the animalistic spirit's hunt. Unless she can find a way to appease the Wendigo, she will lose far more than her children. Delivering in a style that is a bit more gruesome than many of his recent works, Masterton has produced a real page turner with Edgewise. The only question I'm left with is this: Why is Masterton not a bigger name in the genre of horror?

Ultimate chase through life and death

Published by Thriftbooks.com User , 14 years ago
Graham is my favorite writer. He is the one whose books I have discovered in my father's library during my teenage years and whose imaginative writing has started my insatiable taste for horror books. No one writes like Masterton and his use of folklore and different legends, spirits and creatures mixed with the world of humans always comes out with shockingly dark results that somehow seem possible. Some of my favorite books by the author are the earlier ones, I still have a very distinctive memory of books such as Tengu, Prey, The Sphinx, Picture of Evil, Pariah, Flesh and Blood, The Ritual and countless others. Edgewise is his newest work out in paperback and this time the topic deals with Native American spirits and folklore. I have previously enjoyed the Manitou books by Graham, especially Manitou 2, which had a banging ending that I still remember so this story line felt familiar and in Graham's hands it melted like putty. This tale begins with a violent intrusion to Lily Blake's house. In the middle of the night the action starts off right away before the reader gets their guard up. Her children are taken away and Lily is left to die in a horrible way. Unable to locate her kids she waits for weeks for the help from FBI but when all conventional methods of search come up with no results, she turns to a darker side for help. A Shaman by the name of George Iron Walker helps to summon the Wendigo, spirit of hunt that smells like burnt electricity and appears to be a hologram of a deer man, standing on two feet, limbs twisting backwards, antlers with sharp points and black eyes, oh yeah did I mention that he's a cannibal, that's right, he kills by eating his pray. He sniffs for tracks of her missing children and disappears to take his revenge on the person who took them. When things go awry Lily realizes she took on more than she could handle and the horrific invisible to some demon is out on a hunt for her and her family. The bodies pile up; people aren't as safe as they appear. On top of that certain characters tracks though the line of morals and trustworthiness making the reader ponder the actions that are turning out in front of their eyes more. It all happens in whirring snow storms, dark woods with grey wolves and quiet night houses that squeak when the hunter is in them. Graham was breathed great atmosphere to his novel; the visuals are very strong and stimulating. The deaths were also pretty graphic, nothing I couldn't handle but my eyes would open rally wide on some sentences, I simply had to read them out loud to my boyfriend who was near by and watched for his grossed out reactions. The ending as usual was great; he never fails to connect all the plots into one tight braid that sometimes leaves something to the imagination after the last page is read. Edgewise was fast paced and easy to read, something that can be devoured in two sittings and thought of pleasantly after. I really enjoyed finding out what the title really me

Published by Thriftbooks.com User , 14 years ago
This is my second foray into Masterton's bizarre world, and it will certainly not be my last. He does a marvelous job with the drama of the mother losing her children and her desperation to get them back, spending a full third of the book on her plight alone. It's an exceptional buildup to the introduction of a suspicious private eye, a determined Native American and his mystic daughter, and the legendary Wendigo. In fact, the descriptions and history of the Wendigo alone make for a good read by itself, but the context of this character plays perfectly in this story. It seamlessly blends the modern day with past indiscretions against the Native American people, their legends, and the universal need to remain conncected...to ones people, family. Perfect book? No, but five stars for a throughly entertaining read in one afternoon.

Published by Thriftbooks.com User , 14 years ago
But Masterton Still Delivers much of his Uber Violence and superb Supernatural material, with next to no Sexual elements other than hinted at romance, or hoped for romance;This is one major difference in this novel. Almost as if Masterton is toning down his sexual elements. For long time fans, the mix of the Supernatural with Horror, and Violence, with the Almost necessary sexual byways, seems to have changed in some ways. Even with Manitou Blood, Masterton has a Lovely mix of sexually charged women in the plot. Anyways, none of the absences of long time Masterton elements detracts from the story. Masterton has a set of strong female Characters in EDGEWISE( Even a Female Villain has a Powerful role, but is still full of subtle, sometimes not so subtle, sexual charm), much like he has in some recent Horror excursions. In the Search for her children, The Wife Loses Much, but gains an insight into the ways of the other world that few have known. This is another gem of a Masterton novel; Great Character work, and Masterful scares.
Copyright © 2020 Thriftbooks.com Terms of Use | Privacy Policy | Do Not Sell My Personal Information | Accessibility Statement
ThriftBooks® and the ThriftBooks® logo are registered trademarks of Thrift Books Global, LLC