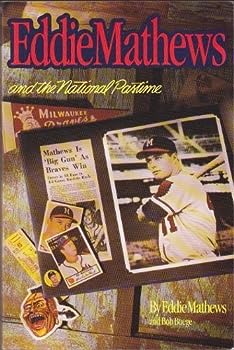 Eddie Mathews and the National Pastime

This book is a wide-ranging study of the varieties of gamelan music in contemporary Java seen from a regional perspective. While the focus of most studies of Javanese music has been limited to the... This description may be from another edition of this product.

Published by Thriftbooks.com User , 21 years ago
I'm only 44 years old, yet fondest memories when growing up on the northwest side of Milwaukee were going to Braves games at County Stadium their last two years (1964-65) prior to moving south to Atlanta. Eddie Mathews was the idol of every eight or nine-year old in Milwaukee who had any interest in the game of baseball. I knew back then he was a hit with the fans (while not necessarialy so with the press), and this book reinforced my memories. Two sports memories that flash in mind daily involve Eddie Mathews. The first involving a game I attended at County Stadium in 1965 with the score tied in the ninth inning and two runners on with two out and Mathews stepping up to the plate. There as an eight-year old, I said to myself he is going to win this with a three-run homer. One pitch later, he did just that! The other involved his last game ever when he played third base in the 4th game of the 1968 World Series and went 1 for 3 against Bob Gibson (almost 2 for 3 had he been five more feet to the left of the right field foul pole when he knocked a Gibson fast ball over the right field roof of Tiger Stadium). This book is beautiful -- an absolute must for those having vivid memories of the Milwaukee Braves as I have. Word of caution: the book is highly addictive and the reader will find it to be nearly impossible to put it down. A true sports classic written on a classy, frank, and honest human being. Eddie Mathews with his book is indeed "UNFORGETTABLE"!

Published by Thriftbooks.com User , 21 years ago
It was over 5 years ago that I met Eddie Mathews at a local restuaurant in Santa Barbara, California. I had heard so many stories about Eddie and how tough he was, but when he invited me to sit at his table and talk about the old families that he knew and I grew up with, it was a wonderful 4 hours of memories. This book tells of the Real Eddie Mathews and his love for the game of baseball and of course the Brave fans that were so supportive of the team! I enjoyed every minute reading the book and it was well followed in the sequence of his career. Eddie Mathews is what baseball is all about, a kid who wanted to win and be the best he could be in the Major leagues! I asked my cousin, Ted Williams of the Bo Sox if he knew of Eddie Mathews? Ted was very complementary about Eddie and said, " they ( Management ) knew he was going to hit 500 home runs for the Braves orgainztion and he did just that." On February 18th 2001 Eddie Mathews was laid to rest. The Baseball World Lost A True Baseball Player of the Game. Beleive me, " Only a handful like Eddie Mathews " This book is a fine tribute to the life Eddie Mathews in the National Pastime. Signed, MAHerrera

Published by Thriftbooks.com User , 22 years ago
A VERY INTERESTING ACCOUNT OF A VERY UNDERRATED PLAYER IN EDDIE MATHEWS. EDDIE PLAYED IN THE SHADOW OF HANK AARON, SO HE DIDN'T GET THE TRUE CREDIT HE CERTAINLY DESERVES. HE DOES A GREAT JOB OF DESCRIBING LIFE IN THE 50'S TO THE 60'S WITH THE BRAVES. THE STORY IS SIMPLE, FACTFUL, AND HONEST. EDDIE'S CANDID APPROACH IS VERY SUCCESSFUL AND REFRESHING. HIS EXERPTS ABOUT BOB UECKER ARE HILARIOUS. HIS ADMISSION WITH ALCOHOL IS VERY OPEN BUT DISTURBING. I LOVE THIS BOOK. A MUST READ.

A Frank and Entertaining Biography of a Great Homerun Hitter

Published by Thriftbooks.com User , 23 years ago
This thoroughly enjoyable book - a must for any Milwaukee Braves fan - recalls a simpler time when baseball was pure fun and its heroes a bit more like you and I.A solid-fielding third baseman and one of baseball's fiercest sluggers with his bat or fists, Mathews writes matter-of-factly, but with a wealth of baseball details and colorful anecdotes, about his extraordinary career as a player, coach, manager, and scout.Inducted into The Hall of Fame in 1978, he hit 512 career homers, more than any other third baseman in history until Mike Schmidt. In the book Mathews reveals that after a year in which he smashed 47 homers and hit .302 with135 rbi's, Braves management offered him a $3,000 raise - to $17,000 per year! He also describes Milwaukee's 1957 World Championship year, including the heroics of Bob "Hurricane" Hazel, the ultimate kid-who-came-outta-nowhere story. With Hank Aaron Mathews formed the most powerful one-two punch in major league history, their 863 combined homeruns as teammates still a record. He speaks of his friendship and respect for Aaron and remembers the game's wild and wooly "golden age" - a time of beanball wars, brawling on and off the field, hard-drinking, and good times. He comes across as a modest, down-to-earth former athlete, looking back fondly, and with only a few regrets, to his fun-filled days in the big leagues.

Published by Thriftbooks.com User , 24 years ago
Eddie Mathews talked about the tin Army quonset hut that served as the visiting team clubhouse outside the old Houston Colt .45's stadium in the pre-Astrodome days. I also remember that hut because in August 1962 during a Braves-Colt .45's series I hung around it long enough to get quite a few Braves autographs on my program. As a youngster from Louisiana, they were my first major league autographs.I am little surprised that Eddie Mathews did not mention the Saturday Game of the Week on T.V. circa 1964 when Gene Oliver of the Braves hit a double on the left field chalk line that was ruled fouled, followed by a heated argument with the umpires, Oliver stepping back in the box, hitting the very next pitch for a home run, only to have the plate umpire rule that play had not been resumed so the home run did not count. As I recall from the T.V., Oliver went into a rage and was ejected from the game. "Eddie Mathews and the National Pastime" is a a very informative baseball journal, highly readable.
Trustpilot
Copyright © 2022 Thriftbooks.com Terms of Use | Privacy Policy | Do Not Sell My Personal Information | Cookie Preferences | Accessibility Statement
ThriftBooks® and the ThriftBooks® logo are registered trademarks of Thrift Books Global, LLC