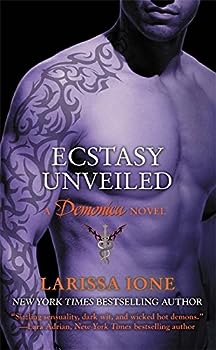 (Book #4 in the Demonica Series)

This description may be from another edition of this product. A DEMON ENSLAVED Lore is a Seminus half-breed demon who has been forced to act as his dark master's assassin. Now to earn his freedom and save his sister's life, he must complete one last kill....

Published by Thriftbooks.com User , 11 years ago
I have read each of Larissa Ione's books, and they keep improving with every book. In this story, Lore is a classic tortured hero who earns the love of an angel. Fast-paced and emotionally-gripping, I loved every minute. It's my favorite of all the Demonica books.

Published by Thriftbooks.com User , 11 years ago
This is a great, sexy series. Ione continues with the fourth Sem brother introduced in the last book, Lore. Lore is a reluctant assassin who is in it to protect the one he loves, a sister. Unfortunately, Lore is stuck looking like the bad guy with his newly found brothers. Things only get worse when Lore is hired to kill someone that will only get him further in trouble with the very ones he is trying to befriend. Don't worry, there's a soon-to-be angel just waiting to put him in his place. This series is fast-paced with rounded and easily liked characters. Very sexy scenes, too. Ione brings back past characters but doesn't over do it and bore the reader. Although this book could stand alone, I would recommend reading the books in order simply because it would make the story more enjoyable. I look forward to the next one.

Blow Your Socks Off Good!

Published by Thriftbooks.com User , 11 years ago
Wow! This series gets better and better with age. The fourth installment was awesome! I am officially now a Larrissa Ione fan, I guess she just took some getting used to. I'd compare her to a cross between JR Ward and Kresley Cole in this Genre. Her writing style weaves you in and out of dual plots and character arks like JR Ward is known to do. For instance if you don't read the books before you may not fully understand what's going on with the current characters. There is certainly a darker side to her stories, no fluff here. Not to say some of her characters don't have a good since of humor and she manages to slip in so many creatures, demons, and such -- all the while it never feels fake or forced. The low down on this book is as follows: Lore is a half human half incubi demon who has two very big problems. One, he is an enslaved assassin and two his right arm kills anything with even the lightest touch. Now, for good reason he is also super good looking - he is an incubi - so he has to have sex everyday in order to survive. I know that sounds a little cheesy, but it is a book about incubi so duh. Lore has been sent on a fool's mission, one he can't refuse or it will mean the death of his sister Sin. So being the good brother he is he heads out to kill Kynan a once mortal man who now carries the weight of Armageddon on a small amulet around his neck. Kynan can't be killed by just anybody and there are reasons why Lore is the best man for the job. Since Kynan processes such an important babble he is assigned an Angel to watch over him and make sure nothing goes awry. That Angel is named Idess and she is hell bent on ascending to Heaven as soon as possible. She won't ever earn her wings though if Kynan dies so she's got a dirty date with Lore. They battle it out a few times and things end up heated with Lore chained to her bed to prevent him from slaying Kynan. Now that's just the beginning. You still have Sin, the only female Incubi in existence, and her steaming hot Werewolf/Vampire bad boy. 3 other incubi brothers who are full of drama. A evil Slave owner that hangs out in the pit of hell with a mysterious fallen angel who threw me for a loop well over a 200 pages in, and you can top that off with a cursed demon who wants the incubi brothers to pay in spades. I don't want to spoil the plot which I usually do on other books because I think Ms. Ione has a gem here with plenty of plot twist and thrills. There is never a dull moment, perfect really, when it comes to paranormal romance. I was completely enveloped in the story line and all the glorious trappings. She is very descriptive with what she sees in her mind's eye it makes for a fun and exciting place to escape to while reading.

TO GOOD FOR HER OWN DAMN GOOD

Published by Thriftbooks.com User , 11 years ago
This book was an amazing addition to the series!!!! If you haven't read or bought it yet what the hell are you waiting for? She's the only other author that has books that I can't put down. I picked this book up Friday night and started it. And by Sunday night I was done. Her books are so riveting that you get sucked in and don't want to put them down. ***SPOILER ALLERT*** Lore finally finds someone that he can touch and be with. Then he has such conflicts with his brothers and his sister asking him to stay away from them. When Lore finally figures out what's going on with the help of his new lover he make everything right. Ione leaves a cliff hanger with Sin at the very end doing exactly what she's good at and has always wanted.

Another Awesome Story In The Demonica Series!

Published by Thriftbooks.com User , 11 years ago
Lore is a halfbreed Seminus demon/human and Eidolon, Shade and Wraith's half brother. He is an assassin who has a slave bond to demon master "Deth" until he satisfies a debt owed to the creature. If you have read the Demonica series, you will know that Lore's assignment was to assassinate Eidolon, Shade and Wraith as part of the evil antagonist's plan in the previous two novels, "Desire Unchained" and "Passion Unleashed". Lore, of course did not fulfill his contract. "Ecstasy Unveiled", opens 3 weeks following the riveting conclusion of "Passion Unleashed", and Lore is having to `pay the piper' as it were regarding his failure to succeed in his assignment. Lore is an enigma because unlike full-blooded seminus demons in the Demonica world his mother was a human which causes the genetics to go awry. What does this mean? Instead of having a gift that can be used for good (Eidolon for instance, can heal with his touch) Lore can kill by touching any creature, human or demon with his right hand. In addition, his dermoire markings, or glyphs are faded snaking from his right shoulder to finger tips. Conversely full-blooded sem's dermoires are much darker and they have a personal glyph around their neck. Lore also has the ability to resurrect the dead in certain circumstances but because of the slave bond, Deth suffers as a result of that intervention. The penalty for using his gift of resurrection or if he does not accomplish a `contract' is exceedingly unpleasant. Lore learned soon after his S'genesis (final maturation cycle) that intimate relations with a female as with his touch causes death, he therefore has had to find other ways to satisfy the sexual requirements inherent to Seminus demons. Lore is a lonely conflicted character, he doesn't particularly like killing, but he has been left with little choice. When Deth gives him the assignment to assassinate a close friend and family member of the Sem brothers, Lore is again in a catch 22 situation. Oh, and Lore? He is HOT... Memitim or `angel in waiting' "Idess" is eager for her ascension to heaven and she feels it is close. She has spent centuries in solitude and loneliness and has missed her brother "Rami", her mentor, terribly. Memitim are `Primori' guardians, which means they have charges to keep safe until they fulfill a destiny important to the world. If a Memitim doesn't keep their Primori safe then their time on earth is extended. Idess is an ancient, wields considerable power, she is beautiful, and lethal in battle. As fate would have it Lore's `target' is one of Idess's Primori and so the hero and heroine of this novel meet under extremely adversarial circumstances. Lore and Idess's relationship develops slowly over the course of the story from literally battling each other into a soul deep love. Idess has been celibate for centuries but she is not a virgin which I found refreshing and unusual given her "angelic" status. I became completely invested in Idess and Lore's story and coul
Copyright © 2020 Thriftbooks.com Terms of Use | Privacy Policy | Do Not Sell My Personal Information | Accessibility Statement
ThriftBooks® and the ThriftBooks® logo are registered trademarks of Thrift Books Global, LLC