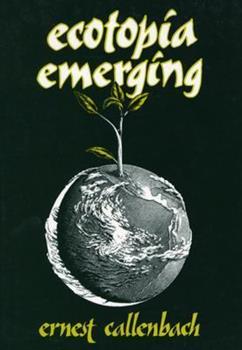 This description may be from another edition of this product. Fiction. This prequel to ECOTOPIA is a multi-stranded novel that dramatizes the rise and triumph of a powerful American movement to preserve the earth as a safe, habitable environment. Its heroine is...

Published by Thriftbooks.com User , 16 years ago
In the book Ecotopia emerging I discovered a world that could quite possibly turn out to be our future. That is the future of America. In the book a small group of people form a survivalist party bent of saving the environment. In the book Lue Swift a promising student develops a solar cell that will change the world. Other people in the book do not see change over time and act immediately. This includes a group of commandos that begin to attack polluting industrial plants believed to cause cancer and states succeeding from the government of the United States, No longer United. Is this possibility in truth? Yes it could really happen. People could realize that America will not become environmentally friendly over time, and decide to take action immediately. The stories in the book are about people in the United States. The issues the book deals with are mainly the pollution, destruction, and degrading of the earth's environment. The political group the Survivalists want to break away form the United States Government, but corporate America doesn't see the same way as the survivalists. Lou Swift, a young science student, invents a way to produce electricity using the sun as an energy source. How do you think the major oil, coal, and gas companies felt when the heard of this. Another character that is important to the book is Vera Allen a politician who is loyal to the survivalists. Could the events in this book ever happen? I believe it is only a matter of time until they do. We will keep polluting the environment until a group of people take drastic action. Is this a good book the answer is yes. Buy it, read it, and enjoy it. It is worth every cent. I strongly recommend that anyone interested in politics or the environment in general read it, for you will love it, and learn from it. It is also a great book for students to read for it tells us what could happen if we don't change our ways.

Published by Thriftbooks.com User , 18 years ago
This is one of my favorite books. In contrast to its clunky predecessor _Ecotopia_, this book actually has a plot that, if a wee bit melodramatic, is fun and engaging. It's a bit chilling that the administration running the U.S. that the Ecotopians split off from in this book is actually less insane than the Cheney/Bush/Exxon government we have now. Ecotopia Emerging tells the story of how the Pacific Northwest secedes from the U.S. and establishes a sane lifestyle. This book does go a little far in glorifying the lifestyle it describes but if you can deal with that you'll probably enjoy it.

Ecotopia: how to get there from here

Published by Thriftbooks.com User , 22 years ago
Once you have read Callenbach's other famous book, Ecotopia, you're bound to feel frustrated. He holds out a vision of a wonderful country - but the path there involves breaking off from the U.S. and a short war.Surely the road to heaven doesn't have to be paved with bad intentions; Ecotopia Emerging shows a way. This "prequel" is about the period of formation of Ecotopia, but in this revised version, the new nation manages to find its way without blood being shed, or severing communications with the rest of the United States.In addition, Ecotopia Emerging is an engaging tale in its own right, particular its telling of the coming of age of the main character, Lou Swift. It would be worth reading even without the message - a rare accomplishment for a utopian novel.

The inspiring "prequel" to _Ecotopia_

Published by Thriftbooks.com User , 24 years ago
A fictional account of the events leading up tosecession of the Pacific Northwest from theUnited States. The book interweaves thelives of several people: a young inventorof a new solar cell who decides to put herinvention in the public domain rather thanmarket it; a politician who breaks fromestablishment politics to form a new ecologicalpolitical party; and several grassroots environmentalactivists. As their lives progress their activities lead up to the formation of the newnation which was the topic of Callenbach'sprevious novel, _Ecotopia_. If you enjoyedthat book, this one is a must read as well.If you haven't read it and want to know whatthe fuss is about, I would recommend thatyou read _Ecotopia Emerging_ first and thenread _Ecotopia_. An excellent book on several levels.
Copyright © 2020 Thriftbooks.com Terms of Use | Privacy Policy | Do Not Sell My Personal Information | Accessibility Statement
ThriftBooks® and the ThriftBooks® logo are registered trademarks of Thrift Books Global, LLC