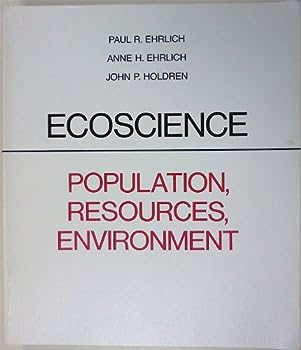 This description may be from another edition of this product. ecoscience: population, resources, environment

Published by Thriftbooks.com User , 11 years ago
Forced abortions. Mass sterilization. A "Planetary Regime" with the power of life and death over American citizens. The tyrannical fantasies of a madman? Or merely the opinions of the person now in control of science policy in the United States? Or both? These ideas (among many other equally horrifying recommendations) were put forth by John Holdren, whom Barack Obama has recently appointed Director of the White House Office of Science and Technology Policy, Assistant to the President for Science and Technology, and Co-Chair of the President's Council of Advisors on Science and Technology -- informally known as the United States' Science Czar. In this book Holdren co-authored in 1977, the man now firmly in control of science policy in this country wrote that: * Women could be forced to abort their pregnancies, whether they wanted to or not; * The population at large could be sterilized by infertility drugs intentionally put into the nation's drinking water or in food; * Single mothers and teen mothers should have their babies seized from them against their will and given away to other couples to raise; * People who "contribute to social deterioration" (i.e. undesirables) "can be required by law to exercise reproductive responsibility" -- in other words, be compelled to have abortions or be sterilized. * A transnational "Planetary Regime" should assume control of the global economy and also dictate the most intimate details of Americans' lives -- using an armed international police force. Impossible, you say? That must be an exaggeration or a hoax. No one in their right mind would say such things. [...]

Published by Thriftbooks.com User , 12 years ago
To clarify, I gave this book 5-stars for the same reason other reviewers have; in order to keep your friends close and your enemies closer (as the saying goes). If you are unable to obtain a copy of the book, there are online copies that you'll surely find using google and google-scholar. I had to leave a pre-order in order to obtain mine! Once you glance through the chapters you see how a movie like "Children of Men", is far from fiction and much closer to the truth. The best thing I can recommend, is for everyone to do their own research; if you're willing to see how deep the rabbit-hole goes... "Those who love Me, love Life; those who hate Me, love Death." - Hebrew proverb

Published by Thriftbooks.com User , 12 years ago
Rated five stars for a must read in the pursuit to be informed and aware as to the enemy. I've confronted the eugenics movement firsthand so I'm naturally concerned. You would be too if you knew what they are trying to force onto you. Entropy is prevalent in all systems and in greater degrees without the addition of work to combat the chaos. The chaos being the greedy, malicious, domineering entity known as The New World Order.[...] "Posterity! You will never know how much it cost the present Generation to preserve your Freedom! I hope you will make good use of it. If you do not, I shall repent in Heaven, that I ever took half the Pains to preserve it." -- John Adams
Copyright © 2020 Thriftbooks.com Terms of Use | Privacy Policy | Do Not Sell My Personal Information | Accessibility Statement
ThriftBooks® and the ThriftBooks® logo are registered trademarks of Thrift Books Global, LLC