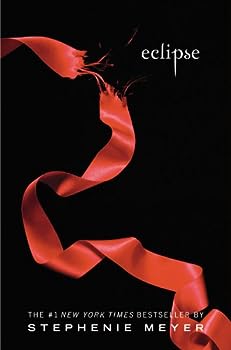 (Book #3 in the The Twilight Saga Series)

Readers captivated by Twilight and New Moon will eagerly devour the paperback edition Eclipse, the third book in Stephenie Meyer's riveting vampire love saga. As Seattle is ravaged by a string of... This description may be from another edition of this product.

Not In Very Good Condition

Published by Madeline , 3 months ago
The copy that I ordered said that it was in very good condition and the spine is ripped all along the side - I can pull the flap out and the cover feels like it’s gonna fall off. Disappointed. I get that I’m not buying a new book but don’t advertise that it’s in very good condition when it’s clearly not.

Published by Evana , 5 months ago
Love it. Perfect condition.

Published by Jo , 10 months ago
Growing up I’ve always loved the twilight franchise so I finally decided to give it a go and read the books , if you’re looking for a sign to get the entire book series this is it!

Published by Kaee , 1 year ago
I didnt order the french version. I ordered english. How does that happen??????

Published by Thriftbooks.com User , 13 years ago
This was my favorite book in the series, with Twilight as a close second. As a reader, you are really brought into the story and get to experience all of the confusion and angst as it happens. I loved the dialogue, how there was humor and commonality between the Edward and Jacob characters. It seemed very authentic to me. The story was crafted with care and the emotional impact of this book made if very difficult to put down. It was the perfect balance of emotion and suspense.

Published by Thriftbooks.com User , 14 years ago
This review is about the first chapter and preface of Breaking Dawn - sold in the special edition of Eclipse. Stephenie Meyer gives us a sneak peak into what looks to be another wonderful addition to the Twilight series. The preface is intriguing and makes us wonder who Bella is with while she is thinking such dark thoughts. Clearly, this is another book about obsession. The first chapter is awesome. We see Bella has matured and is walking toward her chosen path trying to keep her head held high. The first chapter was unexpected as well. What is great about the first chapter is that Bella is alone outside her house engaged in an activity. Bella hasn't been alone since the middle of New Moon so this was an interesting scene. This sneak peak also gave us the reactions of Charlie and Renee to Bella and Edward's news and through Bella's memories we see how Charlie reacted when Bella and Edward told him of their plans. Unexpectedly, we see a friendship has formed between Esme and Renee amidst all the planning and Seth and Edward have remained friendly. We also get a bit of information about what Jacob has been up to since receiving Edward's invitation at the end of Eclipse. For Jacob fans this might be upsetting. There is enough vagueness to make one think Jacob will have a pivotal role in the fourth book in the series and the last book from Bella's perspective. It is disappointing that the publisher won't allow the author to post these chapters to her website which is seemingly related to them trying to get teenagers and adults to purchase Eclipse a second time. This marketing ploy is a tad upsetting. These books have sold very well on the first round and to try and get people to buy the book a second time because "we" are obsessed with these characters is a bit over the top and it appears a bit unethical. Actually, the behavior of the publishing company is a bit predatory. Personally, I went to the book store and read the chapters there and I recommend you all do the same. Breaking Dawn will be out soon enough and why pay for the first chapter twice and Eclipse twice? I work hard to earn my money, don't you?

Published by Thriftbooks.com User , 14 years ago
I own all 3 books from the Twilight series and I LOVE THEM! I can't get enough. They were amazing and I couldn't put them down. I wish I was Bella because I would totally choose Edward! He's such a dream. The last book, Eclipse, leaves you wanting more. Such a great series I can't say enough about the books!

Published by Thriftbooks.com User , 14 years ago
Eclispse, the much anticipated (maybe by just me of course) sequel in the Twilight Saga, was worth the wait. The story picks up where the last one left off..Edward has returned to Forks, Washington to his true love, Bella Swan. Bella is close to graduating, and becoming the one thing that she desires...a vampire. Edward is struggling daily to make her reconsider her decision and keep her "humanity", believing that she should have the choice, which is one that he never did. Meanwhile, Jacob Black, Bella's best friend (who happens to be a werewolf) is struggling with his the knowledge that Bella wants to be a vampire, and that he is hopelessly in love with her. While all of these issues are at the forefront of the novel, there are other underlying problems like Bella's clumsiness; a secret society of vampires who want her to become immortal; a suspected serial killer, who may potentially be a newly turned vampire killing in Seattle; an old arch enemy whose sole desire is Bella's death; an uneasy alliance between the werewolves and the vampires; and Bella's pending acceptances to colleges. And finally what makes this novel so endearing and enjoyable is that underneath it all, there is a simple story of young love and sacrifice. In my opinion, what I found to be most compelling about the story is Meyer's ability to make Jacob Black appear to potentially be better for Bella than Edward! Of course, Edward has stated on more than one occassion that "Bella's happiness is the most important thing to him whether that means being with him or not", but for the first time I really started to consider what life would be if Bella was with Jacob instead of Edward? Afterall, she would not have to give up "anything", while becoming a vampire she would. Perhaps this love triangle was just what Meyer intended. When we were introduced to Jacob in the first book, it appeared that he would be in the same league as Mike, a character mentioned, but not critical to the storyline. However, when we were reintroduced to him in Book 2, and we saw him rescue Bella from heartbreak, we knew that he was a force to be reckoned with. Now he is such a strong character, that my heart simply went out to him in the final chapter, and I found myself liking him more than Edward. (It even made me think of Buffy, Spike and Angel...on some level, because in the end, you really weren't sure which guy is best, especially since they are so willing to sacrifice their happiness for hers). What I also like about Meyer's series is that although I am well in my 30's, I really enjoyed this well written and clean story. Although I read other paranormal romances, full of sex and violence, this is one that I could give a young reader and not feel bad about. There are definately undertones and hints eluding to sex, but it isn't so overwhelming in the story that it becomes the story (a la Laurell Hamilton), and nothing else. This is a story that even without the sex was good and enjoyable. I can

Eclipse Mentions in Our Blog