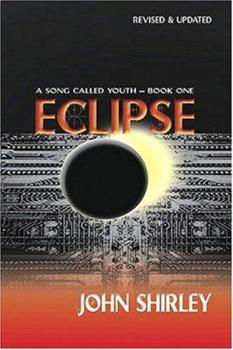 (Book #1 in the A Song Called Youth Series)

This description may be from another edition of this product. This gripping cyberpunk novel -- the first in a trilogy -- envisions a future in which the economy of the United States has crashed, while the Soviet Union not only remains intact but invades Western...

Published by Thriftbooks.com User , 19 years ago
After discovering John Shirley through his short horror fiction, I bought a copy of Eclipse and sat motionless for days to read it. In other words, I could not put it down. While this would be shelved in a store's science fiction section, it really is more than typical spaceships and lasergun fare. It falls more towards cyberpunk but exceeds it with a focus on characters instead of technology.The basic premise of the rise of a neo-fascist "security" corporation during the starts of a limited nuclear war between the USA and Russia sets the background for the very believable characters, each with distinct personalities and flaws that come to life from the printed page. Mr. Shirley weaves a complex and intertwined tale of guerilla mercenaries, fading rock stars, and fasicst powermongers that would stand proudly with the great works on science fiction. If not for any other reason, his interpretation of developing cultural trends is at the same time illuminating and frightening.Having only read the first book*, I am anticipating no less enjoyment from Penumbra and Corona, the second and third works in the series. I recommend this book to anyone that enjoys a complicated read where each page yields a small reward.* Sometimes I do need to spend a little time reading my college textbooks, too.

Published by Thriftbooks.com User , 20 years ago
World War III started but no one used the big nukes. While the USA and the New Soviets agreed to fight on European battlegrounds (and on a space station halfway between Earth and Moon), fascist fundamentalist Christian forces - under the name Second Alliance - are gaining in influence worldwide. Only the New Resistance sees the destructive power of the Fascists and starts a bitter and seemingly hopeless fight.As this is only the first part of the recently reissued trilogy, I don't know yet the outcome of the War, but one thing is for sure: John Shirley wrote one of the most intense future histories I have ever come across. The plot is based in the year 2029, and as this is a revised edition (the original version was released about 15 years ago), a lot of the historical background is real and does not only paint an imaginative dark future, but also shows the frightening doings of some actual American congressmen (Trent Lott and the racist Council of Conservative Citizens).Shirley apparently has a strong dislike for WASPs (understandably), and together with the malleability of people's minds, he paints us a visionary picture of the future that could happen only just too easily.Very graphic violence (nothing for the faint hearted), strong language and a shockingly surreal glimpse into the future will make sure that this book will have an everlasting imprint to your neurons.Only one small point of criticism: for a "revised and updated" version, there were awfully many typos and especially misplaced periods and commas, but that doesn't take away one ounce of the intensity of this groundbreaking novel.

Published by Thriftbooks.com User , 21 years ago
The song called Youth is played by Rick Rickenharp. This book is powerful. My message is simply to any sci-fan fan who was fortunate to stumble upon this book. READ IT. Just start and let Shirley do the rest.

Published by Thriftbooks.com User , 21 years ago
"...a multinational corporation for hire by those nations who require extra policing power, is gaining prominence in Europe as NATO and the new Russian war machine approach the hard battle line drawn at the former USSR's borders. SA steps into the vacuum and gradually, through a campaign of media propaganda, misinformation, infiltration, and ultimately coup, plans to impose a New World Order. But the idea is an old one. Pure Fascism. For the SA is nothing less than a Racist Army, and their CEO, an evangelical Christian Fundamentalist, envisions a world of "genetic purity...." "...a brilliant political writer/speechmaker with memories of torture, an American student caught behind the lines in Amsterdam, a video editor who's mind has been "robbed" by SA agents, a young "Admin" daughter of FirStep's chief designer, a driven ex-Mossad agent, a rock'n'roll classicist caught in the dangerous pull of a synthetic designer drug and a loyal corvid named Richard Pryor. They are a band of rebels called the New Resistance (NR), and everybody is looking for them." "_Eclipse_ does not know the meaning of "slow." The book is a mélange of poetic language, vibrant description, and vivid characterization. Considered a crucial work in the nascence of cyberpunk fiction, _Eclipse_ is among the very best Earth-based speculations in science fiction history."

Cyberpunk was built on this!

Published by Thriftbooks.com User , 22 years ago
I was a street punk the first time I read eclipse, and it changed my life. Smart and hard edged the eclipse series is the ultimate dark future tale, but does contain hope, and gritty realism!
Copyright © 2020 Thriftbooks.com Terms of Use | Privacy Policy | Do Not Sell My Personal Information | Accessibility Statement
ThriftBooks® and the ThriftBooks® logo are registered trademarks of Thrift Books Global, LLC