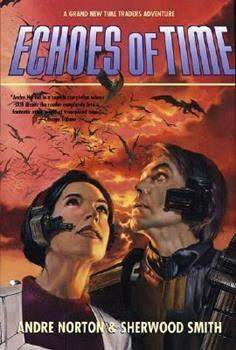 Echoes In Time (Trading for Time)

by Sherwood Smith and Andre Norton

Newly married Time Agents Ross Murdock and Eveleen Riorden, recalled from their honeymoon to track down a missing team of Russian scientists on a far-away planet, find themselves in a desperate battle for survival.

Published by Thriftbooks.com User , 18 years ago
For those who have read and enjoyed the early Time Trader books (The Time Traders, Galactic Derelict, The Defiant Agents, and Key Out of Time), this book will be an enjoyable extension, with just enough difference in emphasis to remind the reader that this is no longer Ms. Norton writing alone. After some (somewhat slow) preliminaries that help re-establish this series into a somewhat more modern time frame of post-Cold War, the story picks up the loose ends left by Galactic Derelict, with a new expedition to the final destination of that book. Although their ostensible mission is to find the missing members of an earlier Russian exploration team, the book quickly turns to unraveling the mystery of how and why all the current time denizens of the planet appear to be devolved representatives of earlier highly civilized species.The is the best aspect of this book, as in working out the mystery, there are some fascinating portrayals of multiple different species working within an overall society that may be the ultimate in enforced harmony. There is far more emphasis here on the real sciences of the cultural, anthropological, linguistic and biological variety than was present in the original books, and the basic plot provides for quite a bit of suspense and surprise, invigorating this tale with page-turning expectations. The mind-twisting consequences of time travel are reasonably worked out here, although without really answering the basic paradox inherent in time travel capabilities.What isn't quite as good is the basic characterizations, usually one of Norton's stronger points. Ross Murdock and Gordon Ashe don't quite seem to be the people they were in the earlier books, and most of the Russian contingent seem very sketchily drawn. Murdock's relationship with his new wife Eveleen seems very artificial. However, Saba, a new character for this book, is very competently drawn, and she pretty much carries the book. Stylistically, this book tends to more complex vocabulary and sentence structure than Ms. Norton normally uses, which I have to attribute to her collaborator. This added complexity seems to help add some muscle and a believable tone to the story.A competent tale and a worthy new entry to the Time Trader series, a series that helped establish Norton as one of the premier writers in the SF field long before women writers became fashionable. --- Reviewed by Patrick Shepherd (hyperpat)

Published by Thriftbooks.com User , 20 years ago
The glitz of the fifties from Norton, and the wonderful characterization and prose from Sherwood Smith. The pairing couldn't be better! I hope to see more from this team.

Published by Thriftbooks.com User , 21 years ago
I had misgivings about reading this, as most of these dual author things are a disappointment. The previous one, FIREHAND, was terrible! This author was a far better match with Ms. Norton. The world was fascinating, and the characters finally took on some dimension. As for the writing, it was a relief to get away from the embarrassing cliches of FIREHAND. The pacing was slow, because there was so much explaining about past stories, but once that was over, and they got to the planet, it really picked up speed. I will buy any other books by these two authors.

Published by Thriftbooks.com User , 22 years ago
I usually avoid these collaborations because I've found them so disappointing in the past, but I love Norton's work, and I recently discovered Sherwood Smith's work, so I gave this one a try. So glad I did! The aliens are fascinating, but even better, there are no obvious bad guys. Everyone has a real motivation, even the evil old Baldies! This is one collaboration that makes both writers look good.

Anything Norton writes is pure gold to me

Published by Thriftbooks.com User , 22 years ago
Time Agents Ross Murdoch and Eveleen Riorden are enjoying their honeymoon at the home of fellow agent Gordon Ashe in Safe Harbor, Maine when the emergency call came. The next day a helicopter arrives to take them back to the Project Star Center. When the newlyweds arrive at the home base, they are introduced to Colonel Zinaida Vasilyeva of the rival Russians. Zinaida explains that a scientific team jumped back in time on the planet Yilayil and vanished. A combined American-Russian team will be sent back to land one century past the date the Russian scientists leaped. Ross, Eveleen, Ashe, and the Russian are to learn what happened and whether the malevolent Baldies are involved in radically changing this planet. Andre Norton & Sherwood Smith continue to revive Ms. Norton's classic science fiction series. The duo successfully "modernized" the Solar Queen novels and now turns to the Time Traders books. ECHOES OF TIME is an entertaining tale that stays with the essence of the original series, but updates the Cold War rivalry into a more nineties perspective. Though needed, this technique slows the tale down a bit until the time travelers begin their journey into the past as the plot turns into a science fiction mystery. At that point in time, the novel turns into an exciting adventure that will electrify fans of the grandmaster Ms. Norton and have new readers search for some of the original tales.Harriet Klausner
Copyright © 2020 Thriftbooks.com Terms of Use | Privacy Policy | Do Not Sell My Personal Information | Accessibility Statement
ThriftBooks® and the ThriftBooks® logo are registered trademarks of Thrift Books Global, LLC