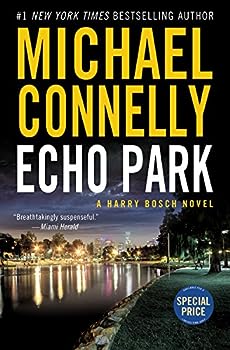 #1 BESTSELLING AUTHOR, #1 BESTSELLING SERIES In 1993 Marie Gesto disappeared after walking out of a supermarket. Harry Bosch worked the case but couldn't crack it, and the twenty-two-year-old was never found. Now, more than a decade later, with the Gesto file still on his desk, Bosch gets a call from the District Attorney. A man accused of two heinous murders is willing to come clean about several others, including the killing of Marie Gesto. Taking...

Ten Stars!!! (borrowed 5 from another book)

Published by Thriftbooks.com User , 14 years ago
True, I'm a fan. Michael is one of the best crime writers around (THE BEST - if you ask me, but you know what they say, don't always compare) Also he is much more than that. This is literature of the highest quality. Although I love all of Michael's books, this one stands out since it goes so deep. Not because it deals with a killer on the run, dirty politics, an unsolved murder case, the beloved hero-cop Harry Bosch. When Michael writes down his images, you are there with him, in the dirt, amidst the danger, but also - and most important, you get to share his humanity, Kiz' one second of shock/doubt to pull the trigger, which almost has her killed - Bosch's getting whacked by his superior officer, anything. I will even go as far as this: by showing us such intimate close-ups of his characters Michael reaches out to us, makes us think twice before we spit out our usual know-it-all judgements. That's what makes him special. And of course his style, edgy, journalistic. When Bosch is walking down the street, making love to his maybe girlfriend, trying to bring justice back onto the city streets and into politics, Michael is not painting a picture, he's changing our lives. TERRIFIC!!!

Harry Bosch remains one of the best cop characters in fiction

Published by Thriftbooks.com User , 15 years ago
Settling in with a new Harry Bosch book by Michael Connelly is like getting together with an old, close friend you haven't seen in a long while. Harry is still with LAPD's Open-Unsolved Unit along with his partner, Kiz Ridder. Returning to the police force after a short, unsatisfying retirement, Harry still looks at cases from long ago, cases that he had a hand in, but were never solved. One of these files concerns Marie Gesto, a 22 year old woman, who disappeared in 1993. Her car was found in an apartment garage, her clothes neatly folded and stacked on the front seat. The case has bothered Harry for 13 years, Now there's a break: Reynard Waits was stopped for a traffic violation in the Echo Park area. The officers spotted a plastic bag dripping blood and arrested him. The dismembered remains of two young women were stuffed in the bag. Reynard Waits, through his eminent criminal defense attorney, Maury Swann, has struck a deal with the fast-rising, ambitious prosecutor Rick O'Shea. Waits will lead officers to the body of Marie Gesto and seven other murder victims in return for life in prison instead of a death sentence. This doesn't sit well with Bosch, who is a smart, cynical, jaded cop out for justice. But Harry will follow orders. Taken to a remote site, Waits leads a police team to the burial place of Marie Gesto - and then escapes, killing two officers and wounding Kiz Ridder, Harry's partner. Now the real chase begins. Harry suspects a set-up. The prosecutor, who is running for District Attorney, is a prime suspect in Harry's mind, especially so when Harry learns that he has taken campaign contributions from one of the sleazier guys in town, a man whose son Harry had pegged for the Gesto murder more than a dozen years ago. Waits has kidnapped another woman and Harry is desperate to find him before he murders again. Along for the ride is Rachael Walling, an FBI agent who was once a criminal profiler. Things start getting sticky. It looks like Harry's partner - and Harry - missed a major clue in 1993 that might have led them to Waits before he murdered seven more women. But nothing feels right to Harry. There's something wrong. Much of the book is taken up with Harry's very intensive investigation of Waits who is more than meets the eye; the shifting suspicions of who is corrupt; Harry's relationship with Walling. There's not a dull page in this book, maybe not even a dull paragraph. Connelly keeps the action moving as Harry turns one rock over after another. To say more would give away too much of the story and I'm not about to do that. Heavy readers will be amused by Connelly's affectation of giving minor characters the names of other genre authors, like Duane Swierczynski, who has written an excellent noir thriller "The Wheelman". If you like police procedurals, you'll love Michael Connelly and Harry Bosch. If you simply enjoy good, suspenseful writing, you'll love them as well. Jerry

Published by Thriftbooks.com User , 15 years ago
If you're a true mystery/thriller fan Harry Bosch is a must. Along with George Pelacanos, Michael Connelly is at the top of the game. Steady plotting, great storylines, strong character background and pacing that never lets up. With this one I like the fact that Harry is back on the force. As a haunted, gifted detective he has all the requirements for a character you have to care about. Every cop has the one that got away and Harry is no different, but the way he suffers over his failures is part of the reason readers care so much about him, he is human, far from perfect but he cares about what he does, to an obsession. Read and enjoy, but avoid my mistake and take a few days to savor it, now that I've finished, I'm already anxious for the next.

The Lines We Will Cross

Published by Thriftbooks.com User , 15 years ago
Here's a book about feeding the dog, meaning that though each of us have competing desires and self-imposed limitations, we choose which part of our character to "feed", we draw the lines that we will refuse to cross. Mr. Connelly's finest creation, Detective Bosch, is one of those rare members of our society who are tasked with forming and testing assumptions regarding the limits of individuals. As we learn in short order in any mystery, you just never know what someone may be capable of--but Bosch does. Society has vested in Bosch the power to judge--not to convict or sentence, but to judge, a rather fine distinction. For this reason Connelly can set Bosch free; indeed, Bosch does much better work when he is unencumbered by rules, relationships and regulations. In Echo Park, we learn yet again that Bosch's judgment is not to be trifled with. More significantly, Bosch has become a much stronger character, more confident in his judgment and actions. Connelly writes a multi-dimensional mystery. There are always several things going on at once; indeed, some threads continue from book to book. In short, Connelly makes excellent use of the rich history upon which he can draw from the former volumes in the series. And, I noted that our author must have plenty of free time to scope out the local restaurants; he's grown weary of Phillipe's. Connelly remains at the top of his form and this work shows no hints of the slacking off that so often (and regrettably) takes place when the shelf holding an author's published works starts to creak under the weight. In this book we see how the power of choice makes all the difference--to say more risks spoiling a great read, but suffice it to say that we have the power to overcome any difficulty if we choose to do so. Or, we can choose to give in to our weaknesses and ruin everything. Connelly seems to me to be fascinated by our ability to act within a certain sphere--regardless of our perceived power, our actions always have so much more to say and so much more impact than we can imagine. This author's gift is to take simple but powerful themes and invest them with new life and meaning by way of particularly adept characterizations; his books are literally a character study. For example, by way of a minor cameo appearance we are again reassured that the Chief of Police is honorable and that the LAPD is under sound direction: Bosch is trying to sneak into an ER with the Chief's entourage, an annoying gate keeper tries to block Bosch by pointing out that he does not belong, however, the Chief shuts down the gatekeeper and renders support to his officers, including Bosch, in a very simple but satisfying exchange. Though but a cameo, you feel as if you know the Chief's character. That our author can do so much with so little highlights the complexity of his creation in the character of Bosch, of whom Mr. Connelly has had numerous volumes to develop. Very highly recommended.

Published by Thriftbooks.com User , 15 years ago
Over the past six months I have read nearly every Michael Connelly book with both my own personal attention to the study of the craft of writing, and for my overall amusement and entertainment. Echo Park is the first book that I have been waiting for from this distinguished author who has raised the literary bar for those writers who concentrate in the suspense/thriller genre'. In Echo Park, Michael Connelly delievers a terrific continuation of the Harry Bosch 'movement' with deliberate and flawless attention and consistancy to character development and plot line in juxtaposition to setting, thematic, and character profile. What is amazing in Connelly's writing of Bosch in this informative and clever novel is how the author brings the reader into the head and heart of the protagonist in such a way that the reader feels their own heart racing, hair standing straight up, pins dagging into your spin, as you too question if Bosch errored in ways regarding the investigation of a murder years earlier that perhaps somehow allowed for more innocent lives to be victemized by a serial killer. This is one of Connelly's best so far, and by far my favorite in the Harry Bosch series. What is clear is that Michael Connelly continues to wrap his hands magnificantly on the craft of storytelling, combining historical fact and 'truthisms' in the creation of the fiction world Harry Bosch navigates thru. Educational, pulsating, page-turning, Michael Connelly does a wonderful job bringing the reader to Echo Park.
Copyright © 2020 Thriftbooks.com Terms of Use | Privacy Policy | Do Not Sell My Personal Information | Accessibility Statement
ThriftBooks® and the ThriftBooks® logo are registered trademarks of Thrift Books Global, LLC