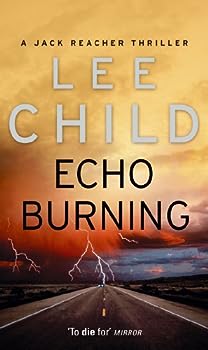 Jack Reacher finds trouble in Texas in the fifth novel in Lee Child's New York Times bestselling series. Thumbing across the scorched Texas desert, Jack Reacher has nowhere to go and all the time in... This description may be from another edition of this product.

Published by Korrie , 1 month ago
About 10 pages were ripped out of the book, and I bought 'GOOD' condition. Heck, even in 'Acceptable' I expect all the pages, perhaps with abundant writing in it.

Child at his best

Published by Thriftbooks.com User , 14 years ago
This one starts slowly, leading up to a firecracker of an ending, typical of Lee Child novels. Jack Reacher, the ex army police officer turned freelance lawman who never hesitates to stick his nose into private business, takes his lively act to Texas, embroiling himself in what starts as a messy domestic dispute before turning far more ominous. The rugged former army cop comes to the aid of a damsil in distress, who picks him up on the side of the road one morning outside Lubbock, then asks him to kill her abusive husband. She is beautiful but is worried her husband is getting out of prison in a few days, and Carmen fears he will start beating her again. Reacher declines, but agrees to protect Carmen, hiring on as a cowhand at the couple's remote ranch in Echo County, Tex., far outside Pecos. Within hours of Sloop's return from prison, where he was serving time for tax evasion, violence strikes. But the victim isn't Carmen; it's Sloop. He's found shot dead, and Carmen is arrested. End of story? Hardly. Most wandering heroes would move on at this point, but not Reacher. He begins taking a hard look at both Carmen and Sloop's past, as well as local history. What he finds ugly secrets, human suffering, political evil is repulsive to a man who's been around as many blocks as Reacher. Child (Running Blind; Tripwire) has developed a fine franchise with Reacher, who comes from the Robin Hood mold, but has enough personal quirks and moments of unusual insight to separate him from the pack. Set in a literally and figuratively smoldering landscape, this is a clean, infectious story that taps deeply into two troubling human emotions the psychology of abuse and the desire for retribution.

Lee Child is a genius

Published by Thriftbooks.com User , 14 years ago
Echo Burning is a great read. It is plausible and has many twists and turns that keeps the reader guessing. I couldn't figure out the outcome no matter how hard I tried. Another phenomenal book in the Reacher series.

Published by Thriftbooks.com User , 20 years ago
Each generation, I suppose, has its favorite fictional Tough Guys. For my parents, it may have been Bogart and The Duke. For me, they've been Clint, Bruce, and Mel on the Big Screen, and the literary British spy Quiller. However, in the past couple of years, Jack Reacher has arrived on the killing fields. And he's perhaps tougher, certainly smarter, than any who've gone before. A former Army major assigned to the Military Police, Jack has been aimlessly roaming the United States through several novels, and attracting big trouble in each one. In ECHO BURNING, he's hitchhiked into sunburnt West Texas where he's given a ride by Carmen Greer, who's cruising the highways on the lookout for a Tough Guy. Carmen lives with her young daughter, Ellie, on an arid ranch with her hateful brother-in-law and mother-in-law while her husband, Sloop, serves time in a federal pen for tax evasion. According to the story Carmen spins, her spouse had been viciously beating her for years. Since Sloop is due to be released in forty-eight hours, Carmen expects the beatings to begin anew, especially since she was the one that ratted on Sloop to the IRS. Will Reacher kill him for her? No? Well, will he at least teach her how to shoot the dainty pistol she's purchased? (In the meantime, what's with that team of three professional assassins circling the ranch unbeknownst to all? Jack may discover his hands full.)All those other Tough Guys I mentioned are smart, but not so much that they don't sporadically get beaten up and kicked silly by the Bad Guys. But not Reacher - nobody gets the drop on him. When the reader sees a violent confrontation looming, he almost feels sorry for the villains for the World of Hurt in which they'll soon find themselves. By his own admission, Jack's a hard man who likes cockroaches better than the men (and women) he's sometimes forced to exterminate.Reacher is endlessly fascinating. Having gone from one Army post to another, first as an Army brat and then on his own as an MP officer, he's never known a permanent home. So, now he chooses to live as a near-vagrant, shunning commitment to material things and the occasional interesting woman. He travels only with testosterone and a toothbrush, buying cheap clothes to wear and discard as he goes. He's educated, intelligent and gentlemanly, but excruciatingly asocial (as opposed to antisocial, which he's not) and heroically ignorant about how a "normal" life - wife, house, mortgage, kids, dog, 9 to 5, and Lexus - is lived. This is a man whom all you single ladies out there would love the chance to improve. (Don't cave, Jack! Be a role model for the rest of us New Age men pining to be free!)Hey, all you other Tough Guys of lore and legend, move aside and make room for a Real Man.
Trustpilot
Copyright © 2022 Thriftbooks.com Terms of Use | Privacy Policy | Do Not Sell or Share My Personal Information | Accessibility Statement
ThriftBooks® and the ThriftBooks® logo are registered trademarks of Thrift Books Global, LLC