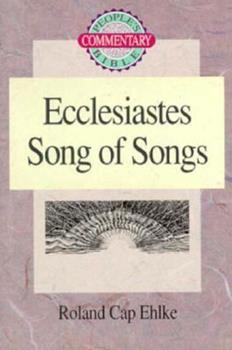 This series weaves together the New International Version of the Bible with in-depth commentary to enrich your understanding of the Bible.

Perfect for the lay Christian

Published by Thriftbooks.com User , 15 years ago
Roland Cap Ehlke is an ordained minister in the Wisconsin Evangelical Lutheran Church (WELS) and authors this volume in the People's Bible Commentary Series. The series is not intended for pastors, but is rather aimed toward lay people who want to know more about the various books of the Bible, but do not have the educational background to tackle some of the theologically thicker books on their pastor's bookshelf. To that end, the books in this Series strive to offer the lay reader what he is looking for. Specifically, the books in this series intend to 1) offer the historical/cultural background of the text, 2) explain what difficult texts actually mean, 3) give life applications, and 4) show the centrality of Jesus in all of the Scriptures--both Old and New Testament. These books are written from a Lutheran background and thus assume the inerrancy of Scripture. Ehlke's contribution to this series is an excellent one as Ecclesiastes and (especially) Song of Songs are difficult texts to make sense of let alone apply them to your life or find the Christ-centered message within. The author rises to the challenge presented by these Biblical books and achieves the aims of the Commentary Series. Arguing for Solomon's authorship throughout, Ehlke provides helpful historical and cultural background. His knowledge of the Ancient Near East geography, customs, and culture (including the widespread use of Aramaic during Solomon's time) made the Biblical text more accessible. He also does an admirable job in explaining what the text actually means. This is so for Ecclesiastes where Ehlke points out the twofold division of the book and the competing worldviews they represent (chapters 1-6 and 7-10) and where he points the reader toward clues concerning which worldview he is speaking from (e.g. "under the sun" indicates a world-centered, faithless standpoint). This is even more true of Song of Songs, where Ehlke eloquently demonstrates that the Song is a series of love-poems between great King Solomon and a simple peasant-girl. Moreover the Song is a unified whole, taking the reader through courtship, to marriage, to a period of stagnation in their love, to a renewed feeling of love for one another. While the Song of Songs employs many idioms and figures of speech that quite simply baffle the modern Western reader, Ehlke (seemingly) effortlessly explains the idiom/metaphor/etc. and incorporates it into the unified whole of the book. Ehlke also fulfills the goal of the series by applying Ecclesiastes and Song of Songs to the life of the Christian reader. As wisdom literature, it is not difficult for one to point out life lessons, and Ehlke finds no shortage of sage advice to highlight for the reader. He successfully shows how Ecclesiastes is Solomon's autobiographical experience: that he attempted to find meaning in life without God (through pleasure, accomplishments, worldly wisdom, etc.) yet fell into despair at the prospect of meaningless
Trustpilot
Copyright © 2022 Thriftbooks.com Terms of Use | Privacy Policy | Do Not Sell My Personal Information | Accessibility Statement
ThriftBooks® and the ThriftBooks® logo are registered trademarks of Thrift Books Global, LLC