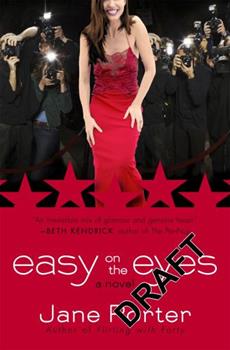 Easy on the Eyes

(Book #3 in the Bellevue Wives Series)

From New York Times bestselling author of Odd Mom Out and Flirting with Forty comes the story of a woman coping with loss and learning to love herself-and rediscovering love in the process. At 38, Tiana Tomlinson has made it. America adores her as one of the anchors of "America Tonight," a top-rated nightly entertainment and news program. But even with the trappings that come with her elite lifestyle, she feels empty. Tiana desperately misses her...

Published by Thriftbooks.com User , 12 years ago
"Easy on the eyes" by Jane Porter is a wonderful book about trusting in yourself and going your own way. Tiana Tomlinson, a famous and beautiful TV anchor of America Tonight in her thirties, seems to have the perfect life. But when her bosses tell her that she is too old to get high ratings her life is about to change dramatically. She is shocked to realize that there are already plans for a younger woman to take her place and that the only thing she could do to change it is having a face lift. Her whole life is in chaos and she is fighting to not feel inadequate, old and lacking. Especially because her work has helped her to overcome her beloved husbands death years ago Tiana is scared to death to loose her job and part of her identity. But soon she decides that it's time to gain back control over her life. Tiana is no longer willing to sell herself short and makes plans to change her life in a way that will make her happier and more satisfied. She also decides against a face lift because she likes her face just the way it is and doesn't want to join the race for eternal youth. Even against vehement resistance she changes her format from only talking about stars and their scandals to more serious themes. Besides her friends Marta, Shey and Christie it's suprisingly Hollywoods favourite beauty surgeon Michael O'Sullivan who joins her on this journey, helps her to achieve a project dear to her and who is there for support in her darkest hour. What I love most about "Easy on the eyes" is that Tiana becomes such a strong woman who decides to go her own way and doesn't comply to the pressure to stay young forever. It's so beautiful to read how she starts loving herself and her looks again and how she gains so much power by doing so. Especially because so many woman struggle to feel worthy and to love themselves it's great to see (and also really inspiring) how Tiana manages it. Michael is another fantastic character and the perfect match for Tiana. The way their relationship changes from being mere acquaintances to life partners is wonderful. I also loved reading more about Marta (from "Odd mom out" - another great book) and about Shey who goes through some painful changes in her life (her book will be out in 2010). Every girl deserves such terrific and honest friends. Jane Porter has become one of my favourite authors because of the way she combines romance with more serious issues (feeling unworthy, lack of self-confidence and running after the perfect youthful look) that so many woman suffer from. She has the ability to create heroines who's stories are always beautiful, a lot of fun and also inspiring. So, if you are a romance reader who loves strong heroines and are in the mood to be inspired you should definitely get "Easy on the eyes."

Published by Thriftbooks.com User , 12 years ago
EASY ON THE EYES - NOT SO EASY ON THE HEART Tiana Tomlinson has everything going for her. She's got brains, beaus, plus she's beautiful; adored by America as an anchor for a top rated entertainment news program. It's everything a woman could wish for ... that is, until the network decides Tiana DOESN'T have everything going for her. Such as her age. Or her face. A face that's before the cameras every night, and beginning to show some wrinkles. When the producers suggest Tiana consider plastic surgery, as well as inform her that a younger-co-hostess is being brought in to "assist", Tiana's forced to take a long hard look at the realities of the un-glamorous "business-side" of Hollywood and figure out what's really important in life. Her face? (which she desperately wants to keep) or her heart (which she's afraid of losing to a certain Hollywood plastic surgeon). For Tiana's a widow of seven years, and she knows that while hearts eventually heal, they still bear scars. As we've come to expect from any work of Jane Porter, she does an excellent job of leading us through the emotional journey of a woman's decision to come to grips with her past, present and future. Ms. Porter's latest story aches with vulnerability, but her fans will definitely not be disappointed. EASY ON THE EYES is a fascinating glimpse into the ugly side of Hollywood, of celebrities, of plastic surgery, interspersed with haunting images from Africa where women are fighting for their very lives, and for their children's lives. Tiana's story challenges every single woman who puts on make-up every morning. What is that make-up really hiding? Can we embrace charity in our hearts, while we embrace the wrinkles on our faces? EASY ON THE EYES isn't an easy read, because it lays your heart (and Tiana's) wide open. But from Jane Porter, we wouldn't expect any less, and we're willing to follow wherever she leads. Bravo, Ms. Porter. Thank you for challenging us as women to examine who we really are, and most importantly, what kind of difference we can make in the world. -Kathleen Irene Paterka

Published by Thriftbooks.com User , 12 years ago
[...] There are many books on the market dealing with the aging process. No where is it more prominent than in Jane Porter's latest book, EASY ON THE EYES. As main character, Tiana Tomlinson discovers, thirty-eight is old in the entertainment industry even if you still look great. Tiana's job is jeopardized when the powers-that-be of entertainment news program, America Tonight, insist on adding a co-anchor to HER show. Stating that they need a fresh, new look and energy added to her show, Tiana considers having plastic surgery to maintain her single anchor status even though the surgery is something she fears and does not desire. After losing her husband, Keith, after only one year of marriage, Tiana has placed all her energy into the one thing that she feels is hers, America Tonight. After the execs of the show insist she add a co-anchor she decides to take a break and travel to a depressed country to film a human interest story. Although she knows Dr. Michael Sullivan, otherwise referred to as Dr. Hollywood, she finds he offers more than the eye can see. He volunteers for an organization that helps people of poverty level with their medical needs and during the filming of his journey; Tiana is impressed by his ability to quiet the fears of parents whose children he helps. A relationship develops between Tiana and Dr. Sullivan but to what extent they will take the relationship is still uncertain. The ending of this book is both surprising and heartfelt. A good summer or winter read, Porter provides a bang for the buck.

Jane Porter knows that real beauty isn't simple, until you realize it is...

Published by Thriftbooks.com User , 12 years ago
Jane Porter is a pro at creating strong characters, strong women, who deal with real life issues. Easy on the Eyes draws you in with Hollywood and glamour, then takes you on the path to what matters with a very classy heroine. Thought provoking and well-paced, it is a fun read that I couldn't put down until the end!

Another story that will stick with you from Jane!

Published by Thriftbooks.com User , 12 years ago
I have been looking forward to this book for several months now, and it was worth the wait! Tiana Tomlinson has it all. She's gorgeous. She's still fairly young. She appears in millions of homes nightly as the hostess of "America Tonight", an entertaiment and human-interest news program. The one thing she wishes she had, though, eludes her: Someone to come home to. As a result, Tiana's career is the most important relationship in her life. When Tiana discovers the network wants to replace her with a younger model, every fear she has is made reality. If her career is gone, what does she really have? When she's not worrying about this, she's confronted with Michael O'Sullivan, the bane of her existence. Michael's a gifted plastic surgeon. He'd like to solve all of Tiana's problems. She wishes he'd find something (or someone) else to do. While Tiana discovers that her career and her life are in desperate need of a makeover, Michael finds there is so much more to Tiana than a beautiful face. You'll keep turning the pages to find out what happens to this intriguing, complex woman! As always, Jane's written characters that leap off the page and lodge in your heart, a book you won't be able to put down, and a story that will stick with you long after you've finished reading. You'll love "Easy on the Eyes"!
Copyright © 2020 Thriftbooks.com Terms of Use | Privacy Policy | Do Not Sell My Personal Information | Accessibility Statement
ThriftBooks® and the ThriftBooks® logo are registered trademarks of Thrift Books Global, LLC