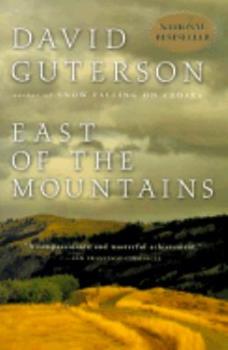 East of the Mountains

Ben Givens is a retired heart surgeon who has been diagnosed with terminal cancer. Deciding to take charge of his own demise, Ben travels into the wild country of Washington state with his two dogs and his father's Winchester, to hunt one last time and then to end his life on his own terms. But, as with all quests, the Fates intervene. A car wreck introduces him to various helpers and hindrances, and gradually Ben undertakes a journey back through...

Published by Thriftbooks.com User , 17 years ago
As a native Northwesterner, I am always suspicious about books written about this region. So many writers don't get it right, but five a quick gloss to Puget Sount, toss in a little Mt. Rainier and rhapsodize at entirely too much lengh about the San Juan Islands. But Guterson's got the sense of place just right. The book opens with an aging and terminally ill Seattle physician's decision to return to the scene of his youth and end his life. I found myself gasping with recognition in Guterson's account of the surprisingly long and difficult journey over Snoqualmie Pass to Eastern Washington. The landscape sings such a familiar song through Guterson's words. His protagonist initially displays the contained stoicism so typical of the region's Scandinavian-American residents. And like them, he rises to complex challenges, spilling forth his humanity at every turn. The protagonist's achingly difficult night on the Columbia plateau was so real that it was painful to read. The doctor has to be one of the best fictional characters I've encountered in a long time. In fact, he is so skillfully drawn that I find myself unable to decide whether Guterson's greater gift is for evoking character or landcape. In any case, this is defintely a five-star book.

Published by Thriftbooks.com User , 18 years ago
I was utterly shocked when I saw that this book had only earned 3 stars (at the time of this review). It is hands down one of the best books I have ever read. My wife and I were about 2 weeks from relocating to the area where the book is set so that may have played a role in my enjoyment of the book The travels of the protagonist lead him, and the reader, to consider life and death. I gave this book away after I read it only to go and buy another copy for myself. I will read it again and again.

A wonderful book about life and compassion

Published by Thriftbooks.com User , 19 years ago
This is an excellent novel about a seventy-three year old widower who decides to take his life after learning he has terminal colon cancer to spare himself and his family the painful experience that is sure to come over the next few months. A retired surgeon, he plans to stage a gunshot accident while hunting for birds in the Yakima Valley which is "east of the mountains" from Seattle where he lives. He spends three days in the valley where he grew up as a boy during which he confronts other issues about life and death and reflects on some of the important events in his life while growing up. This is a thoughtful novel that speaks volumes regarding the value of life and how individuals affect the lives of others. It is interesting to see how other people have reacted to this book in light of the success of "Snow Falling on Cedars." Second novels tend to be judged harshly, especially when people have expectations that the next book will somehow be the same as or a continuation of the first. "East of the Mountains" has a different premise and explores different issues than "Snow Falling on Cedars." Instead of dealing with issues of cultural expectations and community values, "East of the Mountains" is about personal fulfillment and the value of life. Ironically, despite the pallor of loss, it ultimately expresses more about hope than "Snow Falling on Cedars." Readers who can accept this book as its own work will find it to be a profound and carefully crafted story.

An elegy for facing our mortality

Published by Thriftbooks.com User , 22 years ago
Like so many others, I bought this novel because of my captivation with "Snow Falling On Cedars", but delayed reading it when the air became filled with negative responses. There is a lesson here: if you relate to an author's way with a story, stay with him. Ben Givens, while a carefully drawn character in this novel, is really the creature that represents the spectre of mortality. By gradually letting us get to know this crusty old retired surgeon, revealing the pain of his loneliness, the agonies of his youthful experiences in war, his growing into the choice of Medicine, his lingering regrets for the tragedies of life that haunt him and make him choose to terminate his own cancer ridden body rather than burden his family with his dying...all these elements the author merges into a hero of compassionate understated nature. Guterson can describe a countryside, natural and unnatural vistas, draw passing characters with such clarity that we hate to see them depart at a chapter's end. But finish this book in an evening or two and you are rewarded with an understanding of why we exist on a planet populated with our own brethren. After starting to read this book I thought about not finishing it: it didn't have near the atmosphere or universality of "Snow..". But thankfully I trusted the author and I grew into his far more personal journey. There is much food for pondering in this tender book.

East of the Mountains

Published by Thriftbooks.com User , 23 years ago
When I started this book, I fell in love with it just like I did when I started reading 'Snow Falling on Cedars'. David Guterson has a way of using words, to pull the reader into the book, and he did it again with 'East of the Mountains'. Ben, (the main character) learns that he has terminal cancer, he decides to not tell his family about it and decides to take his own life so he can see his wife again. As he leaves to take what he thought was going to be his final trip, he gets in a car accident and strikes out on a trip, where he remembers his past, present problems and the type of future he was going to be leaving for his daughter and her family. I haven't finished the book yet, but when I do, I know that I will still smell the apple fields and feel his pain everytime he does.
Trustpilot
Copyright © 2022 Thriftbooks.com Terms of Use | Privacy Policy | Do Not Sell My Personal Information | Cookie Preferences | Accessibility Statement
ThriftBooks® and the ThriftBooks® logo are registered trademarks of Thrift Books Global, LLC