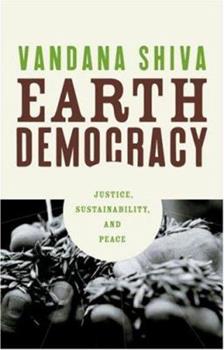 World-renowned physicist and activist Vandana Shiva boldly confronts the neoconservative Project for the New American Century with her own plan, describing what Earth democracy could look like, and outlining the bedrock principles for building living economies, living cultures, and living democracies.

a call to sanity

Published by Thriftbooks.com User , 12 years ago
A friend of mine told me she was reduced to tears when she heard Vandana Shiva speak. The hopefulness and common sense that she displays in this and her other books is an antidote to the cynicism and political expediency that has created a global economic, environmental and military crisis that threatens our very existence as a species. She makes the argument that a strong, humane agrarian policy is the basis of any healthy society, and that our current model of globalization is not only crushing the life out of the majority of humanity but is not sustainable from any reasonable economic or environmental perspective. Her call for a humane restructuring of society and sustainable development that respects all human beings, animals, and the natural world is a call to sanity!

Published by Thriftbooks.com User , 13 years ago
Vandana Shiva believes that peasants should be able to make a living based on access to land, rivers, forests and oceans and that governments must protect the health of these commons for the good of all. This makes her a radical. She also makes complete sense and answers many of my questions about the inequity of the poor. Much of this book is a discussion of the commons and the enclosure laws in England in the 16th century that allowed the commons to be privatized. Critics of Vandana Shiva claim that she is asking for a return to feudalism, but they are not hearing her out. (And besides feudalism guaranteed that the peasants would eat, while privatization guarantees that those without money will starve while taking away access to the land that originally provided them with a livelihood.) Much of the battle of the enclosure laws is waged with words. By claiming that an area of land is a wasteland and is not being used by anyone, this somehow gives private companies the right to buy the land or contract to use it for development purposes. She ferrets out the flaws in the arguments of the opposition ie Richard Epstein in his book "Takings--Private Property and the Power of Eminent Domain". Their position is that government cannot protect natural resources like beaches, streams and other property because it would be a "taking" and therefore the owners must be compensated. This argument, she says, ignores the original taking of these public lands during colonialism, but it also confuses public trust with eminent domain which is virtually the opposite. And finally the public is redefined as a collection of individuals thus the loss of property is calculated based on its higher value to one individual vs each member of the public. Here she has not only explained how things have changed, but what kinds of arguments have influenced far reaching policies and how we have been manipulated into buying into the ideology of privatization over public interests. This is an important concept because it is a cultural battle of words that over time has eliminated the very notion of a public trust. If it were not still going on, this book would just be a historical treatise, but with water rights and clean air and the earth's atmosphere at stake, her arguments serve as the ground floor of resistance. She also debunks the argument that having a commons doesn't work because everyone will abuse it. Not so, she says, as long as everyone can subsist off the land and be self-reliant, the community will work together to insure that no one party takes advantage. Assumptions are being made by free market advocates that have messed with our minds, but her examples show a different picture. She points out the correlation between lack of economic security and the monoculture of globalization leading to an increase in fundamentalism both here and abroad. When people no longer have a livelihood to identify with, they are attracted to religion and will vote for issues rela

Published by Thriftbooks.com User , 15 years ago
Shiva is a kind of Mama Kali, defending her village farmers and their environments with cool resolve or fact-spitting outrage. Coming off a series of victories over corporate bio-pirates, she shares the state of struggle for the local nature-workers of India to manage their future. Here are a few of her lines: "What has been called the tragedy of the commons is, in fact, the tragedy of privatization." (p. 55) "The enclosure of biodiversity and knowledge is the latest step in a series of enclosures that began with the rise of colonialism. Land and forests were the first resources to be enclosed and converted from commons to commodities. Later, water resources were enclosed through dams, groundwater mining, and privatization schemes. Now it is the turn of biodiversity and knowledge to be "enclosed" through intellectual property rights (IPRs)." (p. 39) [In the Navdanya movement] "More than 200,000 farmers are working to enrich the earth, create properity for rural producers, and provide quality food to consumers. ... [Their work] reintroduces biodiverse farming to both replace chemicals as fertilizers and pesticides and to increase the productivity and nutritional value of crops. ... Navdanya farmers are able to reduce their expenses by the 90 percent that was used to buy chemicals and create corporate profits. ... The incomes of Navdanya farmers are three times higher than the incomes of chemical farmers..." (pp. 67-68) "Ecological security is our most basic security; ecological identities are our most fundamental identity. We ARE the food we eat, the water we drink, the air we breathe. And reclaiming democratic control over our food and water and our ecological survival is the necessary project for our freedom." (p. 5)

Organic food is a human right!

Published by Thriftbooks.com User , 15 years ago
In "Earth Democracy", Indian ecofeminist Vandana Shiva powerfully defends the rights of Third World farmers against agribusiness monopolies, biotechnology and international financial institutions like the WTO, World Bank and IMF. In a brilliant deconstruction of capitalist patriarchy, Shiva explains how market fundamentalism breeds religious fundamentalism and explores the many ways that corporate globalization negatively impacts the lives of low-income women around the world. Importantly, Shiva explains how the colonization of DNA by multinational corporations is an extension of the colonization of Asia, Africa and the Americas by an imperialist male white elite. Outlining how the preservation of seed, water and sustainable food systems are a prerequisite for peace and real security, "Earth Democracy" is a timely and informative read for global justice activists interested in alleviating world hunger, healing the environment and creating peace.

A more peaceful and secure future

Published by Thriftbooks.com User , 15 years ago
"Earth Democracy" by Vandana Shiva offers both a masterful critique of globalization and a hopeful vision for a better world. Ms. Shiva compares and contrasts top-down systems of authoritarianism and exclusion with bottom-up systems of egalitarianism and mutual cooperation to discuss how corporate power is proving to be a grave threat to democracy and the long-term viability of the planet. Ms. Shiva contends that a mutually-supportive network of empowered local communities might be able to create a global society that is based on humanitarian principles of peace, compassion and solidarity. Ms. Shiva has long been highly regarded as an activist and scholar. She has authored many books and is a frequent media commentator. "Earth Democracy" serves to further Ms. Shiva's stature as a leading intellectual who continues to eloquently voice the concerns of the poor. Her unique ability to blend science, history, politics, economics, gender issues and other fields of study into her text is impressive. The result is a book that rewards its readers with many pages of thought-provoking insight and analysis. Ms. Shiva points out that two thirds of humanity owes its livelihood to a sustenance economy that finds itself under increasing pressure from capital. She finds similarities in the earlier eras of enclosure and colonialism with today's struggle over intellectual property rights and patents, where the powerful use the law to privatize resources for profit. Arguing that overconsumption by the wealthy is the root cause of environmental destruction and human injustice, Ms. Shiva makes a compelling case for granting local communities more control over resources so that alternative, sustainable economies can be nurtured. Ms. Shiva brilliantly connects the insecurity wrought by globalization with the "ideologies of exclusion" and "cultural nationalism" that fuels war and terrorism. As state power largely serves to protect corporate interests, the economically uprooted and excluded masses seek identity through nationalist conflict and sometimes prove vulnerable to manipulation by religious extremists. On the other hand, Ms. Shiva cites the Indian farmer's struggles over seed and water rights as examples of how people might come together in a positive way to reclaim a more peaceful and secure future. Ms. Shiva reminds us that Mahatma Gandhi proved how small acts of resistance can hasten the end of empire. She believes that a multiplicity of movements such as Terra Madre that are struggling for food security, the environment, democracy and human rights will help us break free from the self-destructive path that has been prescribed for us by the corporate elite. I highly recommend this important and inspiring book to everyone.

Earth Democracy: Justice, Sustainability, and Peace Mentions in Our Blog 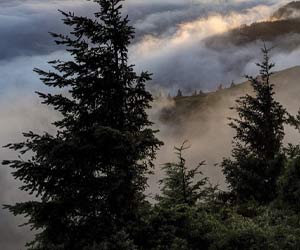