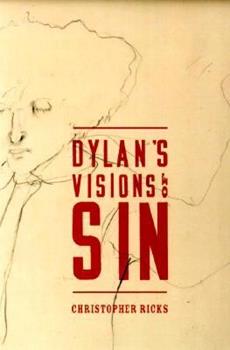 Bob Dylan's ways with words are a wonder, matched as they are with his music and verified by those voices of his. In response to the whole range of Dylan early and late (his songs of social conscience, of earthly love, of divine love, and of contemplation), this critical appreciation listens to Dylan's attentive genius, alive in the very words and their rewards. "Fools they made a mock of sin." Dylan's is an art in which sins are laid bare (and resisted),...

Published by Thriftbooks.com User , 13 years ago
Dylan is a serious literary genius. Ricks views Dylan's lyrics (and songs...Ricks makes the point that songs differ from poetry in that songs are poetry, music AND performance, a factor that often plays in Ricks analysis) through the lens of the seven deadly sings, four cardinal virtues and three heavenly graces. Ricks is a serious literary critic and approaches Dylan as such. Ricks also loves Dylan's wordplay and plays with words in his analysis much as Dylan does. Pay attention--Ricks' vocabulary and grammar reflects and refracts fragments of Dylan's at almost every turn.

A close read of Bob Dylan

Published by Thriftbooks.com User , 14 years ago
"Dylan's Visions of Sin" by Christopher Ricks is a thick tome of 500 words. OK so "Sin" on the title page was attractive. So was the author's pedigree: he was the editor of the "Oxford Book of English Verse" a book I have owned since university and a professor at Oxford University. People steal my OBEV and I buy another. He has also written on some of my fave poets like T S Elliot, Keats, Tennyson, and A E Houseman. Why is he writing about Bob Dylan? Let's get past the canard that you like his songs but he can't sing, or you like his singing but his looks stink, or he isn't a poet, etc. ad nauseum. Bob Dylan is the single most influential singer/songwriter to hit this planet ever. He copied everyone before him and added to it his own genius. What kind of a genius steals from the Bible, Shakespeare, Milton and TS Elliot with impunity? Without Dylan there would be no Bruce Springsteen (a pale imitation), John Prine, Neil Young, no anybody who is doing what music is about today - relevant songs that the singer wrote himself. When I listen to his progeny it's painfully clear they think Dylan authorized guitar accompanied introspection. Most of their lyrics are mundane, prosaic, and forgettable. He has written 500 plus songs over 5 decades many of which define how we have felt along the way. If you want to see an artist in the middle of self-recreation, check out one of his concerts. It's like Picasso re-painting his paintings over and over. OK so what about the book? Ricks is a proponent of the "close reading" of poetry. How close? Very close - you will go on wonderful trips where he compares "Not Dark Yet" from "Time Out of Mind" to Keats' "Ode to a Nightingale" line for line. After you digest that he points out how Keats was inspired by Shakespeare's "Sonnet 73." I would love to have his grasp of poetry and literature for he also brings in Becket and others. Word for word, line by line he draws out the beauty and significance of Dylan's work. The popular press and pundits are constantly judging Dylan: such is the lot of an artist. It reminds me of the people who critiqued Van Gogh (too much yellow and blue) or Gauguin (who are those naked natives). You can tell Ricks is impressed by Dylan during every period of his artistic career. Ricks makes you appreciate Dylan, even in his missteps, as the great artist he is. This book is not an easy read. I guarantee if you like poetry, are a poet, or songwriter it will make interest you. My songwriting has improved from a single read. I've got to read it, no study it song by song, instead of trying read to get to the end. There are other scholarly books on Bob Dylan: this one is my favourite for its emphasis of poetry and song structure independent of the music. Next: "Song and Dance Man" by Michael Gray.

Essential for fans of Dylan as poet

Published by Thriftbooks.com User , 15 years ago
****1/2* This book forms a kind of other bookend for Greil Marcus's matchless "Invisible Republic". That deeply perceptive study placed Dylan's work in the myth and paradox laden context of American folk and country and blues, especially its most obscure corners. This one looks at its literary context, noting echoes of Blake and Keats and the rest. And most of those echoes are really there. Better yet, it examines Dylan's entire body of work as poetry. And it does that out of the most worthwhile tradition of poetic criticism, the "close reading" of Helen Vendler and others. What close readings do is to take each poem entirely on its own internal terms, without getting bogged down in biography and gossip and the psychosocial picking-apart of presumed ideologies which constitutes the Higher Gossip of much of academe. It looks at the poem line by line, word by word, asks how the words and images connect to other words and images within the same work, why the poet made the choices (s)he made, and by what technical means the poem acheives its effects on the reader. That may sound dry, but it's the liveliest way of approaching a poem, because it assumes the poem is alive in its own right, and doesn't need extraneous issues dragged into it to bring it to life. In this spirit, Ricks examines songs from every stage of Dylan's career, always assuming the songwriter, consciously or by instinct, knew what he was doing. Ricks has a habit of free-associating on particular snippets from the songs, in pyrotechnic wordplay aimed at divining what Dylan's own associations may have or must have been. It's annoying, but it also seems to be inseparable from his method of taking a loose step back from the lyrics in order to find tight connections that really do lie in their heart. The results are worth that cost. The method foreordains that he will find genius in every piece he looks at, so that he seems to give the same weight to minor works like "If Not For You" and the whole Slow Train Coming period as he gives to the masterpieces. That's okay; much of the minor work deserved some of that rehabilitation. When it comes to the big stuff, his insights are deep and dead on. You'll never listen to "Lonesome Death of Hattie Carroll" again without being aware of how Bob used feminine half-rhymes to create its sense of sober understatement, nor fail to hear in "Lay Down Your Weary Tune" its yearning for humility as a refuge. After the songs themselves, Marcus, Chronicles Volume I, and Scorsese's "No Direction Home" are the core necessities for the Zimmerman collection. Ricks is a good bet for the next acquisition after those.

Published by Thriftbooks.com User , 15 years ago
Do not get this book if you want to read about Bob Dylan the musician. DO get this book if you love ananlyzing literature and want to read literary criticism by one of the best, Christopher Ricks. His analysis of Dylan's lyrics is witty and insightful. It really is very funny at times but is definately grounded in his expertise of analyzing poetry. It is amazing to see how varied Dylan's influences are (from the Bible and the book of virtues to nursery rhymes and wallace stevens...) I enjoyed it tremendously but admit it's not for everyone.

Take what you have gathered from coincidence ...

Published by Thriftbooks.com User , 17 years ago
You'll be a little jealous, of course, wishing you had the literary storehouse of information and insight that Christopher Ricks has at his disposal from which to gather literary parallels, borrowings, and coincidences. I have never been more impressed by ANY book of criticism written about a modern writer or musician. To be honest, I have not yet finished "Dylan's Visions of Sin," but I couldn't wait to comment here after reading the detailed comparison of "Not Dark Yet" and Ode to a Nightingale (yes, KEATS' Ode to a Nightingale) on pages 359-374. Sound ridiculous? It won't after you've spent the first 350 pages getting to this tour de force reading of a deceptively simple song from Time Out of Mind. But not only is the close reading of these lyrics/poems (the distinction won't matter after awhile in the author's pleasant company) impressive, but this is also a very funny and very warm book. There's nothing cold or academic about it. And there's no psychobiography, or any biography at all. This is Bob Dylan stripped to his most essential gift, his words. It's an absolute joy to read and I recommend it unreservedly, even to those of you (or especially to those of you) who may have been put off by the singer's voice, or his associations with Christianity, Victoria's Secret, and the Traveling Wilburys. I'm finding myself pulling out all my old LPs, even the scratchy bootlegs in their plain white sleeves, and listening to them with brand new ears.
Copyright © 2020 Thriftbooks.com Terms of Use | Privacy Policy | Do Not Sell My Personal Information | Accessibility Statement
ThriftBooks® and the ThriftBooks® logo are registered trademarks of Thrift Books Global, LLC