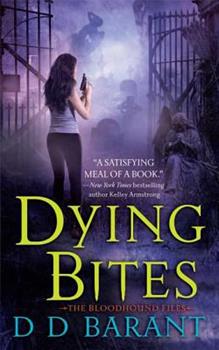 (Book #1 in the The Bloodhound Files Series)

DD Barant launches The Bloodhound Files with Dying Bites --a "fresh and original take on urban fantasy" ( Romantic Times ) with a heroine who's "remarkable, strong-willed and smart" ( Publishers Weekly ). Her job description is the "tracking and apprehension of mentally-fractured killers." What this really means in FBI profiler Jace Valchek's brave new world-one in which only one percent of the population is human is that a woman's work is never done...

Published by Thriftbooks.com User , 12 years ago
I bought this book because I wanted to try out a new author and I'm so glad I did. As a first book in a series there is always room for improvement but DD's writing style and humor, as well as a unique story line, made this book a terrific read. If you enjoy a book that makes you laugh as you get caught up in the story, this would be a great choice. I look forward to DD's next book and hope it lives up to its possibilities. L

Published by Thriftbooks.com User , 12 years ago
Imagine that all the darkest nightmares of humanity wear real in some fall of alternative time line now imagine underappreciated FBI Profiler who get's kidnapped there. Your new NSA boss is a Vampire,the human race (your race) has been declared a endangered species and the lab guys have flees and howl at the fullmoon and worse the world resembles a cross between Mayberry and DarkShadows. And why were you summoned (And I do mean Summoned) To catch a mentally disturber Human Serial Killer who humanity greatest hero. Yep you might be the bad guy. Life bites but Dying Bites more and your nice boss promises he'll throw to street and all the nice cannibalistic citizen unless you do your job.Well at least you got appreciated.

I nearly passed over this book...I'm glad I didn't

Published by Thriftbooks.com User , 12 years ago
Dying Bites - The Bloodhound Files by D.D. Barant I had this book on my wish list and had been hemming and hawing about it. One of the reasons I was so reluctant was that even though it sounded very good, I wasn't sure I could suspend my disbelief enough to imagine a parallel universe; one that consisted of43% Lycanthropes, 37% Vampires, 19% Golems and 1% Humans. Then last week I received this from a friend of mine as part of my birthday gift. I had finished everything else and said "Oh what the heck." I picked it up,looked at the back cover and shrugged, started it, and couldn't put it back down until I was done with it! Let me tell you that it is one of the two best speculative fiction debut novels I have read in this past 2 months and I'm sorry I waited so long to get to it. "Dying Bites" starts with FBI Behavior Analyst and Profiler, Jace Valchek in bed and dreaming after getting a little drunk the night before, and it seems like a fairly typical dream...or is she really dreaming ? Nope, she is not asleep; she has been taken from our reality and been plunked down in another that mimics our own except for the previously mentioned creatures! She is being asked by the head of their NSA, vampire David Cassious, to help profile and catch an insane serial killer, since this universe has no experience in dealing with insanity. Unfortunately, it seems that this killer may be human. Now what is Jace supposed to do? What will happen if she does deliver this human, who may very well be protecting the last 1% of humans left in this universe? But, she has agreed to the contract and the terms state that the contract will be "successfully concluded with the capture or elimination of the target of the mission." Then she can go home. Jace is a kick butt, smart mouthed, protagonist that seems to spend a bit of time having her own butt kicked by things bigger and badder than she is. She is being teamed with a witty, funny and surprisingly sympathetic group, a Golem, a Werewolf scientist/nerd and a Vampire. This book is in first person but you never seem to have any problems knowing what the others are feeling since Jace has a bit of empathy going for her. There is a lack of profanity, but a huge amount of sarcasm and dry humor, since not everything in our world have been the exact same throughout time! Some things just do not cross over well from world to world. The world is easy to understand and the history is sometimes heart breaking. D. D. Barant, should be applauded for having the power to write something that is fresh, stimulating, exciting and funny. I cannot wait for "Death Blows" the next book in this series.

Published by Thriftbooks.com User , 12 years ago
I really enjoyed this novel. Barant's alternate world of forensic animists, sharp-dressed golems, and goth-chick werewolves gets the background details right in a delightful way even as I'm fairly sure Agent Jace Valchek hasn't been told the whole truth about the relationship between her native world and her new one. Everyone has an agenda that colors their story of why she was needed to find the killer she has been brought over to profile, whatever the cost. Even, perhaps, the killer himself? The mystery is compelling, the characters and the cultures drew me in, and I'm anxiously awaiting the promised next installment _Death Blows_. I want to know more about Jace, Charlie, Dr. Pete and the worlds between them.

Fabulous start to a new and entertaining series!!

Published by Thriftbooks.com User , 12 years ago
I was going to wait until later this weekend to buy and read this book, but somehow I just couldn't wait..lol....I don't know about anyone else, but I am totally keen on bloodhounds becoming a new voice in urban fantasy. D.D. Barant has written the first entry to his new series with "Dying Bites"....and let me just say...I am totally sold on it! I found the book well written, entertaining and in some cases downright fun. Fantastic detail in the world building made it much easier to become drawn into the world of Jace Valchek, who I just loved...she is tough, sassy and downright hardheaded when necessary...gotta love a woman who means business! A well thought out mystery and some awesome action makes this a great way to snuggle down to some satisfying reading. Kudos to D.D. Barant for bringing a fresh voice to urban fantasy and for giving me another author to cherish. I look forward with great interest for the next installment to the Bloodhound Files...and much success to a deserving author.
Copyright © 2022 Thriftbooks.com Terms of Use | Privacy Policy | Do Not Sell My Personal Information | Accessibility Statement
ThriftBooks® and the ThriftBooks® logo are registered trademarks of Thrift Books Global, LLC