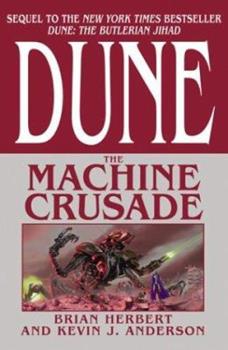 As the struggle against the thinking robots continues, Serena Butler's forces continue their battle and Selim Wormrider and his Fremen outlaws take the first step into becoming the fighters who would change history.

Published by Thriftbooks.com User , 11 years ago
Again, as Dune:House Harkonnen was to Dune:House Atreides, The Machine Crusade is to The Butlerian Jihad. Certainly a good read, a Shocking ending!

Worthy to be a prequel

Published by Thriftbooks.com User , 11 years ago
I have read the "most helpful critical review" of this book. While i respect it i don't agree with it. First of all, i had a great time reading this book. This book was epic, not in the physical sense but in the historical sense, an excellent motion capture of events i would call it. It is obviously different than Dune's writing (the writers saying from the beginning they would not try to imitate Frank Herbert because they would fail). The tackled problems are slightly different (or subtly tackled, but differently), which, to me, is veridical, because you can't expect a perspective on a point of history to coincide with another. Problems of period 1 probably differ of the problems of period 2. Details of the original Dune novels are not forgotten because many threads come together - both important and unimportant threads, which gives a sense of total (and accurate) connection with the components of the original Dune series. Unlike the "most helpful critical review", i felt attachment to characters from this book. One in particular, not a main character, but a character that undergoes a very human transformation and is pointlessly killed towards the end of the novel (i won't spoil :). That particular chain of events, as well as others, prevent this book from being linear as if written by a robot. Random things happened too which is exquisite. Another thing i liked about this book is that it teaches us about how the world works. Intricate political and military plans, all those happen in reality in a manner similar to what was written, i'm convinced. I could also sense the writers' strong grasp of technology, which is pretty cool - it impressed even me and i'm a Software Engineer :) The technological details aren't intrusive, just right and sometimes subtle. Bottom line, what i think should be known is that this book ties many threads which also go through the original novels - from that point of view you could enjoy it as you enjoyed "Star Wars: Revenge of the Sith", you know how it ends, but you want to see how it all happens. But, although i haven't read but a few pages of the "The Battle of Corrin", i can safely say that just as the Star Wars prequel, this prequel can easily be read as an independent science-fiction story. (I liked the Star Wars prequel even though it was obviously different, same goes for this). I think considering these books started from mere notes, i think Frank Herbert would be proud of the added value they bring. Even if my eyes hurt, i started reading "The Battle of Corrin" when i finished "The Machine Crusade" - for me that's proof enough this book matches the definition of 'good' good enough. I want to think of a bad thing to say about this book but i can't find one, and i'll leave it at that :)

Published by Thriftbooks.com User , 14 years ago
A masterfully written book for the true DUNE lover. It helps you put all the pieces together, once you have also read The Battle of Corrin.

Published by Thriftbooks.com User , 18 years ago
Herbert and Anderson continue to write complex stories full of color and surprises; this is one of the best. Other reviewers whine that these new prequels aren't exactly the same as Frank Herbert's style ... and they aren't. The Herbert & Anderson novels are, however, excellent reads in their own right and they have brought a whole new generation of readers to the DUNE universe.

A Trilogy All Its Own

Published by Thriftbooks.com User , 18 years ago
The difference between the Dune books written by Frank Herbert and the prequels written by his son, Brian Herbert, is that they occur in a completely different time. These books are similiar in the fact that they both deal with the legend of Dune, Muad'dib, and the countless other players but the situations are vastly different. I never picked up these prequels expecting them to be immense philisophical tomes but instead I found stories that you would hear around a campfire.. stories of powerful legends and people and history that brings the great novel of "Dune" into focus.What many need to understand when they pick up this novel [and the one before it "Butlerian Jihad"] is that they won't encounter the deep-thoughts of Frank Herbert's books, but instead a far reaching story that must encompass much of the history that came before "Dune". If you go into the novels knowing this, then you will come out immensely satisfied like I did. The stories are rich and the pace of the novel flows like wine. A good wine, one that you will want to taste again and again.I won't divulge important storypoints here because that's best left up to a book report or newspaper review, but instead emphasize that it got my heart racing and I couldn't put down the book for several days. I actually sneaked it into work and read it under my desk when no one was looking.. and on the subway to and from work, I had difficulty not crying "no!" at the book in several instances.. [usually I do not talk to books, but this one left me emotionally enraptured]..Brian Herbert and Kevin Anderson, I feel, are doing great justice to Papa Frank's dynasty. It's amazing that they can wrap all these storylines into whirlwind of rich history... Yes, the book is not "in-depth". It does not try to be what the original "Dune" novels are.. but instead becomes something of its own.. and worth the read..
Copyright © 2020 Thriftbooks.com Terms of Use | Privacy Policy | Do Not Sell My Personal Information | Accessibility Statement
ThriftBooks® and the ThriftBooks® logo are registered trademarks of Thrift Books Global, LLC