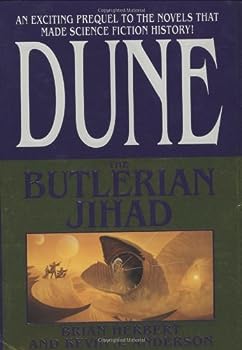 The Butlerian Jihad (Legends of Dune #1)

This description may be from another edition of this product. The New York Times bestselling trilogy is back Brian Herbert and Kevin J. Anderson's prequel to the epic Dune Saga is back in fantastic new reissues, starting with Dune: The Butlerian Jihad . Here is...

Everything I Had Hoped For And More

Published by Thriftbooks.com User , 11 years ago
I realize fans of the original Dune series are very protective of the books, almost religiously so. However, I never read them but have decided to try the series in chronological order based on the Dune timeline, so The Butlerian Jihad was my first book. I must say that I was worried that with such a big cast of characters in such an enormous world, I would be totally lost and confused. However, The writing was very clear and easy to follow. One of the great tricks I'm glad the authors used here were the short chapters. It allowed me to digest what was happening, and at the same time, keep the action moving at a lightning pace. I really enjoyed the characters and the descriptions of the environments of each planet. The book also never felt bogged down by unnecessary details. Everything felt written for a reason and the prose was incredibly smooth to read. There were many clever twists and turns and I found myself giddy with excitement while reading it. Needless to say, I'm completely hooked on this series and plan to read them all -- and yes, that includes the sacred Frank Herbert books too. Thank you Brian Herbert and Kevin J. Anderson for doing such an amazing job!

Published by Thriftbooks.com User , 18 years ago
I thought that this was a very well written book. It describes things that are to come in the future. I did not care for the gore, but it was a part of the story to show the cruelty of the machines. I think this story tells a moral story as well. The slavery of the machines coinciding with the slaves kept on the human controlled planets. I can't wait to read the Machine Crusades.

Worthy of being Part Of The Dune Legend.

Published by Thriftbooks.com User , 18 years ago
Brian Herbert's and Kevin Anderson's House Trilogy introduced me to the Dune Universe. I Picked up House Atreides on a whim and have read the trilogy, then most of the original Dune series. Dune is one of if not my all time favourite sci-fi series (only real competition it recieves is from the Foundation series.)I anxiously awaited the release of this title in pocketbook ( I prefer pocketbooks to hardcover ersonal quirk), and was not disappointed. The successors to the writing of the Dune mythology seamlessly weave a background 10,000 years before the events of Dune take place. The titans, i.e. cymeks ( humans who have sacrificed their human bodies for immortal machine shells for their biological brains) overthrew the empire and years later their creation ominus a sentient computer controls most of the known universe. Pockets of humans are determined to win back their freedom and overthrow their tyrannical overlords, such as Serena Butler, Cena Zufna, Inglis, Xavier Harkonnen and more.The author's not only develop further history further expanding the universe Frank Herbert created, they also draw obvious parallels to classic mythology. The titans Ajax, Barbarossa Agemommon and Juno for instance are familiar names to those that know their Greek and Roman Mythology. They interweave many concurrant subplots as they explore the origins of Arrakis, and sects and groups like the Beneserine(sp) sisterhood. This book is an excellent exciting, multi-layered science fiction tale, no matter how acquainted the reader is to Dune. One of the benefits the authors' have of going so far back into Dune's past is the novel not only answers some questions for the serious Duneophile, but also can draw new curious readers into the legend without them having to read the oringinal series or even the House trilogy to understand whats going on. Well done looking very forward to the second novel.

Published by Thriftbooks.com User , 18 years ago
I really enjoyed this book. I've read two Dune books in the past, but not a true "Dooner". I liked the SF and I thought the characters and story line were very interesting.

Published by Thriftbooks.com User , 19 years ago
Once again I am amazed at the fine job Brian Herbert and Kevin J. Anderson have done with this series of prequels to the classic "Dune". The latest trilogy goes back a thousand years further and shows a lot of the religious and political history that lead to the world depicted in the classic novel. It is one of those books you just don't want put down. It is a battle fought for mankind's freedom, against computers, and Cymeks (which are machines which human minds.) This book touches upon where the hatred between the Harkonnens's and the Atreides originated from which I guess is going to be over a girl. With a new twist which I liked, a Harkonnen is the good guy in this story and an Atreides is one of the bad guys. (The Atreides is too naive to know he is fighting for the wrong side.) Agamemnon who is a cymek general and the father of Vorian Atreides reminded me in ways of Darth Vadar trying to corrupt his son over to the dark side to follow in his foot steps. I must also admit that the first line I heard one of the cymeks (who were twenty titans which ruled the world before the computers took over) make, reminded me of the "Borg" from Star Trek, but I'm glad to say that from then on the similarities ended. (I'm also not sure if the characters name Vorian, known through out the book as Vor is a tribute to Lois McMaster Bujold's Vor novels which are also very good by the way.) The "Omnius" computer who is the head of the computer world is a decent character, but the computer Erasmus who is trying to understand humanity is very interesting, even if he does remind you of an evil mentat. Insights are also gained into the beginnings of the new Empire, the inventor Tio Holtzman and his shields, the original Suk doctor, the beginnings of the Bene Gesserit sisterhood, spice trading on Arrakis, worm riding, and the Bene Tlulax. This novel may also be used to set up several future story lines which could come into play after "Chapter House Dune" to move the series forward instead of the backwards direction it has been heading in. I can't wait for the next one in this new series to come out.
Copyright © 2020 Thriftbooks.com Terms of Use | Privacy Policy | Do Not Sell My Personal Information | Accessibility Statement
ThriftBooks® and the ThriftBooks® logo are registered trademarks of Thrift Books Global, LLC