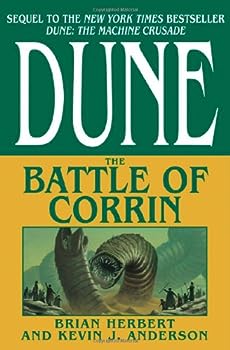 Dune: The Battle of Corrin

This description may be from another edition of this product. Following their internationally bestselling novels "Dune: The Butlerian Jihad" and "Dune: The Machine Crusade," Brian Herbert and Kevin J. Anderson forge a final tumultuous finish to their prequels to...

Published by Thriftbooks.com User , 11 years ago
It has been fifty-six hard years since the events of "The Machine Crusade," Following the death of Serena Butler, the bloodiest decades of the Jihad take place. Synchronized Worlds and Unallied Planets are liberated one by one, and at long last, after years of victory, the human worlds begin to hope that the end of the centuries-long conflict with the thinking machines is finally in sight.Unfortunately, Omnius has one last, deadly card to play. In a last-ditch effort to destroy humankind, virulent plagues are let loose throughout the galaxy, decimating the populations of whole planets . . . and once again, the tide of the titanic struggle shifts against the warriors of the human race. At last, the war that has lasted many lifetimes will be decided in the apocalyptic Battle of Corrin.In the greatest battle in science fiction history, human and machine face off one last time. . . . And on the desert planet of Arrakis, the legendary Fremen of Dune become the feared fighting force to be discovered by Paul Maud'Dib

End of the Machine War

Published by Thriftbooks.com User , 12 years ago
This entry marks the close of the Machine War trilogy, and ties the story-line up nicely. The events in this book will become of prime importance in Hunters of Dune and Sandworms of Dune, which end the original series of Dune novels. Recommended to all Dune fans.

Published by Thriftbooks.com User , 12 years ago
For those who feel the need to use words like "desultory", this may not be the right book series to be reading. People like me who like to be immersed in a story and read just for the enjoyment and escape that it brings (and who have kept up with the Dune epic) will probably love it. If I wanted to analyze the thing to death I could also write a scathing review but I would rather spend my time reading. I'm glad that I paid no heed to the naysayers.

The end of the Machines

Published by Thriftbooks.com User , 15 years ago
The Battle of Corrin is the final installment of a trilogy, a prequel of sorts ostensibly based on the notes and writings of Frank Herbert. For those of you that don't know, trilogy takes place ten thousand years before the time of originator Frank Herbert's immensely popular book, Dune. It is a collaboration between Brian Herbert (Frank's son) and Kevin Anderson. It is the sixth book co-written by these authors that I know of, having just finished another trilogy/prequel, The House series (House Atriedes, Harkonnen and Corrin). Unlike some other reviewers, I found this trilogy to be exceptional. I believe they may be Herbert/Anderson's most accomplished manuscripts. I finally got to experience the distant past, which was vaguely alluded to in Herbert's original Dune series. We get to meet the beautiful, compassionate Serena Butler, who's young son, the murder of which, set off the rebellion, which eventually after sixty-five years brought down the heartless thinking machines. We also meet distant relatives of Baron Harkonnen - Xavier (who is a good and honorable person) then Abulurd and Paul Atriedes - Vorian (the son of the wicked Titan, Agamemnon {a thousand year old human brain in a robot body})and Tio Holtzman (the revered inventor of the Holtzman Effect and other inventions). We experience the last stronghold of free humanity, with The League of Nobles, the fledgling exportation of the spice melange from Arrakis and the precursor of the Bene Gesserit, in the Sorceress's of Rossak. In the final story the pieces start to come together that were the basis for Dune some ten thousand years later as the groundwork is laid for the Harkonnen/Atriedes feud as well as the space guild and mentats As with the original Dune, the authors create numerous civilizations in a Universe dwelling on millions of planets and then embellish it with devious evil characters and their requisite counterpoints. It may be ten thousand years in the past from Dune but they are every bit as advanced to us, as we are to Cro Magnon Man. Conclusion Personally, I cannot understand why so many readers want to burn this series at the stake. I found this book, consisting of 704 pages, to be an riveting read. True, the chapters are numerous and short but the story is ambitious so it couldn't be overly detailed, or the book would have been unwieldy. We are, after all, talking about a Universal Epic in which the authors followed about fifteen main characters on six different planets and in space. As with Dune we are treated to an excellent page turning science fiction novel with religious undertones. As a reader it seems to be in vogue to criticize this trilogy. As a writer I can tell you that these authors did a wonderful job of juggling this very complex story and telling the story without being confusing and finally closing an open chapter of the Dune Saga. Personally I am in awe of their accomplishment. I suggest that you read this with an open mind and don't pre judge the

wonderfull setup for the first Dune

Published by Thriftbooks.com User , 17 years ago
This book is the best of the three. It really set up the plot for the first Dune book. I am going to reread the first Dune book to see what I missed. Can't wait for the dune books after Chapterhouse come out.Thank you Brain and Kevin
Copyright © 2020 Thriftbooks.com Terms of Use | Privacy Policy | Do Not Sell My Personal Information | Accessibility Statement
ThriftBooks® and the ThriftBooks® logo are registered trademarks of Thrift Books Global, LLC